Knight of Wands (Devices of War #2) by S.M. Blooding 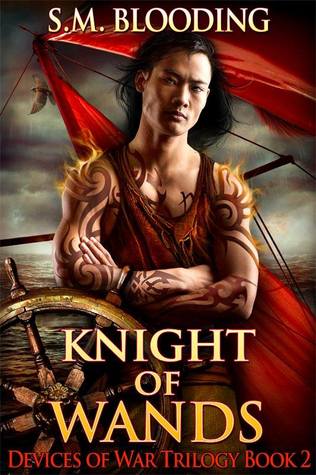 Return to a world of mind blowing visuals, heart stopping action, and ships that sail the skies.

Nix, Queen of Wands, has exactly what she wants—Synn El’Asim, the greatest Mark the world has ever seen. Even though she bound his soul to hers, he is not easily controlled. If she wants him, she must do the one thing that pains her most. Let him go, and give him what he desires. Peace.

Armed with a treaty bearing Nix’s seal, Synn sets off to bridge the gap between the world’s two reigning tyrants—the Hands of Tarot and the Great Families. He struggles to trust Nix as he fights for control of his soul. He’s going to need every ounce of restraint when dealing with his mother, leader of the Great Families. She will not give up her power without a fight. Nix will honor her treaty only if Synn agrees to become her knight. His mother refuses to sign the peace agreement if he falls into the queen’s control.

Frustrated, Synn does the one thing neither woman saw coming. He invites all the tribes, currently voiceless in the war between these two ruling tyrants, to partake in the treaty negotiations. All they have to do is prove their worth in his Peace Games. As Synn’s influence and subsequent power grows, a new fight begins.

Who will control Synn’s League of Cities? Can he protect more people as a leader of the Great Families, or as the Knight of Wands?

Can be read as a stand-alone. But here it is Book#1: 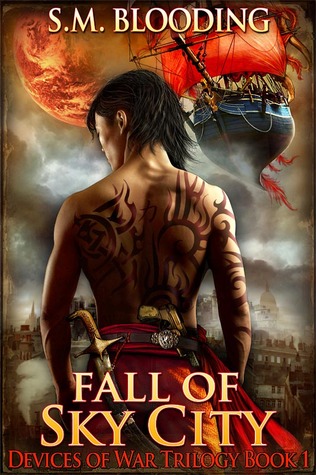 In a world governed by the opposing forces of the mystical House of Tarot and the tribal Great Families, Synn is caught in the crossfire. He witnesses the slaughter of innocent people, and the devastating murder of his father. This act awakens his Mark of power, a Mark greater than any the world has seen in a very long time.

Queen Nix thought she won a great prize when she destroyed Synn’s father, the leader of the strongest Great Families. She had no idea she’d be doubly blessed by capturing his son. However, before Synn can become her treasured weapon, before she can use him to bring the rest of the world to its knees, she must break him and bind his soul to hers.

She does her job with brutal brilliance. Synn’s mind is broken and his soul is seared to hers in an unbreakable bond.

That doesn’t stop him from wanting to be free. She may have broken his mind and claimed his soul, but he will find a way to destroy her.

Experience a world of ships that sail the clouds and cites buried beneath the ocean, and survive the fiery battle brought forth by those who control the forces of nature!

Dyna met us in the main room to the House of Swords, a piece of parchment in her hands. She raised an eyebrow, lifting the parchment. “Good work. I never imagined you’d be able to perform this well, and so quickly.”

I didn’t know what she was talking about and didn’t want to find out. “You promised me safe passage.”

Dyna nodded, her gaze never leaving mine. “How does it feel to be her knight?”

I stopped several feet away from her. “I am not.”

“According to this, you are.”

I took the paper from her. What was she talking about?

“Read it out loud,” Carilyn muttered. “I want to hear.”

I swallowed. “’Effective immediately, the boons for any known or previously known persons caught in action directly against the Hands of Tarot are hereby dismissed. No conflict of any sort shall be permitted with or against those who do not support the policies or practices of the Hands of Tarot.’”

“’The Seven Great Families are once again free to take to the skies and oceans. All ports are again open for trade, pending the treaty as written and negotiated by Synn El’Asim Primus, Knight of Wands and leader of the El’Asim.’”

I had to stop there as a chill cascaded down my spine. So this was what she’d wanted all along. She knew I’d refuse. She wanted me to remain leader of my tribe. She’d orchestrated this entire thing. I’d been nothing more than a puppet. Now she wanted me and the second most powerful tribe of the Seven Great Families under her control?

Carilyn scratched her cheek. “What did you do in there?”

I couldn’t stop staring at the paper in my hands. “I didn’t negotiate a treaty and I did not become her knight.”

“No,” Nix said, walking through the doors behind me.

I turned on her. “How did this get here so soon?”

“You walk slowly.” Nix stopped in front of me and took the parchment. “I sent out a broadcast along all our normal frequencies. My dear sister simply had her communications officer write it down.”

I stared between the two of them. My heart felt like a rock. My head buzzed at the full impact of the trap’s punch. If she’d sent this out on all their normal frequencies, the Families had intercepted the message. They would all think I’d become the enemy.

Nix’s lips twisted in a smile. “Exactly, my dear, Primus.”

SM “Frankie” Blooding lives in Colorado with her pet rock, Rockie, and Jack the Bird. Jack has refused to let her to take up the piano again, but is warming to the guitar. It might help that Frankie has learned more than two strings. She’s added a few more Arabic words to her vocabulary, but don’t invite her into conversation yet—unless, of course, you’re willing to have a very . . . slow . . . conversation.

Find out more about her at: