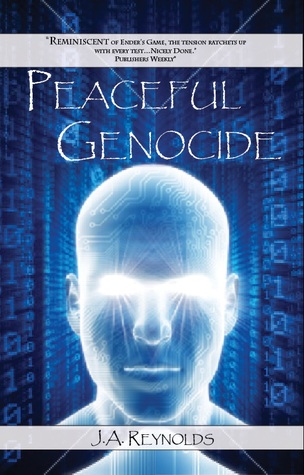 Seventeen-year-old Mitzi and Deuce can recall how many drops of water were on a leaf from a rainstorm five years ago and conversations from last week, month, or year. They have the ability to remember every second of everyday—since birth.

This gift has blessed Mitzi with a history of being sexually assaulted by researchers and abused by her own parents. She trusts no one. Likes no one. Deuce, however, is a high school standout. His gift has made him a superstar on the football field and his memory promises him endless opportunities.

When they both end up at an Alzheimer’s research facility under false proviso, they quickly realize this place isn’t what it seems to be. They endure crazy military-style tests, are forcefully drugged, and complete real-life simulations that haunt them.

Publisher’s Weekly reviewed the unpublished manuscript and said it’s, “Reminiscent of Ender’s Game, the tension ratchets up with every test…nicely done.” How do you feel about your book being compared to Ender’s Game?
Full disclosure here: I’d never read Ender’s Game before I wrote Peaceful Genocide, so I had no idea what the reference meant. Space Opera isn’t a genre I read a great deal of. I did, however, read it shortly after. When I learned of its popularity, I was flattered, but then I was worried because I wondered if I copied a book I hadn’t even known about. I mean, it happens more than you think. Fortunately the books are nothing alike. I can see an underlying correlation (not going to give you spoilers), but the books themselves are quite different.

How did you come up with the idea for Peaceful Genocide?
I have a daughter who is an avid reader and I was always amazed with her literary choices in elementary school. Instead of girly books, she always picked up action/adventure, sci-fiction, etc. I wanted to write a book for her, something she would pick up and love. Peaceful Genocide was the product of that.

Is there a message in your novel that you want readers to grasp?
The beautiful thing about writing a story is that different readers interpret things differently. I like to think there’s a message in the book, but what that message is depends on who is flipping the pages.

A tank-sized, stiff old man loomed over her. “Congratulations,” he said. “You have passed your test.”
She jumped to her feet, a little wobbly and shaken, but mad as hell. She rushed the guy and shoved him in the shoulder. To her shock, her hand went straight through him and she smashed into the wall. She spun around. “What the fuck was that?”
The man’s face didn’t flinch and he stepped back in a lazy manner. In another blink, the man was gone.
Great. This place was ridiculous and bound to get Mitzi killed. No Christmas present for her parents this year. Not that she would’ve gotten them one anyway.
The little room she was in only had one white door. She groaned, already tired of these games, and stepped through it.
Another room came into focus. Clean, white, sterile. She could deal with that. Voices echoed around her. Taking hesitant steps, she followed the only hallway that led away from the door. As she walked, the layout imprinted in her brain. The flicker of the recessed lights overhead. The speckles in the floor beneath her. The grainy steel walls at her sides. She would remember every detail in perfect clarity, down to the tiny specks of dirt along the edge of the wall.
After a few short strides, the hallway opened into a room with plush red carpet, overstuffed chairs, and a long wooden table. There were only two doors in this room: the one she came in, and one by a small platform in the back. Twelve circular lights surrounded a black air vent in the middle of the room. She put the image of the room in her mind, matching it with the others areas of this place she could remember. Over time, she would create a diorama in her head. She’d learned from past experiences that the more she knew about the place she was trapped in, the better her chances for escape when shit went south. Not that she thought she’d be able to escape a detention center … but she could try. Then again, this place was already feeling very out-of-whack for a detention center.
There were three people leaning comfortably against the table. The tallest one, a buff kid with ragged brown hair, eyed her. His eyes, grey as the silver moon, reminded her of a hunter. Serious and determined. And cute. She had to admit he was cute. In that I’m-better-than-you-because-I’m-better-looking-than-you way. All jock. All cocky. Which was so not her type. He was the type she normally punched in the face after he tripped her in the school hallway.
“Took you long enough,” he said.
Another person, an impish girl who looked like she was getting ready to jump out of her own skin piped in. “Who got the best time? Me? I know it was me!”
Buff-kid let out a rumbling laugh. “No way. I was here first.”
Mitzi rolled her eyes.
“You look like someone dumped you out of a trash compactor.” This from a kid, maybe thirteen, with bright red hair and toffee skin. That was an odd combination.
“Whadoyou care?” Mitzi rubbed her sore arm and deposited herself in the nearest seat. Too bad it was only a few feet away from the entire population of Idiotville.
“What’s wrong with your hair?” Imp girl reached out and touched Mitzi’s hair.
Mitzi smacked her hand away. “Don’t touch me.”
The girl’s blonde hair fell over her pale blue eyes as she ducked and spun away.
“Hey.” Buff-kid bumped Mitzi’s shoulder. “No need to be rude.”
Mitzi flared her nostrils, jumped out of her seat and shoved him. “You don’t touch me, either.”
“Whoa! Whoa!” Red head boy stepped between them. “No fighting. We don’t even know what’s going on. No need to be at each other’s throats already.”
Buff-kid nodded. “Ralph’s got a point. But you, Smurf girl,” he pointed a sharp finger at Mitzi, “need to be nicer.”
“No name callin’,” Imp blondie called out from under her curtain of hair.
Mitzi held up her hand at the band of misfits. “Here’s an idea— stop talking to me.” She slid back down in her seat.
“The name’s Deuce.” Buff-kid held out his hand. Mitzi didn’t take it and he dropped it to his side. “This is Ralph.” He pointed to the redhead kid half his size. “And I think her name is Rose or Violet or something.”
“It’s Paisley,” the blonde girl stated.
“Whatever. I knew it was some kind of flower.”
Mitzi barked a laugh. “It’s not a flower, idiot. It’s a tear drop pattern shaped like a kidney originating from India.”
The boy who had identified himself at Deuce scrunched his face. “Well, whatever. What’s your name?”
“Mitzi.”
The redhead boy named Ralph chuckled. “What kind of name is that?”
Mitzi glared at him. “Jewish. So what?”
“I think it’s pretty,” Paisley said.
Ralph shrugged his small shoulders. “Nothing. I was wondering if it was short for something. Jeez. Chill.” He turned and whispered something to Deuce. Deuce gave a lop-sided smile.


Great. Eight weeks of detention center bonding with these morons and she would go crazy.

Goodreads ** Amazon
About the author:
JA Reynolds lives in the Midwest with a normal family, raising a normal daughter, with some abnormal pets. It’s extraordinarily ordinary.

This book sounds so cool! I love this combination between YA and thriller.