Magick and destiny intertwine as he fights to save his kingdom and the goddess he loves.

Her kiss…the feel of her skin…the beat of her heart…For seventeen-year-old Kellen St. James, each memory is marred by a single sentence on a lone strip of paper.

Cali has been taken…

Armed with an amulet that channels the ultimate power of Faerie, Kellen searches for his love. However, control of the amulet’s energy comes with a price, and Kellen soon learns that Cali’s captor has plans for the stone. With the threat of the Star Catcher’s evil looming above Kellen and his kingdom, he’ll have to free the Heart of Faerie and break the curse the binds the Children of Danu to the darkness. But before that, he has to find his real father, the king. No pressure, right? Kellen and Cali will battle bewitched armies and unknown foes as they fight to stay together. Will Kellen embrace his immortal destiny? Or will his world, and the man he is fated to become, be destroyed by The Star Catcher?

"One of the best endings in a trilogy I have seen in a while. Fans will not be disappointed!"-Jackie Jackson, The Book Maven

Read the books that started it all...
. 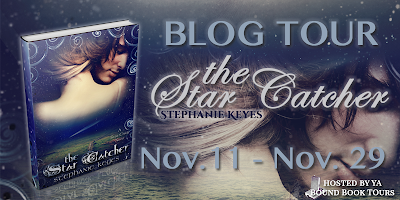 Featured Playlist Song
Kellen's best friend, Gabriel Stewart, was originally supposed to be a bit part. I almost didn't write him into the second book, The Fallen Stars. However, after catching a reader review on Goodreads, I recognized how much readers identified with Gabe and I couldn't leave him out. In The Star Catcher, I wanted to give him a love interest and thus Rowan's daughter, Singer, was born. The song I chose for them was Explosions by Ellie Goulding.

“I’m gonna kiss you, I think.” I am a total loser. Why do I always need to talk out loud about everything I do before I do it? She nodded, dropping her gaze before returning to meet my eyes. “That would be cool.” “I mean, I know you can be an immense pain in the ass and everything.” “Your window of opportunity is closing fast, Stewart.” Singer’s sarcastic voice did return, then. “If you’re gonna kiss me, I’d shut your yap and get on with it.” Sliding my hand behind her head, I leaned in and kissed her. I’d expected it to be awesome, the moment our lips touched. However, I don’t think I got that Singer’s kiss would set my chest on fire, like a good jar of salsa. I also didn’t know that when I kissed her, I would fall in love with her. I stared at her, unable to believe my own thoughts. Those feelings sorta snuck up on me like a pair of briefs that shrank in the dryer.
About the author:

Stephanie Keyes has been addicted to Fantasy since she discovered T.H. White as a child and started drumming up incredible journeys in her head. Today, she's still doing the same thing, except now she gets to share those ideas with readers! When she's not writing, Stephanie is also a graphic designer, international speaker, teacher, musician, avid reader, and Mom to two little boys who constantly keep her on her toes. In addition, she's best friend to her incredible husband of eleven years. Mrs. Keyes holds an undergraduate degree in Business and Management Information Systems from Robert Morris University and a M.Ed. from Duquesne University. She is a member of the Society For Children's Book Writers and Illustrators (SCBWI), as well as a featured author in the global group of writers, Love a Happy Ending.com. Keyes is the author of the YA Fantasy series, The Star Child, which currently includes The Star Child, After Faerie, The Fallen Stars, and the soon to-be-released finale, The Star Catcher (November 2013), all from by Inkspell Publishing. Mrs. Keyes is hard at work on a new YA Paranormal Romance.

So for this giveaway, we're releasing several cool items. Let me tell you about them!

Thanks so much for hosting The Star Catcher today!