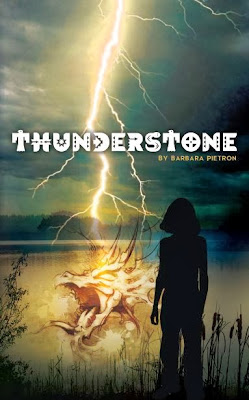 Sneaking out at night, driving without a license, and falling for a guy weren’t things fifteen-year-old Jeni expected to do while visiting Lake Itasca, Minnesota. Then she meets Ice, the local medicine man's apprentice. Suddenly, her simple family gathering becomes an exciting – and terrifying – week of self-discovery. At first Jeni doesn't believe Ice's claim that she can touch the spirit world and has somehow released a mythical underwater monster. However, she's forced to reconsider when a teen swears a monster killed his father while fishing on the lake. Just as she comes to accept truth, Jeni finds she is the only one who can imprison the monster, making her the creature's next target. She'll need immense faith in her newfound ability to put herself in harm's way and face down the monster. And even if she succeeds in delivering the local population – and Ice – from the creature's wrath, there is no guarantee Jeni will escape with her own life.

Jeni stood at the top of an embankment overlooking a lake. Although thick clouds blotted out any chance of moonlight, distant lightning outlined the figures of Ice and an older man working their way along the shoreline. She'd never met him, yet Jeni was certain the older man was the medicine man, Nik.

As they drew closer, Jeni could make out Ice’s anxious face. "Will we have any influence without the statue?"

The medicine man carried some sort of pouch or bag and wore a worried frown. He patted the bag. "Medicine men have other tools." His tone sounded as though he was trying to convince himself.

They stopped at the base of the bank. Nik rummaged in the bag, removing items. He gave Ice a pack of cigarettes. "Open them," he instructed, placing the other items in easy reach. "Give me five or six." Nik tore the filters off and emptied the tobacco on the sand in a trail from the water to the embankment. He disappeared for a minute and Jeni dropped to hands and knees to peer over the edge.

A flash of lightning showed a rough opening in the bank amidst rocks, sand, and brush. Ice’s voice drew her attention. "Will this draw the manitou-" A rumble of thunder drowned out the rest.

"-ancestors used tobacco to mollify him or show respect, so it should at least get his attention," Nik answered. "His motivation however, is hunger. And greed."

Nik and Ice climbed the bank and laid flat in the brush, peering through the foliage. The forest behind them moved in the wind of the coming storm. Nik nudged Ice and they studied the lake intently. Jeni gazed across the water and saw two sharp points pierce the surface of the lake. They drifted toward shore, followed by a large snake-like object.

Jeni’s eyes grew wide as the enormous head protruded from the water. Cunning, elliptically-shaped eyes scanned the shoreline. Black liquid streamed off the creature's scales as it extracted itself from the lake.

It was her statue come to life.

The dragon-like monster maneuvered its considerable bulk across the strip of sand to the opening in the bank. As soon as its head was inside, Nik and Ice silently descended the slope. They perched on either side of the hole marking the beast’s progress. The medicine man raised something in his fist and looked to the sky, his lips moving noiselessly. Soon, only the creature’s massive tail remained visible.

Without warning, the monster’s tail lashed to the left, slamming Ice hard against the rocks. His unconscious body slumped to the ground. Jeni winced and cried out, though she made no audible sound. In a fluid motion, the tail swung back to the right and caught Nik under the arms. It lifted him from the ground and flung him out into the water.

Terrible laughter resonated. "You have no power over me." The voice came from everywhere – penetrating her skull and sending an icy shiver down her spine.

The beast disappeared. Poised to jump, Jeni jerked backward, realizing the creature had turned around. The snout emerged from the cave opening and its mighty jaws clamped over Ice’s limp form. Screaming soundlessly, Jeni scrambled to the shoreline. She grabbed for Ice’s arm, her ghostly fingers passing right through.

The underwater manitou plunged into the water, sinking beneath the surface.

Horrified, Jeni gaped at the swirling water and Nik’s figure bobbing facedown nearby. Suddenly the bestial tail spiraled up out of the water and smacked down over Nik’s body, curling around him and taking him to the depths as well.

After years in the corporate world, Barbara found herself with a second chance to decide what she wanted to be when she grew up. Her lifetime love of books and the written word returned one answer: writer. Drawing from her experience with technical writing, she began by writing non-fiction magazine pieces and achieved both regional and national publication. Her success encouraged her to complete a novel. She learned much from her first manuscript, critiques, books, contests, and blogs. In 2012, her novel Thunderstone, was a quarterfinalist in the Amazon Breakthrough Novel Award contest and won a critique by Publisher's Weekly. A few months later, she was offered publication by Scribe Publishing Company.

Barbara has a few other novels in the works, including a Thunderstone sequel. If she's not reading or writing, Barbara likes to walk, garden, and sew. She works in a library and lives in Royal Oak, Michigan with her husband, daughter, and their cat – who often acts like a dog.

I really want a copy of this book. I have been following the reviews closely and they all make me want a copy even worse. Sigh. Oh, the agony.

I want to know what is a Thunderstone. Need to read this book.

It sounds really good and it caught my eye!