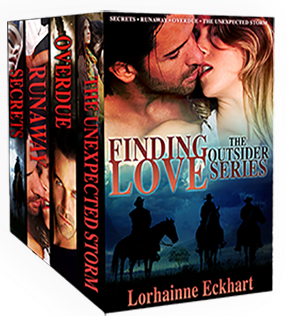 A husband's secrets, a runaway wife, a troubled pregnancy, and an unexpected Storm all these stories included in the next sizzling romantic box set of Finding Love ~ The Outsider Series

*Warning this series is filled with rough language and sexual tension that may be offensive to some.

From the #1 Amazon Bestselling Author in Westerns and Western Romance THE FORGOTTEN CHILD, comes the next volume of Finding Love~THE OUTSIDER SERIES with the exclusive short story Overdue.

Secrets: "Jed always told me he'd take care of everything. And I believed him, I trusted him, I loved him."
Runaway: Andy sets out to find his runaway bride. And when he finds her he's in for a big surprise.

Overdue: (Exclusive to this box set - A Runaway to The Unexpected Storm bridge short story - Diana and Jed are having a baby.)

The Unexpected Storm: He can have any woman except the one he wants.

Laura’s hair had started to grow out and was now shoulder length, and she kept it tied back in a high ponytail.

“Diana, I don’t know how to thank you and Jed for all you've done.

“It’s not much, but I think it’s kind of fun and cute, and Jed and I will be right next door if you need us.” Diana pressed her hand into the small of her back and rubbed her other hand with her gold wedding band over her almost eight months’ pregnant belly.

This place is better than I could have hoped for. I love that clean smell of new wood.” Laura took in the brand new loft, which had an antique double bed for her and a single bed for Gabriel, with lovely pink and green bedspreads. It was an open design, tastefully done, and even the appliances were brand new.

She set her purse on the round kitchen table with four chairs. At the west side of the loft was a cozy living room with a green taupe sofa and chair and a plasma TV mounted to the wall.

Footsteps clattered up the stairs. Laura gazed over the wooden rail, watching as Jed followed Gabriel and redheaded Danny, who was just walking and insisted on mastering the stairs all by himself and yelling at the top of his lungs,

“You've got your hands full with Danny there. Does he ever stop, Diana?”

Laura smiled as she listened to the clomp and clatter of three boys: her five-year-old boy, Gabriel, who leaped up the steps; Danny, who crawled and patted each step; and Jed, who followed, encouraging his son.

“One more. Come on, you can do it.” Jed was grinning ear to ear, watching as Danny pushed himself to his feet and ran straight to his mommy.

“He’s a Friessen man; ‘slow’ and ‘easy’ aren't in their vocabulary,” Diana muttered just as Jed stepped closer and lifted Danny, tossing him in the air while he giggled and wiggled. Then Jed leaned down and kissed Diana.

“That’s not fair. I guarantee you I can take it slow and easy in some things you enjoy.” He winked, and Diana gasped before clearing her throat.

“Laura, listen, I am grateful you've taken this job.”

“Diana, Jed, I really do appreciate all this—and the job, even though I’m pretty sure you don’t really need me.”

“Tell you what, bud. Let’s let your mama get settled, and you come help me feed the horses,” Jed answered. The sound of a vehicle pulling down the driveway had him stepping toward the window.

“The fact is, Laura, we’re the ones who are grateful,” Diana said. “Jed wants to be on a horse, riding, teaching the kids, not cooped up in an office, doing paperwork. And I have my hands full with Danny and this one here.” She rubbed the baby she carried in her large belly. “And I’m tired, too....”

“Well, I was wondering when he was going to show up,” Jed interrupted. Danny just then decided he wanted down, so Jed slung him over his shoulder to distract him.

Laura felt a flutter of butterflies in her stomach when Jed glanced at Diana with a look that had her covering her mouth with her palm and turning away.

“Gabriel, come back here!” Laura said, but this time he did not listen, as he was out the door. She could hear him call out, “Andy, Andy.”

Laura went to the window and gazed out at Andy, dressed as he always was in dark jeans and a long-sleeved dark shirt, but he was not as neat as usual. He lifted Gabriel in his strong arms and hugged him.

“You know, Andy has a lot of faults, but caring for Gabriel is not one of them.” Diana was standing in the window, watching as her husband approached Andy. “I knew it was only a matter of time before he found out you were here. He was served this morning, too. He will be furious, Laura. It was cold and impersonal.”

“Diana, I don’t want to see him again, ever. I just want him gone and out of our lives for good.” Laura stepped back when Andy glanced up with those all-seeing hard blue eyes. At times, she’d swear they were etched in steel.

“Laura, how he treated you was horrible. We know that, and we all agree with you, but you can’t keep avoiding him. He’ll find out.”

Diana turned solemn blue eyes on her. She’d been a true friend who was always there for her, even with her husband recovering from surgery. It had been a miracle when he came through okay, and Diana had even told Laura that life was too short for regrets.

“How does he know? You and Jed promised me you wouldn't tell him,” Laura pleaded.

“Yes, we did, but don’t forget that Andy’s been having you followed,” Diana said. “I have to tell you, Laura, my husband doesn't agree with your decision. He’s honored it for now, hoping you’ll come to your senses. Andy does have a right to know where you are. You should know he’s offered to talk to Andy for you, too.”

Laura felt a surge of anger shoot like a rocket through her as she processed what Diana had said. Her face felt warm, and beads of sweat popped out over her brow. She squeezed her fists. “He’s been having me followed? Are you kidding me? What kind of sick—”

She didn’t hear him come up, and what made it worse was that he was carrying Gabriel, who, by the looks of it, had no intention of allowing Andy to let him down. She could see how her son worshiped Andy, and that infuriated her. She was standing beside Diana, and it wasn't until Diana stepped back that Andy’s eyes widened and his brows furrowed with something dark and furious.

Laura pursed her lips and struggled with those damn emotions, second guessing everything she’d done, and placed her hand over her own large, swollen belly just as the baby kicked. 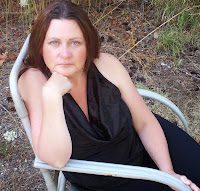 2012 was an amazing year in the publishing world for me, and it started with The Forgotten Child, which landed on the Amazon bestseller list for western romance and romance series. 2013 has seen me posted in the top 100 authors on Amazon for romantic suspense, mystery/thrillers, and police procedures. Where did it all begin? In 2008, I published my first novel, The Captain’s Lady, a contemporary military romance, through The Wild Rose Press. I’ve since received the rights back from my publisher, and I rewrote the book and republished it with a brand new title, Saved. I write edgy romantic suspense (Walk the Right Road Series), western romance (Finding Love ~ The Outsider Series), and young adult mystery, and I warn my readers to expect the unexpected. I’m a mother of three children and we live on a small island in the Pacific Northwest. I encourage you to contact me by email; I do answer every email I receive. Stay tuned. There is more to come from the Walk the Right Road Series and Finding Love ~ The Outsider Series, as well as a brand new western romance series coming later this fall, The One. And to my readers and all of you who have shared my stories with your family and friends, a big, heartfelt thank-you.

Author's Giveaway
a Rafflecopter giveaway
Posted by CCAM at 12:40 AM