she had reveal her secret. - Just Kylie by Monique Gooch

With much disdain she pushed him away. Kylie had to come clean and reveal her secret. Kylie Bransford was biological born a boy, but lived as a girl. She just hoped Myles could see past her situation and like her for who she was and not what was in between her legs. 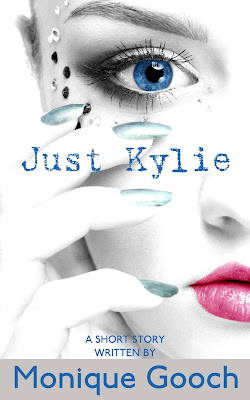 Kylie Bransford was all girl. She loved her long black hair that touched her lower back, and refused to cut it no matter how much her mother pleaded. She wore pink sneakers on the field when she cheered, her room was surrounded by mermaids, and her walls were decorated in pink and purple shades. She was "all" girl.

Kylie loved to be on the go and in the know. The only thing that made not only her world, but her heart stop was Myles Russin. Myles was one of the cutest boys in the 8th grade. The night she invited him over to watch television was the night she knew for sure she’d receive her first kiss. Her tongue trailed the braces that shielded her teeth as Myles leaned forward with his eyes closed. With much disdain she pushed him away. Kylie had to come clean and reveal her secret.

Kylie Bransford was biological born a boy, but lived as a girl. She just hoped Myles could see past her situation and like her for who she was and not what was in between her legs.

Kylie
“Just so you know, your friends are watching us,” Myles said with a meek smile, nodding toward the gaggle of girls behind her. Kylie glanced over her shoulder at her friends who were giggling. Kylie sank her teeth into her bottom lip, but closed her mouth quickly, embarrassed by her pink and silver braces. She couldn’t wait to get those things off, but that would be another two years. Kylie raked manicured shaky fingers through her thick raven locks that hung down her back.

She couldn’t believe it. Myles was actually talking to her. Myles Russin, the cutest boy in the 8th grade. Was this what flirting felt like? Her palms began to sweat.

Myles turned ten shades of red and smiled a face-splitting grin. She grinned to herself. He couldn’t hide his excitement if he wanted to. “Th-they do?” He glanced at her friends again. They continued to snicker. “Wh-what do you think?”

Kylie suppressed her laugh and glanced down at her pink high top Sketchers. She stole a quick peek at him, and tucked a loose strand of hair behind her ear, revealing her mermaid stud earrings. Myles was one of the tallest boys in the 8th grade, much taller than she was. His voice was starting to deepen, just like Mrs. Vance taught them in sex-ed class last quarter. Kylie thought he looked like a model or better yet, a movie star. The bell rang snatching her from her trance. She realized she'd been gazing into his hazel eyes. Awkward.

“Um, maybe we can hang out one day.” He cleared his throat as his voice squeaked slightly.
Kylie’s pulse quickened. “Really?”

“Yeah really,” he playfully nudged her shoulder. “I think you’re cool. We should hang out.”
“Okay um, well you could always come to my house to watch TV or something. My mom won’t mind.”
“Cool,” he responded looking down at his feet. The blush in his cheeks gave him away. “Wh-what about this afternoon?”

She immediately pulled out her smartphone. The second bell rang, indicating they had two minutes to be in their seats. “Er—let me text my mom.” She began typing furiously.

“Okay, just let me know.” As he began his journey to class, her phone buzzed. The returning text from her mother said, Absolutely not! I will not be home until 6 o’clock. No boys unless I’m there.

She looked up from her phone and stopped him, “Myles.”

“Yeah?” He turned. His sneakers squeaked against the tile floor.
“My—my mom just texted back.” Kylie stuttered.
“Is it cool?” He looked hopeful and clutched his backpack tighter.

Kylie glanced at her phone again. The words on the screen stared back at her, “Absolutely! It’s totally cool.” She fired off her address and time to meet at her house.

About the author:
Monique grew up in the Bluegrass state and currently resides in Music City. She is the author of New Adult and Adult Commercial Fiction. Monique also hosts her own writer's critique group in Hermitage, TN. She also offers editing services and serves as a beta reader and critique partner to other aspiring writing and established authors. She recently edited her first screenplay, "Sunset Unseen" written by Reynard Martin. "Sunset Unseen" went on to win an award at the Atlanta FIlm Festival. To learn more about Monique Gooch, please follow her on social media.

Intriguing topic, I haven't read a book like this yet.

I really enjoyed reading the excerpt! This book sounds like a very interesting and intriguing read! Also, I really like the book cover! Very engaging and eye-catching! Looking forward to checking out this book!