"A true page-turner! [...] The afterlife in this story is not like anything you imagined but once you get the hang of the various fractions and religions that populate Gina’s world, you will find yourself swept up in the story and find it hard to put the book down. I thoroughly enjoyed reading this novel and I look forward to reading the next book in the series." - Sandy, Amazon 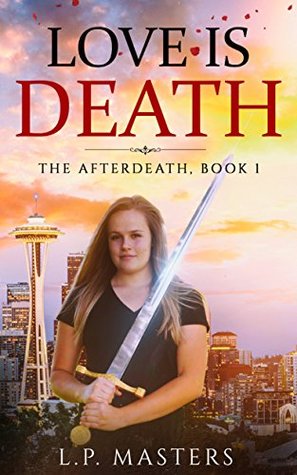 Gina’s plan for her afterlife is simple: survive as long as possible.

The afterlife is a ghost-kill-ghost kind of place. When she meets newly-dead Alec, she can’t help her desire to protect him. Before she knows it, she finds herself falling for him, despite the little voice in her head telling her it’s a bad idea. Alec’s goals don’t mesh well with Gina’s plans.

Determined to save his living sister from a murderer, he’s willing to disobey the laws of a well-established cult in the afterlife. If the cult finds out, they’ll kill him. Again. He’s hesitant to accept Gina’s help and threaten her afterlife, but he’s guaranteed to fail without her.

Together they embark on a perilous mission, but the most dangerous aspect of all is the threat of falling in love.

Because in the afterlife... love is death.

He bit his lower lip and shook his head. "Nothing."

He was lying. Something was bothering him, and that was dangerous.

I heard a rare sound: birdsong, but it was clear, not muffled, which meant it was a ghost. I searched for it. There!

"Look, quick." I pointed at the ghost of a black-capped chickadee a few feet away.

Alec smiled. The little bird twittered in its usual way and hopped across the grass, head turning in jerks like birds always do. It took wing, and I knew what that meant.

In the middle of a flap the bird disappeared. Its water dropped and splashed on the grass, and for a moment the afterghost continued to fly, swooping and twisting in the air before it disappeared as well.

"What the…?" Alec looked shocked.

"Birds don't stay in the afterlife. Not for long."

"Soul sickness. They get here, realize there is nothing like them around, and they get sick." I held my breath. "The same can happen to you if you're upset about something."

Alec looked me in the eyes. His stare was intense, as if he wanted to tell me something. Then he tore his gaze away. "I'll be fine, Gina."

I wanted to swear. He wouldn't be fine. I could see it. I could feel it. He was going to die again if he couldn't get himself out of that mood.

About the author:
Born and raised in the rainy streets of the Seattle Area, L.P. Masters spent her fair share of time staring out rain-streaked windows and writing books. Masters has always had extremely vivid dreams, which often spark inspiration for her novels. In 1999, after one such dream, Masters began her first writing project. She has participated in National Novel Writer's Month every November since 2010. Writing isn't the only thing she can do with a pen in her hand, she also enjoys sketching and drawing—with varying degrees of success. Masters now lives in the slightly-less-dreary city of Spokane Washington with her husband and two wonderful daughters.

In the afterlife, you fight for your...what, exactly? Anyway, I suspect that after this life it's curtains.

This book sounds exciting and very different from what I pictured the after life being.