"I loved this book, I kept me hooked all the way through, the only negative I could find was one scene near the end that’s quite a biggie, I felt it could have been longer, but I still loved the book as a whole so it didn’t detract that badly. Thank you Randi Perrin for once again writing an amazing story." - Sara, Goodreads 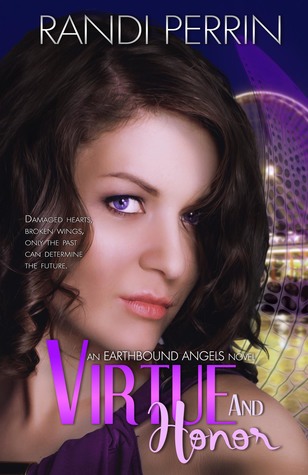 Damaged hearts, broken wings, only the past can determine the future

Angela Waters juggles two high-stress jobs: nurse and earthbound angel. On a rare girls’ night out, she intervenes and saves the life of Mason Kearney, a stripper with southern charm and a secret. It’s a move that will force her to contemplate why in all the heavens she puts up with the injustice of being an angel, which leads to a bombshell that challenges everything she’s ever known.

In the midst of falling for the Alabama boy, she’s in for the fight of her life when a demon, hell-bent on taking her wings, shows up at the most inopportune times.

With a family of angels rallying behind her, she’s sent on a mission to learn everything about them, herself, and evil, to save all the earthbounds from an untimely demise.

Can Angela survive with her heart and her wings intact?

His gaze seemed to bore through her, all the way through her soul and to her deepest secrets. As if on cue, her back began to itch, the message that she had a miracle to perform and her iridescent purple wings longed for release. She ignored it; after all, he was dancing her way and all thought processes ceased to function.

Maybe Harper was right, maybe she needed to move on. Or at least find a distraction, like the itch on her back.

A low click echoed in her ears. The people around her acted oblivious to the sound, but it rattled through her, setting every nerve in her body on fire. It was the sound of a cocking gun, and she swallowed hard. After three years of working miracles, her boss must have expected her to be desensitized to the sound, but she was not.

The sound of the trigger as it moved backward was enough to cause her heart to leap into her throat, followed by the explosion that came as a bullet exited the chamber. Each painful second moved in slow motion, the bullet slicing its way through the air, a path set straight for the sweaty chest of the guy who had smiled at her moments before.

Ignoring the eyes that might be on her, she wrapped herself in invisibility, and let out her wings as she jumped into the air. Drawing attention to herself by disappearing in front of them was a huge risk, but as the piece of metal tore through the air, she had no other choice. If she was chastised later for her actions, so be it. She wasn’t going to let a bullet take someone, not on her watch.

She made contact with him, slamming hard into his chest and wrapping her arms around him. A searing pain spread across her shoulder, and she bit her lip as hard as possible to keep herself from making a sound as they fell to the ground. The last thing she needed, in addition to everything else that night, was for him to know she was there.

Fluttering her wings, she tried to ease their descent to the floor, but her left wing remained still. Something was wrong—very wrong.

About the author:
Randi has spent her entire life writing in one form or another. In fact, if she wasn't writing, she'd likely go completely and utterly insane. Her husband has learned to recognize when the voices are talking in her head and she needs some quality time with an empty Word file (the key to a successful marriage with a writer).

She lives with her husband, daughter, and four-legged children—all of which think they are people too.

A pop culture junkie, she has been known to have entire conversations in movie quotes and/or song lyrics.