attacked by those they protect - The Seeds of Dissolution by William C. Tracy

On a bright August day, the sun disappears.

The Dissolution is coming. 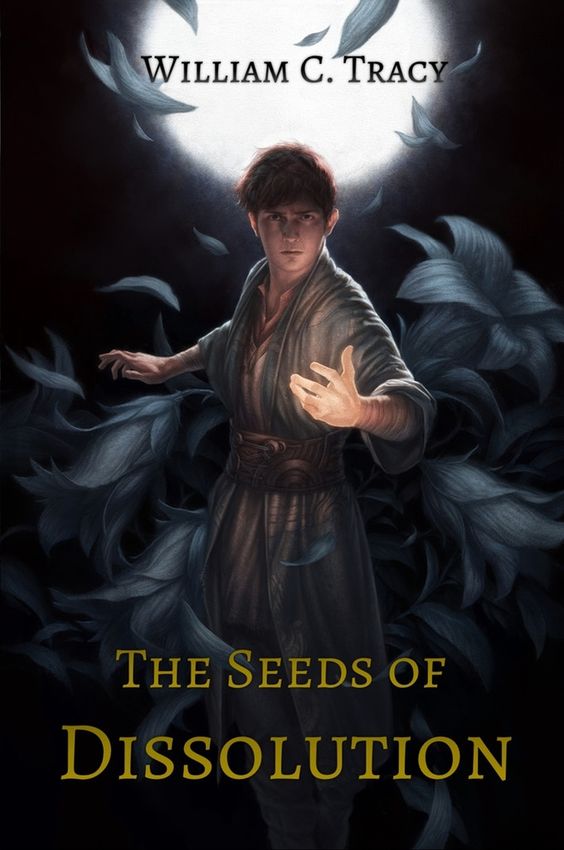 On a bright August day, the sun disappears.

Sam van Oen barely escapes freezing to death in his house, as his watch stops and fire ceases to burn. He is pulled into the Nether—a nexus between ten alien cultures—where he meets Rilan and Origon, two maji who can control the musical foundation of the universe.

While coping with anxiety attacks prompted by his new surroundings, Sam must learn to hear and change the Symphony, and thus reality, in order to discover what happened to his home.

But more freezing voids like the one that started his journey are appearing, and Sam’s chances of getting back are fading. The Assembly of Species is threatening to dissolve and the maji are being attacked by those they protect, while rumors grow of an ancient, shape-changing species of assassins, returning to wage war.
The Dissolution is coming.

I’m not yet published traditionally, though I have two self-published novellas and am running a Kickstarter campaign for a full novel in the same universe. Yet I am still submitting other stories to agents, and hope to be traditionally published as well. I’m not just waiting around for a publisher to “discover” me. Having books available by both methods means developing a brand in different ways. Traditionally published books can boost an author’s name further, whereas with self-publishing, there is the opportunity to write experimental stories, and subject matter or genres that are not considered “marketable.” Basically, one is being a small fish in a large pond, and the other is working to become a big fish in a small pond. I’m trying to have it both ways!

So how do you get there? Keep writing. I’ve heard, at least for self-published authors, that you need about five books out before they start to really get noticed. When my second novella came out, I actually sold more of my first novella than my second. Sounds contrary, but it makes sense in a strange way. This year, I’ve gone to several cons to hand sell my books, and done pretty well. I’ve also been a guest panelist at another con, talking about engineering, 3D printing, and martial arts. Now I’m trying the Kickstarter method. If I can make this first one successful, it will go a long way to growing my fan base, and letting me produce my next books by Kickstarter as well.

Marketing is really the hardest thing for an indie author. There are a lot of louder voices out there to compete against, and I’ve found that personal emails or messages generate the best support. However, those take a lot of effort, which reduces the time available for writing. I’ve tried ads on both Goodreads and Amazon, but only had a couple books sold that way. For the cost, none of the paid promotions I’ve tried have been worth the money in book sales, though the exposure to a larger crowd may be worth it in the long run. As an independent publisher, it’s important to try a lot of methods. Of course, if you land a deal with a publisher, they take care of a lot of the marketing work, but that’s why they also get a cut of the profit!

Finally, make sure you have a good story to tell. Work with a writing group to hone your craft until it’s the best it can be. Self-publishing a work doesn’t mean just throwing it out on the internet for everyone to see. Make the best work you can. Then do it again. And again.

Sam’s eyes snapped open and he jerked his neck up, wondering how much time he had lost. Ice crystals cracked around his mouth, nose, and eyelids. He tried to move, and fell to one side. He was slumped half in the fireplace, his aunt’s head on his leg. His fingers and toes ached as if tiny needles bored into them.

He reached down, but when his fingers brushed his aunt’s white hair, the strands broke with a tiny crack and fell, like little ringlets of glass. He jerked back, then touched her wrinkled forehead. It was colder than his hands, and he winced at the pain in his fingertips. The skin there was dark. He brushed ice from Aunt Martha’s skin. Sightless eyes stared back. No.

He should feel something, but his hands and his mind were numb. His aunt had put up with him and his fears for ten years. Should have obeyed instead of questioning. Sam’s eyelids dragged him down to sleep. It was pitch dark, save for a hint of light hidden in the pile of barely-burned wood in the fireplace, like a little campfire in a cave. He was drawn to it.

Take the heat. He reached out to the little light, hoping to delay the inevitable. His aunt’s body was a cold weight against him. He wouldn’t waste the extra time, however small, she had given him. He wanted to be far away from here, somewhere safe.

The tiny light winked out, and he heard a plunk of a bass string snapping in his head, shattering into a thousand harmonious notes. Warmth flowed into him, then away, leaving him colder than before. He gasped as a thick ring of light erupted on the hearth, barely as high as his kneeling form. Two colors intermixed and rotated around the edge of the ring, one color bright, the other shiny, like circlets of gold and silver. In the ring’s center was a pool of blackness.

Sam reached out to the glowing circle. His mind was sluggish, but he craved the glow. Instead of intersecting anything physical, his hand passed through the darkness, to someplace warm. That was where he needed to be. It was not cold there. The world was not dying there.

Another hand, warm and alive, caught his arm in a vice-like grip. Sam’s eyes widened, and he pulled back instinctively, but the thing on the other side of the circle was stronger. He grabbed for his aunt’s body, trying to bring her along. His numbed fingers slid across her frozen shawl, down one arm, clutching. His hand closed on nothing as he was pulled head-first through the hole in the air.

Pre-Order Links Coming soon Kickstarter
About the author:
William C. Tracy is a North Carolina native and a lifelong fan of science fiction and fantasy. He has two self-published novellas available: Tuning the Symphony, and Merchants and Maji, both set in his Dissolutionverse. The Kickstarter for the first novel, The Seeds of Dissolution, will run in August/September 2017.

He also has a masters in mechanical engineering, and has both designed and operated heavy construction machinery. He has trained in Wado-Ryu karate since 2003, and runs his own dojo in Raleigh. He is an avid video and board gamer, a reader, and of course, a writer. He and his wife also cosplay, and he has appeared as Tenzin, Jafar, and in several steampunk outfits.

In his spare time, he wrangles three cats and a bald guinea pig, and his wife wrangles him (not an easy task). They both enjoy putting their pets in cute little costumes and making them cosplay for the annual Christmas card.