an extraordinary portrait - Night In Jerusalem by Gaelle Lehrer Kennedy

“Gaelle Lehrer Kennedy’s Night in Jerusalem is an uncommonly poised and confidently crafted novel, one that echoes the work of Isaac Bashevis Singer in both its poetic simplicity and its consideration of the ways in which ancient law encounters the complexity of contemporary lives . . . a deeply moving love story unlike no other, one whose central characters are beguiling and unpredictable, yet always believable. This is a novel to savor—and to share.” — Russell Martin, author of Picasso’s Warand The Sorrow of Archaeology 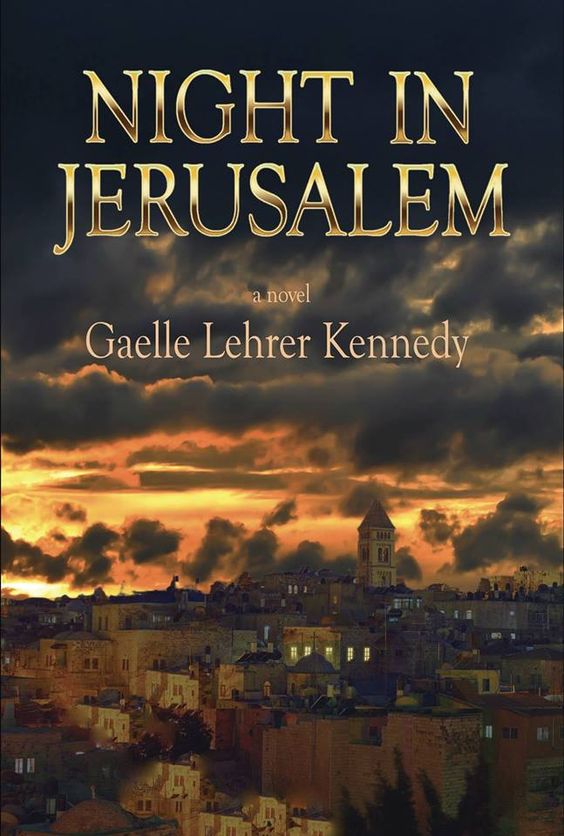 A bewitching love story that is also an extraordinary portrait of Jerusalem, its faith, spirituality, identity, and kaleidoscope of clashing beliefs, Night in Jerusalem is a novel of mystery, beauty, historical insight, and sexual passion.

David Bennett is invited to Jerusalem in 1967 by his cousin who, to the alarm of his aristocratic British family, has embraced Judaism. He introduces David to his mentor, Reb Eli, a revered sage in the orthodox community. Despite his resistance to religious teaching, David becomes enthralled by the rabbi’s wisdom and compassionate presence. When David discloses a sexual problem, Reb Eli unwittingly sets off a chain of events that transforms his life and the life of the mysterious prostitute, Tamar, who, in a reprise of an ancient biblical story, leads both men to an astonishing realization. As passions rise, the Six Day War erupts, reshaping the lives of everyone caught up in it.

Night In Jerusalem is my first novel. Previously, I have written screenplays. They are, of course, visually-oriented and provide limited opportunity for the writer to describe the characters’ states of mind - everything must be revealed on the screen. I was drawn to writing a novel because the canvas is so much larger –as big as you like - and the story does not have to fit a budget. The relationship with the reader is more intimate and complete.

I’ve never had a lot of interest in “meetings.” A friend of mine was hired to write a movie about Peter the Great. At a script meeting, he was told the studio thought he had made Peter “kind of unsympathetic.” “Too autocratic, is that what you’re saying?” “Exactly!” “Oh, so you want more of a czar-next-door feeling from him?” “Yes!” You get the drift. One of the things that drew me to writing a novel is that I would not have to go to any more script meetings

Stories can haunt me for years. The love story in Night In Jerusalem came to me on a movie set in Israel. It was a blazingly hot day and we were dressed as lightly as the dress code of the location permitted - long sleeves, long pants, long skirts. One of the crew members opened his shirt, revealing his muscled chest. An orthodox woman in long black clothes and a wig kept coming out on her balcony to look at us. Every ten minutes, she would reappear. I sensed how strongly she yearned for contact. The gap between us could have been crossed in a few paces, yet we were centuries apart. I imagined what it would be like to be her, what courage it would take for her to break free, how she might do it. Decades later, I wrote the story.

I studied creative writing at Columbia and appreciate the virtuosity and lyricism of many writers, but I love novels that are told simply, where the writer is unobtrusive and the characters and plot say it all - stories that are so clear and transparent you can see right into the souls of the characters. That’s what I strive for. Once I got clear that this is how I wanted to write a novel, I haven’t looked back.

David lay awake thinking about Anat. He was intimidated by her sexuality, but also fascinated by her free spirit and daunting intelligence. He had never met anyone like her. He wondered if Jonathan and the others knew she preferred women lovers, and why she had confided in him. He became anxious, thinking perhaps she sensed he had sexual issues and was someone she could easily manipulate.

Earlier, out on the roof, he had asked her why she preferred women. She had answered simply, “For the same reasons you do,” then adding, “I find women more interesting intellectually, as well as sexually.”

Her directness was equal parts frightening and exciting. He wanted to know her better. Perhaps, with her, he could get over his sexual problem. The truth was, he desired her as much as he found her intimidating.

About the author:
Gaelle Lehrer Kennedy worked as an actress and writer in film and television in the United States and Israel. Night in Jerusalem is her debut novel, which she has adapted to film. She lives in Ojai California with her husband and daughter.

She writes, “I lived in Israel in the 1960s, a naive twenty-year-old, hoping to find myself and my place in the world. The possibility of war was remote to me. I imagined the tensions in the region would somehow be resolved peacefully. Then, the Six Day War erupted and I experienced it firsthand in Jerusalem.

I have drawn Night in Jerusalem from my experiences during that time. The historical events portrayed in the novel are accurate. The characters are based on people I knew in the city. Like me, they were struggling to make sense of their lives, responding to inherited challenges they could not escape that shaped their destiny in ways they and the entire Middle East could not have imagined.

I have always been intrigued by the miraculous. How and where the soul’s journey leads and how it reveals its destiny. How two people who are destined, even under the threat of war and extinction, can find one another.

Israel’s Six Day War is not a fiction; neither was the miracle of its victory. What better time to discover love through intrigue, passion, and the miraculous.

Writing this story was in part reliving my history in Israel, in part a mystical adventure. I am grateful that so many who have read Night In Jerusalem have experienced this as well.”