"hope with every story" - Black and White by Ben Burgess Jr

"This story tackles the heart wrenching truth of racism in the modern world. Ben Burgess exposes the hurtful truths, that people face everyday, through the stories of two young attorneys. [...]
This story is deep and at times disturbing, but it is a must read. It's truth at its rawest form." J.Kahele, Goodreads When the prestigious law firm of Wayne, Rothstein, and Lincoln catches two major cases—a rape case where a White NBA star allegedly raped a Black stripper, and a murder case where a Black rapper allegedly killed a gay couple and two policemen—Bill O'Neil and Ben Turner are tasked to handle these racially charged litigations.

The cases hit emotional chords with the two lawyers and force them to reckon with their interracial relationships and families. Will the racial tension of their cases destroy them or make them stronger?

1. Looking through your Goodreads books list, I saw that your stories have serious themes. What is your preferred ending for your stories and why?
I like to write about realistic topics that everyone can relate to. I feel there are issues that some writers don’t want to tackle, but those topics would make great stories. For example, When I asked a majority of women if it’s possible for a woman to raise a boy to become a man, 99% of the 30 women I asked said “Absolutely.” When I asked if it were possible for a man to raise a girl to be a woman, 100% of the 30 women said: “Absolutely not.” I felt that would be a good premise for a story. I felt there weren’t many books that depicted Father’s in a positive light and I have never seen a book with an African American Father raising a Biracial child in a book, so I decided to write “Daddy’s Girl.”

With my latest novel “Black and White”, I want this book to change the world. I wanted people to see the ugliness that racism causes in the world, but to also see how beautiful things can be once we put aside racial differences and just accept people for who they are.

In all of my novels I try to help broaden the reader’s perspective, the same way researching the topics have broadened mine. I don’t give my novels the cookie cutter “happily ever after” endings, but I do try to give hope with every story. Life isn’t always “Happily ever after”, but hope is an important and powerful thing.

2. Is racism a two- way street? What is your approach to this aspect of the social phenomenon in your books?
In today’s world, I feel racism is a two-way street. Sometimes the anger and frustration from negative past experience causes people to lash out to everyone in that race. In “Black and White” I try to show examples of this with my characters Ben and Bill. Sometimes we assume and stereotype people from different races and our own biases show that we all need to change and look at people by a case by case basis rather than generalizing everyone in that race as the same. I use my books like mirrors to show people some of the things they might not see, but need to see.

3. How did your writing style change in Black &White since 2013 when you had your first book published?
When I wrote my first novel, I’ll admit I tried to be too much like my favorite author Eric Jerome Dickey. While writing my second novel “Wounded,” I feel like I found my own unique voice. I stopped trying to be like my favorite author and wrote my stories the way I wanted to. As I’ve continued to write, I’ve tried to improve my description techniques and strengthen dialogues between characters. I try to tug on my reader’s heart strings so they can have an emotional connection with the characters. I believe if a reader is emotionally invested in a story, they will enjoy the book even more, so that has been my goal since 2013 and I feel I’ve gotten better as I’ve continued to write.

4. What are the features of the thriller readers in our days and how these characteristics influence your writing? What is your target readers?
My target readers are everyone. While my books might have African American protagonists, my stories deal with topics that people from every race can relate to. My fan base is diverse and I love that. I like seeing my books bring people together from every background and it’s my unique way of bringing change to the world. Often times, some reviewers are hesitant to read my books because they feel like they’re not going to connect with my characters, but once they give the books a chance, they see that “Urban Fiction” isn’t just about Drug Dealers, Baby Mama Drama, thugs, gangs, and killers. I feel that readers can see themselves in my characters or at least see people they know in love in them. I want everyone to be my target audience.

5. What motivates you and please you more: critics’ appreciations or readers’ appraisals? Why?
Critics appreciation is important because they influence readers, but reader’s appraisal is the most important. I’ve won 21 awards and have been well-received by most critics, but getting emails from fans explaining how my book really touched them and seeing all the positive reviews means everything to me. It shows me that what I’m doing is making a difference in the world. 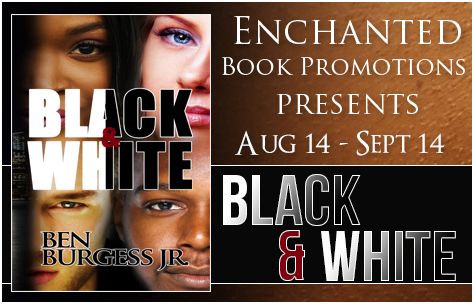 About the author:
Ben Burgess Jr. is the author of the award-winning novels "Monster," "Wounded," "Love and Happiness," " Daddy's Girl," and the new novel "Black and White." He is an active performer of spoken word poetry. Ben Burgess Jr uses his love of writing to inspire and influence youths to strive for what they believe in and to never give up on their dreams. His novels "Monster" and "Wounded" are currently used in schools on the lower east side of Manhattan. Ben Burgess has a BA degree in Business Management and an MA degree in Educational Leadership. He is the proud father of his daughters Jaelynn and Jaclyn and he is active in trying to improve urban neighborhoods and communities.