"Stimulating and captivating, new to me author, Ms. Gardner charms me with this paranormal romance. How have I not read this author before? This tale is magical and weaves a complex story of a girl with a past shrouded in pain and mystery." - Book Addict, Goodreads 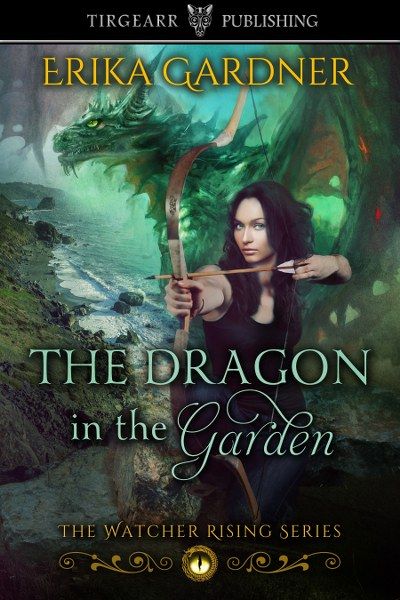 There is magic beneath the mundane and in The Dragon in the Garden, Siobhan Orsini witnesses it all. No lie can fool her, no glamour or illusion can cloud her Sight. She sees through them all and wishes she could close her eyes.

Returning to face her past, Siobhan inherits her grandparents’ house in California’s wine country. She encounters a talking dragon, a hot fallen angel, a demon lord, a Valkyrie, and, oh yes, her ex-boyfriend. And that is just in the first twenty-four hours.

It’s time to find out why she has this power.

Siobhan seeks out the Oracle and learns that only her Sight can help mankind navigate the travails of an ancient war. Our world is the prize in a battle between the dragons, who would defend us, and Lucifer’s fallen angels, who seek to take the Earth for themselves.

Using her gift, she will have to make a choice that will decide humanity’s future.

Hmm, five things you’d never guess about me? Tougher than one might think. Most of that sort of thing I divulge in my bio: short, loud, lover of heavy metal and spicy food. On top of that the assignment specifically requests that said items be “fun, interesting, edifying or even embarrassing.”

Okay, let’s give this dog and pony show a shot. I’ll start with DM’ing. Come on, fantasy author? Being a Dungeon Master isn’t too hard to believe, right? Contrary to what The Big Bang Theory would have America believe, women do play Dungeons and Dragons. My favorite character is a chaotic evil half-elf thief-assassin. She’s a kick-ass bunch of fun to play- great at acrobatics. So, yes, I am a Dungeon Master. Or, I should say, I used to be. Nowadays I’m busier than a one-legged gal at a butt kicking contest. D & D is a massive time suckage- super fun though. You should try it. My son is the DM now.

Thing Two? (So Suessian) I have an extreme addiction to traditional San Francisco sour dough. YUM! Forget counting carbs- life is short, eat bread. Real sour dough is one of about a thousand reasons why I’ll never leave the Bay Area and Northern California. Although, I do love to travel.

Third thing… okay, let’s get with the embarrassment. As you might see if you’ve ever read my bio, I am nuts for heavy metal. Iron Maiden, Sabbath, Priest, Dio, Black Label Society, Nightwish, Scorpions, Delain, WASP, Queensryche, the list goes on and on. What was I saying? Oh, right. *hangs head in shame* A few years ago I visited a dear friend in Los Angeles. After deplaning I walk through LAX and I run into the one, the only, Vinnie Appice. Awesome drummer, just massive talent. Love him. (Run, Google him, go. I’ll wait- I have wine to drink. And while you’re at it see if someone can explain why he and his big brother Carmen pronounce their last names differently. Never understood that.) So, although I’m shaking I’m so nervous, I walk over and say (in a fit of sheer brilliance), “You’re Vinnie Appice.” He couldn’t have been nicer. Side note, I did not look very metal that day, cute turquoise plaid shorts, matching blouse and jewelry- NOT metal. He’s super gracious telling me about the gig they’re going to play, etc. I don’t want to keep him, again soooooo nervous, so I wrap things up saying how much I loved him throughout his career- Dio, ACDC, UFO, etc. Now, if you did Google Vinnie you’ll know that the resume I just listed is NOT Appice’s. It’s that of another drummer who also played with Ronnie James Dio, Simon Wright. I was just so rattled. I could see on his face that I screwed up. Again, the man was a class act- could not have been sweeter. That made it worse. I swore a lot under my breath walking away that day.

Vinnie, Mr. Appice, if you ever read this I swear I really do know who you are. I was just having a freak-out moment. *hangs head again*

Moving on with relief to number four. I coach track and cross country for a local middle school under my married name. Other than reading and writing, running and coaching are my biggest sources of joy. It’s a bit like herding cats, but their sheer exuberance and joy is life affirming. I love my adorable turkeys as I call them.

Last thing one might not guess about me? I always wanted to be a marine biologist when I grew up. Never wanted to be married (men are decorative but you don’t keep one), never wanted kids, and planned on being a single career woman. In that alternate life, I think I still would have written - I can’t help that. I went to UC Davis, got my degree in Biological Sciences, and thought I’d go on to other things. Instead, fate stepped in and brought me the love of my life, three wonderful kids, and a career as a fantasy writer. For the record, I am so okay with how events turned out.

Thanks for letting me stop by- super fun!

About the author:
Erika is a sixth generation San Franciscan of Irish descent. She attended the University of California at Davis and completed degrees in Medieval History and Biological Sciences. A lifelong lover of books and a scribbler of many tales from a young age (her first story was completed at age five) she turned to writing full-time in 2011.

On a personal level she loves spicy food, twilight, dark chocolate (with sea salt-yum!) and nickel slots at Vegas. Erika lives for time with friends, a nice glass of red wine, “Buffy the Vampire Slayer” & “Doctor Who” and good conversation. Her favorite things to do are running, cooking, reading, needlework, gardening… and of course, writing. Erika's music of choice is heavy metal. To pick her out in a lineup you should know that she is very short, fairly loud, and has dark eyebrows. The rest, as her hero Anne McCaffrey once said in her bio, “is subject to change without notice”.

Erika resides in Northern California with her incredibly hot husband, their three amazing kids, and their chocolate Labrador named Selkie. To reach Erika regarding her books, wine recommendations, or to debate which Iron Maiden album is the best (clearly, it’s Brave New World)

I'd love to have a dragon in my garden. It would keep the moles out.

I'm hoping the hot angel switches sides. I love books and movies that have dragons in them.

I love anything to do with dragons. The book sounds great and the cover is gorgeous.