There is no escape... Servant of Salem by Breanna Hayse

"Once I picked up Servant of Salem there was no way I could put it down. The past and the future blended in so well together and before I knew it I found myself lost in the past with our wonderful characters." Nancy, Goodreads 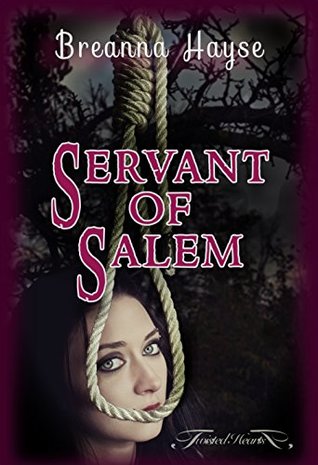 “The intricate patterns woven into the tapestries of time are not always to be understood, but to be accepted as just being. The truth serves to illuminate the enlightened and destroy the deeds of the wicked, and know always that there are those who will silence it. My hope for mankind is to learn from the past to better the future and that people become wise to the power of their lies, and not be fooled as those who were fooled before…" ~ The Master of Salem; Robert Calef, PhD. Salem, MA 2015

Destiny Calef has two great passions in her life: her handsome and incredibly sexy professor husband, Robert, and serving the truth of history - particularly that of the world-renowned, infamous witch trials of Salem, Massachusetts.

Granted as part of their research stipend, the couple moves into the old Downing farm, the former residence of the accused witch, John Proctor. It is there where Destiny's dreams become nightmares, and she is plagued by a recurring vision that occurs at the exact same time of 3:33 a.m. There is no escape from the images that haunt her mind, and no answers with regards to their purpose. Her only hope lies in finding a clue hidden in Robert's secret library that is locked in the basement's vault. But Robert refuses to give her the key...

Curiosity and desperation get the better of her and Destiny defies Robert's orders to steer clear of his library. In that room, she discovers the truth about her husband's troubled past and his incredible secret… one which will not only turn her life upside down, but will lead to her standing face-to-face with one of history's most manipulative and notorious accusers of witchcraft, the Reverend Samuel Parris himself. This was a man who was known to get what he wanted, no matter the cost, and the portrait painted by history was nothing compared to his true evil and selfish nature.

Time has brought Destiny to 17th century Salem for a reason, but there are rules regarding changing the course of events, and severe consequences when these rules are broken. Destiny soon discovers that the kinky role-play games she and Robert enjoy enacting in the bedroom are child's play compared to the harsh deliverance of penance in colonial life. She also learns that things written in the history books are not always the truth, and makes it her mission to not only save innocent lives from the clutches of Samuel Parris, but to let everyone in the future know that what is written is not always the truth.

Author’s Note:
I started this piece as a historian, following the treasure map of documents and accountings of the infamous 1692 Witch Trials of Salem. What I discovered between the pages of history were the specters of truth lost in the kaleidoscope of time and concealed in the shadows of those who hungered for power and property. This is not about ghosts, witches or the paranormal as I had originally supposed, given my fascination of the subject matter, rather a love story that stood the test of time. A man and woman of flesh and blood, and how their trust, love and sacrifice broke the chains of evil. Now revealed, I offer that truth to you and pray that your eyes are open to that which is, not that which is desired. ~ Servant of Salem

Based on actual facts and historical data, #1 Best-Selling Multi-Genre author Breanna Hayse delivers a compelling tale of love, fear, lust, lies, loyalty and the reality of corporal punishment like she's never done before in this: Servant of Salem.

In 2004, my husband, John, and I joined forces to work with both submissives and dominants- teaching, training, listening and loving. Our goal was to take the mystery and fear out of the lifestyle and mentor people in safe, consensual and healthy relationships.

My first book, The Game Plan, was published in 2012 and opened the door to the now-booming world of Age-Play literature. Since that time, I've devoted my 'spare' time to writing, researching, community involvement, and private and group pro bono counseling in deviant behavior, alternative lifestyle, and addiction recovery.

I live with my husband, musician, and fellow-author, John Hayse, and two border collies in southern California. We practice a 24/7 D&S relationship with speckles of AP (and many trips to Build-A-Bear), and happily spend every moment together that we can. My hobbies include my puppies, hiding my vanilla salt-water taffy where John can't find it, exotic art, collecting inspirational trinkets, and developing my own paddle line. You can also see me as a featured author/instructor in professional conference settings and as a Sexpert for kinkyliterature.com.

Since I have Salem witch ancestry I always read any book that treats the topic. This one sounds interesting. Thanks for sharing.

I think it looks very interesting. We love Salem and try to make the trip up at least once a year!

Salem Witches has always appealed to me.. I can't wait to read this!!

This book sounds very interesting. I've always been fascinated by stories of witchcraft and Salem. The cover is quite spooky.

What a great cover and I would love to read your book.

The cover is kinda scary-- makes me wonder what's going on?

It is a very interesting book cover and captures my attention!

The cover really draws me in to wanting to pick up this book!