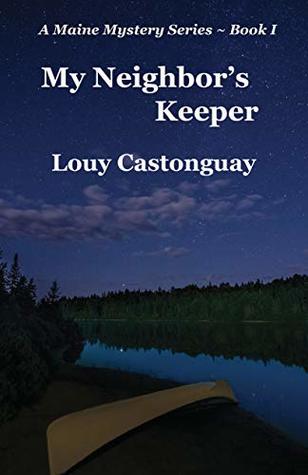 "My Neighbor’s Keeper," the first in a series, is centered on retired paramedic Mrs. Charlotte Henson, aka Charlie or Mrs. H. She’s sixty years old and a widow. Her husband, a former police officer, was run down by a drunk driver three years before. Charlie befriends shy six-year-old Bert, from next door.

One evening, Bert comes to her door, dirty, tattered and crying. His mother won’t wake up and his two younger sisters, he says, are hungry. Charlie runs to the rescue, and ends up embroiled in a murder. Bert’s mother is crumpled at the foot of the cellar stairs. When Charlie realizes she’s under surveillance, she sneaks out the back door and down to the river, where her canoe is kept. She gets out on the river, at night, in a rainstorm, goes upriver and travels to a cabin hidden in the woods in order to buy time to solve the crime.

Along her journey, she makes friends, and also gets help from her husband’s niece, Louise. 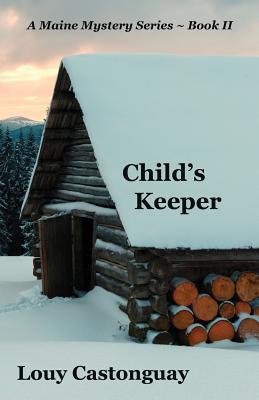 This Maine mystery tale, "Child’s Keeper," is the second book in the Charlie Henson series. Charlotte, aka Charlie, a retired paramedic, embroils herself in international intrigue when she attempts to help a friend.

She discovers that Shirley, the great-granddaughter of her friend Susie, has gone missing, along with her two young daughters. She soon learns Shirley has fled to Canada and travels there to find out what is going on. The oldest daughter, Shawna, is soon in the hands of Canadian authorities, caught in a sinister plot to find Shirley. Charlie locates the daughter, steals a snowmobile, and crosses back into Maine. The situation becomes very complicated when she herself is kidnapped by the very criminals interested in finding Shirley. When she finds herself back in Canada, on the snowmobile trail again, she is able to effect an escape for herself and Shawna.

Will help arrive in time, or will the bad guys find her first? In this journey, she gets help from unexpected places and from old friend Ronny Curtis.

"Tell us." Ronny spoke words I wasn't able to choke out.

"It's not good." Dick looked down at his toes and scuffled rocks as he spoke. "Chief Manning is campaigning with this. He's vowing you won't escape justice. He's got you tried and convicted. He uses people's fears about a murderer on the loose. He's promising that he's going to put you away for the maximum time, personally make sure you don't just land in some soft, half-way mental facility that'll put you back on the street in six months to do it again to some other poor, unfortunate mother." He paused to breathe, still scuffing rocks. He raised his eyes and looked downriver. "He's stirred people up into a furor over this, whipping up feelings against you." Anger sculpted his words. "He totally ignores the plausibility of another criminal." He still wasn't looking at me.

I could feel his avoidance like a physical back-turning. "Dick, what is the matter?"

I heard Ronny draw a ragged breath, as he held the canoe against the shoreline.

"I just...." I saw indecision leave and his shoulders come up. His very blue eyes met mine. "I've been in law enforcement a long time. I've learned a lot on the front lines. Things aren't always the way they seem, or the way they should be. I came up here because Louise asked me to come and help you. You need to know I won't cross the line. The evidence is overwhelming against you. I'll ask just once. I need to ask because I don't know you." He looked professional, despite his baggy jeans, tee-shirt and flannel over shirt. He didn't look away as he asked. "Mrs. Henson, did you have any part in the death of your neighbor?"

I heard Ronny chuckle softly behind me. I was afraid the weight of accusation was going to sink our canoe, or push me down through the bottom of it. I held onto the gunwales, dizzy, disoriented. This couldn't be happening. Someone must believe me. Did Louise?

I looked up and saw the youthfulness of the person questioning my verity and anger displaced the fear. I wanted to swing at the man behind me for chuckling. I started to turn but the upwelling of Ronny's laughter showed me the ridiculous side of the situation and washed away the anger. My voice was calm when I spoke. "Young man. Events occurred exactly as I told you. If you have no faith in me, then return to the city where you came from. I never asked you here. Louise brought you. If you have any doubts, we'll manage better without you."

About the author:
I am a double graduate from UMF. My first degree in 1989 was in Community Nutrition, with a minor in chemistry, the better to plot murders. My second degree, in 1994, was for the newly developed BFA in Creative Writing but had to be fluent in a foreign language. I'm Franco American, so aced that.

I have worked at various jobs throughout Central Maine, including shoe shops, egg plants, wool mills, office jobs, finally spending time as a volunteer driver for Community Concepts. Life experiences along the way have given much material for my books.

I am currently hard at work on the series, doing promotional activities and hope to have a web site up soon. I'm also running a blog, Keeper Series, to keep my reader's abreast of my progress. I hope to have the next volume out by April.

a Rafflecopter giveaway
Posted by CCAM at 2:46 PM

great cover. even the titles make me curious
sherry @ fundinmental