I had a great experience reading this. [...]
This book reminded me why I love this genre and how excited I get when I find a great new sci-fi series. 5 out of 5 stars! - Nora S.

So good that I couldn't put it down-- 'Fractured Prophecy' is the fourth book in the Prosperine series by P.J. Mcdermott and perhaps the best one yet.

Hickory Lace, the badass, tough-talking heroine and space commander from the first three books in the series, is back again and in this book, things get a little more personal for her. Still devastated by the loss of her mentor, a man who she called 'The Teacher,' Hickory is thrown for another loop when a life pod is discovered to have escaped from the Arc ship before it exploded. Hickory must investigate the pod with her fellow soldiers to discover the truth and what the future will hold for what's left of mankind.

This book does a great job of catching up the more casual reader right from the get-go. Everything you need to know about the world is laid out cleverly and with style, unlike some sci-fi series that tend to info dump all over you for the first five pages. I had a great experience reading this. I loved Hickory and her combination of level-headed commander versus her inner struggle as a woman who has recently lost someone that she cared very deeply for. I loved Jess and Gareth's characters and the way they complimented Hickory and helped her along on her journey.

The world building was fascinating and extensive. I love to sink my teeth into a great sci-fi book with a well written universe and this really fit the bill. McDermott's universe is so creative and well thought out. The basis in Christianity and religion was very interesting and not something I've ever seen in sci-fi before. This book reminded me why I love this genre and how excited I get when I find a great new sci-fi series. 5 out of 5 stars!

An alien messiah is missing, presumed dead. Will one woman’s interplanetary search for answers bring resurrection or betrayal?

Auriga, 2183. Empath Hickory Lace is desolated by the fiery death of the alien she once considered the son of God. But a tiny flicker of hope that he could still be alive brings her back to the Corps for a perilous mission behind Bikashi lines to recover the powerful sword of Connat. And although the Teacher’s self-sacrifice burns in her heart, the truth she uncovers on the enemy’s planet ignites a fierce new purpose.

A desperate sprint across an alien landscape unearths two different species kept in slavery by the Bikashi. Hickory decides she must liberate these suffering people and plans a daring rescue. But her assignment demands that she find the high-tech sword before the Bikashi can harness its power to enslave her home world.

Will Hickory use her abilities to save the innocent and thereby allow an alien warlord to conquer Earth, or will she leave the slaves to their fate?

Fractured Prophecy is the fourth book in the engrossing Prosperine YA science fiction series. If you like tenacious heroines and political intrigue with spiritual undertones, then you’ll love PJ McDermott’s epic story.

All good fiction writing includes some element of danger or uncertainty, whether physical or emotional. It matters not whether the book is categorized as literary fiction, thriller, suspense, crime, mystery, religious fiction, erotica, or romance. If there is no risk, there’s little to keep the reader involved in the story. The difference is in the degree, frequency, and type of confrontation involved. The danger inherent in a world invasion is on a different scale to a family argument (although some would disagree!)

At first glance, there doesn’t appear to be much to choose between action and adventure genres. The words “action" and "adventure" both imply the presence of physical danger or risk.
So, how do you recognize whether you’re reading action or adventure?

Not as easy as you’d imagine. The movie Die Hard is often held up as the epitome of action movies. Based on the book, Nothing Lasts Forever, by Roderick Thorp (released in 1979 and again in 2004 as an eBook.) The movie follows the novel closely, and the action scenes written by Thorpe are faithfully reproduced in the film. In Thorp’s book, the protagonist saves his grandchildren and many others who have been taken hostage by armed terrorists within an office building. There’s not much more to the storyline, but the action-oriented plot keeps the reader (or viewer) on the edge of their seats. This is typical of action fiction where the story is usually linear, commonly about the hero saving the day.

In an action novel, this danger is represented by an antagonist who is intent on stopping the hero from achieving his or her goal (usually via deadly force: guns, explosives, and the like.) Often the plot involves a series of vignettes that focus on one moment and gives the reader a sharp impression about that character. In writing, these vignettes comprise short, descriptive passages that are more about evoking meaning through imagery than character development. Action books are often very heavy on the plot with danger pulling the story forward, leaving readers on the edge of their seat desperate to know what happens next. Elements of risk and surprise are key factors in action stories.

As a guide, if there is a villain or a rival chasing, racing, fighting with, or deliberately placing the hero in danger, "action" seems a good description. In fact, books described predominantly as action always feature physical plot elements such as fights, shootouts, explosions, stunts, and vehicular chases. In these books, continuous conflict is the key to keeping the reader involved.

In adventure novels, the danger doesn’t necessarily manifest itself in the shape of a villain. There are memorable adventure books where there is no obvious villain. For example, the entire physical conflict in Andy Weir’s The Martian is with the environment (the planet Mars provides the danger.) However, it’s fair to say most fiction books need to have more than one focus. Otherwise, they run the risk of being dull and boring.  Hence, the danger in an adventure will likely arise from a variety of sources. However, the critical element in an adventure is there must be a journey through a strange land, often in pursuit of a higher quest.

Usually, the hero is set against one or more antagonists while having to navigate an unfamiliar and dangerous environment. The action, though, is secondary to the hero’s main objective, the search for and attainment of the “grail.” Lord of the Rings is a great example of an adventure story. Yes, there are battles to be fought, but the story revolves around the need to take the one ring to mount doom. If that quest wasn’t there, if the journey wasn’t there, what remains is a series of actions that serve no real purpose.

In an adventure, the hero begins a journey from a familiar environment, travels to a new and different world, and attains his goal. This is different from writing classified as “action” where the setting can be very familiar to the reader (and the protagonist.)

Adventure books always involve a journey into the unknown (physical or metaphorical) and include the pursuit of a hazardous quest. Such books often feature exotic locales and include challenges of the mind as much or even more than physical ones. A journey or quest is essential to the genre because, without it, there is no adventure. However, there is another important reason for such a challenge in adventure fiction, one that is not at all necessary in action-only writing. What the hero encounters often changes him/her, whether it corrects a flaw, matures their personality, or gives them a greater understanding of themselves. By the end of Lord of the Rings, each of the Hobbits has undergone massive growth in their characters.

Traditionally, protagonists in both action and adventure stories have been male. In modern times, females are more and more taking on the role of the hero. Katniss Everdeen (The Hunger Games) Lisbeth Salander (The Girl with the Dragon Tattoo) Beatrix Kiddo (Kill Bill) are all examples of female protagonists who aren’t perfect. Especially in an adventure book, it’s the protagonist’s flaws that serve to make them seem more human and their struggles to overcome these, which helps to move the story forward.

My latest novel, Fractured Prophecy is a modern adventure book with a flawed heroine. Hickory Lace and her partners in the Alien Corps are involved in many action scenes as they journey across a new and exotic environment.  Hickory also makes important discoveries and solves difficult puzzles, which in the end leads to a transformation in how she sees the world and her place in it.
So, does it really matter if a book is action or adventure?

Honestly? I enjoy reading both! But as a writer, it’s important to know what makes your genre zing and what your readers love and expect from a book. That’s the way to turn readers into lifelong fans. 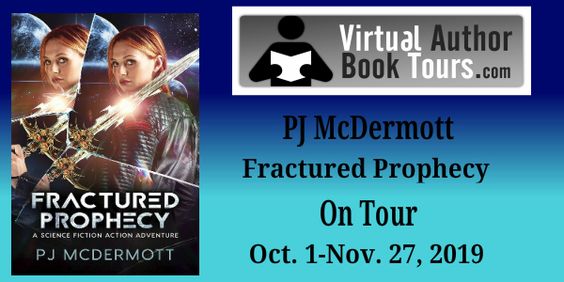 About the author:
Born in Scotland, PJ McDermott moved to Australia 50 years ago, and now lives in the tropics in the North Queensland town of Trinity Beach. He started writing after he retired from the corporate treadmill and published his first novel in 2015— Small Fish Big Fish, a coming of age thriller set during the sixties. But he has always read and loved adventure and science fiction books. PJ has fond early memories of hiding under the blankets in his bed, torch in hand, reading 20,000 Leagues Under the Sea and Gulliver’s Travels. In his teenage years, like many other kids, he had lots of unanswered questions about God and the purpose of life (is there one?). Even today, similar questions remain unanswered in his mind, providing him with a springboard for his book series, ‘Prosperine’.

Thanks so much for hosting!

Thanks, Albert, for a wonderful review. So pleased you enjoyed it. I'd be happy to answer any questions your readers might have on the book or the guest post.

@Nora S. - your review should convince many to read the book

@PJ McDermott - happy to present your book/series.
I really liked your article which is both informative and entertaining. If the GP is proof of your writing, most probably I'll be your next lifelong fan...