Launch - Note from the Author
...Mara is one of my favorite characters in Tales of Faeraven. Her keen mind and strength of will serve her in good stead. She doesn’t always make the best choices but eventually learns from her mistakes. In that respect, I’d like to take a leaf from her book.

Mara didn't know her parents were living a lie.

After learning a secret that causes Mara to question her heritage, she runs to Torindan, the High Hold of Faeraven, to seek the truth. What the innkeeper’s daughter doesn't know is that Rand, the mysterious tracker she’s hired to guide her through the wilderness, has been sent on an errand that puts her life at risk.

Helping Mara furthers Rand's purposes, but he doesn't count on his emotions interfering.

With Faeraven on the brink of war, Rand is faced with a life-altering choice, Mara is torn between escape and learning the truth, and the future hangs in the balance.

Will Mara be heir to the Faeraven throne? Can Rand escape the terrors of the dungeon?

As Torindan and Pilaer prepare for battle, anything can happen.

"The third book in the Tales of Faeraven is just as surprising as the first two. Just when you think things are okay the story pulls you left and right. Janalyn Voigt has such a way of crafting a fantasy world while weaving scripture into the story and making it relatable as always. . . . This book is centered around Mara and the secret of her life. . . . Overall, great addition to the series! Excited for DawnKing which is book four." Daughter of Increase - Review

"...I quickly found I wanted to know more and couldn’t wait find out what happens! I was pleased with how this one turned out, and enjoyed seeing some of the secrets and things that weren’t covered but were hinted at, or missing in the first two books." Adventures Thru Wonderland - Review

"SoJourner starts with a new character, Mara, whom I think might just be one of my favorites so far. Her spunk and courage are endearing, as well as her deep, forgiving nature. Also new to the scene is Rand, the son of an enemy. His character really adds depth and a new dimension to the story. . . . Voigt once again delivers a novel of beautiful descriptions and a unique world all her own. While I felt the novel could have been fleshed out just a little more, the overall pace and plot were done excellently." Paper Ink & Lizard - Review

"...this remains a well written, inventive, entertaining and complex read with dynamic unforgettable characters and an underlying current of faith. I'm interested to see where things are going next. Janalyn Voigt has written a great addition to the series and I recommend for anyone who has enjoyed the books!" jypsylynn - Review

"Sojourner is the third novel in the speculative/fantasy series The Tales of Faeraven. I think that the world-building in this series is second to none, with the culture and customs of this fictional land being solid and credible. I do like it that some of the characters and evens (at least in the early books) are based on actual Medieval European History. . . . So what did I enjoy about this book? Most of it really. I liked how alongside the political intrigue with a growing threat from an enemy army threatening the heroes, there was a hint of romance between Mara and the mysterious Rand." Romances of the Cross - Review

"This was my favorite book of the series so far. . . . I loved the interaction of the characters and the weaving in of the past, present, and future that is to come. This is story of finding love, hope, friendship, and honor in a time of war." Bookworm Lisa - Review

"Sojourner is the third book in the Faeraven series, and is my third read from Janalyn Voigt. These novels seem like they could be read as standalones, but the books are so good, I recommend checking them all out. . . . Overall, Sojourner is a fantastic read with beautiful descriptions and compelling characters. Recommended for sure!" Jessica Belmont - Review

"Sojourner ends with a little more of a cliffhanger than the first two books, but my guess is Voigt is gearing readers up for something epic in the next installment. As this series continues, I become more invested in these characters and Voigt’s story world. And I really want Kai and Shae to get their HEA!" Remembrancy - Review

"I was happy to be back in this world. I enjoyed the continuation of this story and I think this one just might be my favorite as many loose ends of the previous story are tied up. The story arc is one that is keeping me glued to the pages and looking forward to the next in the series." Pause for Tales - Review

"I eagerly anticipated reading SoJourner having recently enjoyed DawnSinger and WayFarer. Janalyn Voigt did not disappoint. . . . I look forward to reading book 4 in the Tales of Faeraven series. I highly recommend reading these books in order in order to fully understand the plot." Library Lady's Kid Lit - Review

"I have to say that I've been quite enjoying Janalyn Voigt's Tales Of Faeraven series and SoJourner was no exception. Readers are once again transported right into the story by author Janalyn Voigt's vivid word-painting of her magical fantasy realm. So, if you are into epic journeys, sword fights, hidden identities, and flying horses, you really should check into this book and series..." Tell Tale Book Reviews - Review

We hope you enjoyed the tour! If you missed any of the stops
you'll find snippets, as well as the link to each full post, below:
TOUR SCHEDULE
Goodreads **Amazon** Barnes&Noble **Pelican
Don't forget to enter the giveaway at the end of this post... 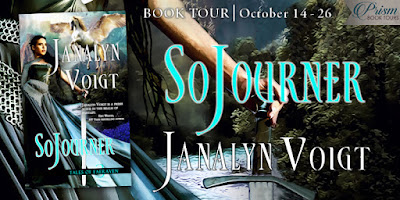 About the author:
Janalyn Voigt is a writer and professional speaker with a photography habit and a passion for travel. Her unique blend of adventure, romance, suspense, and fantasy creates worlds of beauty and danger for readers. Tales of Faeraven, her epic fantasy series beginning with DawnSinger, carries readers into a land only imagined in dreams. She is represented by Sarah Joy Freese of Wordserve Literary.

Tour Giveaway
One winner will receive a Tales of Faeraven bookmark and choice of ONE of the following items (US only):
Sapphire Headpiece:
Handmade Leather Journal:
$20 Amazon Gift Card
Ends October 30th, 2019
a Rafflecopter giveaway
Posted by CCAM at 6:54 AM