Special Offer and Giveaway: The Art of Love: Origins of Sinner's Grove by A.B. Michaels 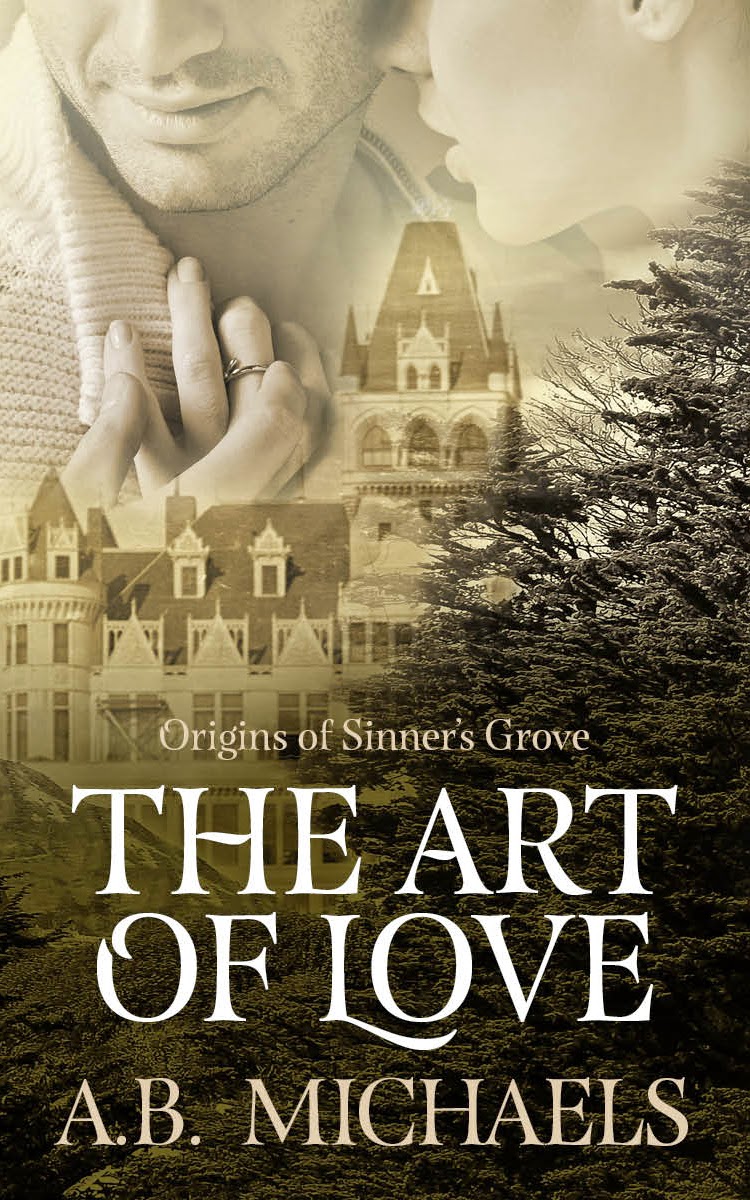 With nothing but a strong back and a barrel full of ambition, August Wolff finds wealth beyond measure in the frozen goldfields of the Klondike. Success, however, comes at an unbearably high price. Now Gus walks alone, and all the money in the world can’t buy him what he needs.

In the late 1800’s, when women are largely seen and not heard, Amelia Starling longs for a life limited only by her imagination. Blessed with abundant artistic talent and an even bigger heart, she moves to the boom town of San Francisco, hoping to make her mark and living with the pain of a sacrifice no woman should have to make.

Two wounded yet defiant individuals meet at the dawn of a new century, discovering a passion eclipsing all they’d ever known. Longing to build a life together, can they overcome the dictates of a cruel and spiteful society?…The Art of Love is the prequel to the just-released contemporary romantic suspense novel, Sinner’s Grove. Sinner's Grove is available today and tomorrow only for 99 cents on Amazon. 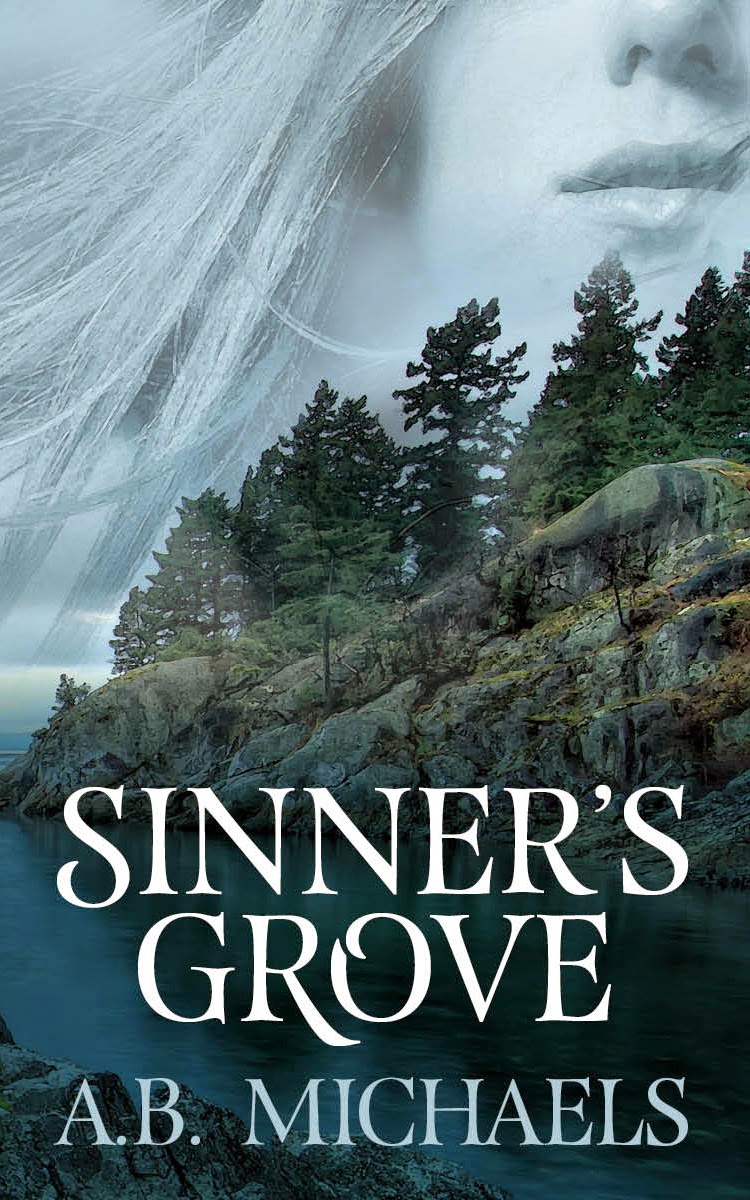 A startling discovery when she was 14 left San Francisco artist Jenna Bergstrom estranged from her family; unforeseen tragedy only sharpened her loneliness. But now her ailing grandfather needs her expertise to re-open the family’s once-famous artists’ retreat on the California coast. The problem? She’ll have to face architect Brit Maguire, the ex-love of her life.

Seven years ago, Brit spent a magical time with the girl of his dreams, only to have her disappear from his life completely. Now she’s back, helping with the biggest architectural renovation of his career. No matter how deep his feelings still run, Brit can’t afford the distraction of Jenna Bergstrom, because something is going terribly wrong with the project at Sinner’s Grove.

As Jenna and Brit struggle to keep their passion in check, unseen enemies close in, bent on destroying more than just her grandfather’s dream. Through the prism of ever-increasing danger, Jenna finally discovers what true family—and true love—is all about. But will it be too late?

Dressed in formal attire, Gus arrived an hour after the party had begun. No sense in milling around too long and having people think he actually wanted to be there. He talked to a few people he recognized and lingered at the back of the ballroom, watching the hoopla unfold. Turns out he’d made it to the Firestones’ Pacific Heights mansion just in time.

“And now, may we present The Family, a painting by Amelia Starling.” Edward and Josephine, Will’s parents, jointly pulled a silk cord and the curtain rose, so to speak, on a huge canvas.

The guests erupted in a collective “Oh!” The painting was incredible, unlike any family portrait Gus had ever seen. He started to move through the crowd to see it better, but froze at what, or rather who, he saw next.

“And we are happy to introduce the creator of this brilliant work, Miss Amelia Starling.”

The woman who stepped forward, smiling at the crowd, was none other than Ruthie … but not the sweet young girl Gus had met several weeks before. No. This woman was beyond beautiful, her eyes with some kind of color on them that made them seem even larger and more exotic than before, her gorgeous dark hair swept up with some kind of shiny netting woven through it, and glittery diamonds hanging from her delicate ears. And her body. Lord have mercy. Her body was encased in a long, deep-colored dress, a kind of red, he thought, that displayed her breasts and every other curve with elegance and grace. She was magnificent.

He strode through the crowd but stopped so that she could see him as she talked to one admirer after another. At one point she saw him and her eyes grew wide. He continued to stare at her and she didn’t look away. The man she was talking to—a geezer with money, no doubt—finally had to touch her arm to get her attention. Good.

He waited, patiently, until the crowed had thinned and the Firestones had announced the buffet was open. Then he made his move.

She smiled awkwardly, looking around the room, probably for someone to come and bail her out.

“No one’s going to rescue you this time … Ruthie.” He stepped closer and noticed she was breathing rapidly; it was doing wonderful things to her cleavage. “Who is Ruthie, by the way? Did you just make her up on the spot?”

“I knew who you were the instant I saw you.” Her chin rose. “Your … reputation precedes you.”

“Ah. Well, I’ll tell you what I tell everybody else: don’t believe everything you read.” He cocked his head. “Why did you lie about who you were?”

She shrugged her beautiful shoulders. “I don’t know. I guess I wanted to hear an honest opinion of my work. You would hardly have been straight with me had you known I painted it.”

Gus leaned in to whisper in her ear. She smelled like lavender. “I assure you, Miss Starling, I would be nothing but straight with you.”

The young woman stepped back and glared at him. “I’m sure you would be, Mr. Wolff, until the next distraction turned your head.” She made a point of looking around the room. “Speaking of which, where is the melodious Miss Lindemann? I don’t see her anywhere.”

This woman was a pip. Gus wanted more of her. He captured her gaze and answered calmly. “Miss Lindemann and I aren’t seeing each other anymore. I haven’t been with a woman since before you and I met.” He mimicked her perusal of the ballroom, even though most of the guests had migrated to the dining area. “Come to think of it, where is your swain—or swains, as the case may be? Let’s see, there’s Charles, from the other night, and then there’s your live-in. What’s his name? Sander? My my, how do you keep them all straight?” He smiled wickedly. “Oh dear, there’s that word ‘straight’ again.”

Miss Starling’s delectable face, which had shown wariness before, now exploded into a storm of outrage. Apparently so mad she didn’t care who saw her, she pulled her arm back to slap Gus’s face. He caught her arm easily and wrapped it around his waist. Once again he pulled her close and nuzzled her. “I don’t give a damn who you’re with today, as long as you’re with me tomorrow.”

“That is never going to happen,” she hissed.

“Never say never,” he said, letting his breath caress her ear. He let go of her and stepped back, his voice rising to a normal level and his tone serious and heartfelt. “I am giving it to you straight, Miss Starling. I don’t know a lot about art, but I do know how something makes me feel. Your work is astonishing. You know how to capture the … what shall I call it? The truth of a given moment. That is rare and something to be very, very proud of.”

The siren opened her mouth but no words came out. As they stared at each other, Will walked up. “Ah, I see you’ve finally met Lia,” he said. “Isn’t she spectacular?”

Keeping his eyes on her, Gus concurred with a murmured, “Yes indeed. Spectacular.”


A native of northern California, A.B. Michaels holds master’s degrees in history and broadcasting, and worked for many years in the public relations and marketing fields.

She currently lives in Boise, Idaho with her husband and two furry “sons” who don’t seem to realize they’re just dogs. For more information about the Sinner's Grove series, including upcoming titles, please visit: