Excerpt and Giveaway: No Perfect Secret by Jackie Weger 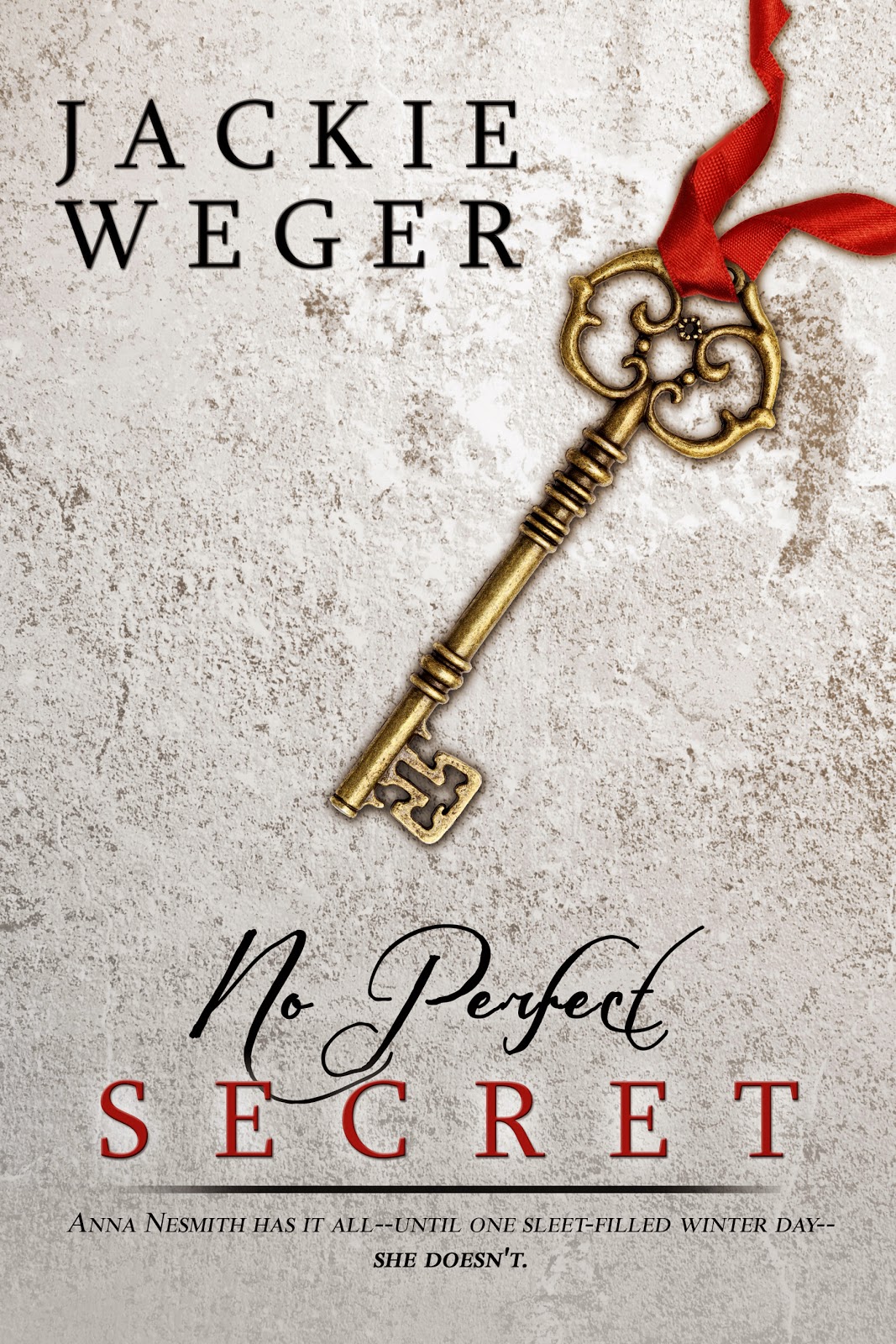 A single secret begets a layer of lies.

Anna Nesmith believes she has it all–a great marriage, a dream job and a home of her own. When a State Department investigator begins asking questions, Anna’s ordered world implodes. Frank Caburn is man to the bone and manufactures testosterone like Frito Lay does chips. Instantly attracted to Anna, he is determined to make her his own–if only she can pick through the emotional rubble to find her bruised heart can love once again.

Great read, makes you want to keep coming back for more. Easily get lost in the characters and the humor is great, catches you off guard sometimes, in a good way. - Goodreads

Anna heard the insistent tattoo of the brass doorknocker as she emerged into the hall. She put her eye to the viewer. The porch light was faint, wobbly in the wind and sleet. She could make out few details. In an aside she thought tomorrow’s news would be all about the damage to the cherry trees. The man had his muffler wrapped around his face almost to his eyes, and those were enigmatic. She saw his hand come up to the knocker again. She opened the door a crack. "Yes? May I help you?”

He unwound the muffler from his face. “Government business, Mrs Nesmith. I have a few questions. May I come in?”

Clara-Alice hovered nervously behind her. “What did he say?”

Anna took her mother-in-law’s arm. “Give me a minute to find out. Now, be a dear, and put the kettle on for tea.”

Anna turned back to the door, still cracked open and allowing in freezing air. “Sorry. Show me some identification.”

“Sure thing.” Teeth chattering, he pulled off a leather glove, slipped his hand into his inside coat pocket, and produced his wallet. He flipped it open to reveal his photograph and ID. “State Department.”

Anna felt a sudden weakness envelop her. Kevin worked for the State Department. “Has something happened?”

“Not that I know. We’re doing routine security checks on our couriers. Mrs Nesmith—Anna—your given name is Anna, right? In case you haven’t noticed, I’m freezing my buns off out here.”

He looked at her with a sense of frost and frustration. “Sure, Okay. Where would you like for me to drip?”

The wind died abruptly, as if pausing for breath. He stepped inside and closed the door behind himself and not at all gently. Next he unwound his muffler, dropped it to the floor and wiped his feet on it.

Anna stepped back. Oh great! Another person with attitude. “That looks awfully like cashmere,” she said of the muffler. Cold was coming off him in waves reminding her that she was barefoot and entirely naked beneath the caftan.

“Yep, early Christmas present.” He pulled off his other glove and stuffed both into a pocket then shrugged out of his overcoat. There was an antique coat tree in the foyer. Sans invitation, he hung his coat on it. Sleet was sliding off the coat onto the floor—but not the rug. Anna affected not to notice.

“You let him in...” came accusingly from behind.

“This is my mother-in-law,” Anna said to the man. Damn. She’d seen his ID, seen his picture—but had paid not one whit of attention to his name. “Clara-Alice, would you get a towel for the gentleman.”

“No. I’ll watch him. You get the towel.” The look on her face said she was ready to hit one or both of them over the head with a tire iron or golf club.

“Fine, watch him. Answer his questions, too.”

Clara-Alice paled. “What questions? About what? I don’t know anything.”

“Me, either,” Anna said and left the two of them standing the foyer. She went into the guest bathroom, buried her face into a wad of towels, and screamed. I don’t want to do this anymore. God help me, I don’t. Why, oh, why couldn't Kevin acknowledge that his mother was an affliction on their marriage? She sat on the edge of the cold porcelain tub and pondered her past and her future because the present was too awful to contemplate.

“What’s going on with you?” said the man from State, standing in the bathroom door. “I heard a funny noise—sounded like a muffled scream.”

Anna stood. “Nothing is going on with me. I’m having a bad hair day.” She shoved the towels into his hands and moved past him, down the hall through the dining room and into the kitchen. The kettle was sputtering steam and singing. She put Lipton tea bags into cups and poured in the boiling water. The steam felt good on her face.
~~~~

“Does the old lady have dementia or something?” Caburn emerged into the kitchen drying his face and head. Finished, he draped the towel on the back of a chair, ran his fingers through his hair, smiled and looked at Anna as if he’d known her a lifetime. Next, he was looking into the stainless steel fridge, taking out the half-and-half, trying to be casual, wondering what he had stepped into. Nothing in Nesmith’s file had prepared him for this pair of loonies. He understood about old people going off—his grandfather had. But a beautiful woman? Going into the bathroom and screaming her head off? That was scary—Virginia Wolff scary. Or Maybe Ayn Rand, who wrote wonderful books but lived dead evil—using people. He was half-way through Atlas Shrugged. Maybe he could finish here, go home, pop a beer, put his feet up and read another few chapters. That is, if he didn't get killed by some fool driver on icy slick streets.

“Clara-Alice was in the Pentagon on 9/11.” Anna answered. She loathed this type of bureaucrat that the Patriot Act had let loose on ordinary citizens. She didn't think the Act concerned people much any more, but in the nation’s capital it was alive and well. She held her tongue on that score because she was anxious about what the visit meant for Kevin. Everything in this city was political and above the fold. The rest of the inhabitants were worker bees, seldom on anyone’s radar. Now, Kevin was in a spotlight of some sort. It couldn't be good and she didn't think it routine for anyone from the State Department to come knocking on her door in the worst of a winter storm. Or putter around in her kitchen as if he owned it, either.

The man exhaled. “That was bad.”

“Still is,” Anna said while fishing for a teabag with a spoon. She poured in the half-and-half. So much for a year at Le Cordon Bleu where one brewed tea in a porcelain pot, allowed to steep at least three minutes, then gently poured it into delicate cups; warmed cream added if desired. “I’m sorry. I didn't catch your name. And, I’m sorry about your scarf.” I’m sorry about 9/11, I’m sorry Kevin isn't home, I’m sorry Clara-Alice is so difficult; and I’m sorry I can’t cope anymore. God, are you listening? 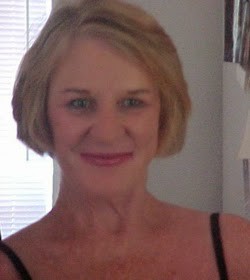 A South Alabama native, Jackie Weger has been writing novels off and on for thirty years. She enjoys destination travel--going to new and strange places, meeting the natives, learning their customs, their foods, how they survive good times and bad. She lived part of one winter with trappers in the Louisiana Swamps, volunteered at a sister of Mercy Mission in Colon, Panama--and had one of the most interesting conversations in her life with an old man and his dog as they sat on a bench waiting for a train in the Village of Versailles.

Thank you for hosting "No Perfect Secret" today.

Thank You! Selenity Jade. Wow! You have some fab books on your site. So beautifully done, too. Thank you so much for hosting the release of No Perfect Secret. Kindle Unlimited subscribers read for FREE or may put it on their wish list. Again, thank you for sharing No Perfect Secret with your followers. Highest Regards, Jackie Weger

Congrats on the release - I LOVE the cover. I'm kind of enamored with anything involving keys

Stefanie! Thank you. I love the keys.
I lose mine daily! but, I Love keys too.

congratulation for the new release...

Congratulations on the new release!

Thank you all. I feel as if I've made some really nice new friends here. I so appreciate you helping to make the release of No Perfect Secret a success.Especially since this is the first time I've 'launched' a new release and don't know what the heck I'm doing!
Please don't be a stranger. Stop over on my FB page now and again and say hello. I'd love to have you. Best,
JackieWeger

congratulations for the release of no perfect secret!!

Congrats on the release! Sounds like an awesome book!

Thank you Karen and Collenga. It is so nice of you to take the time to comment. We indie authors are so appreciative of the simple kindnesses of strangers.

Best to you and yours.
JackieWeger

Congrats on your new release!

Congratulations on the new release!