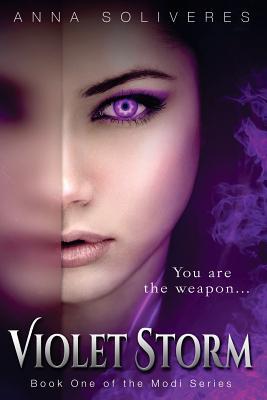 Several hundred years into the future, The Cleansing, known to some as the End of Days, forced the government to create Arks to shelter its people. When Earth became habitable again, new territories rose up from the ashes: Agria, the City of Light, and the Outer Boundaries. For a while, they lived in peace.

A brilliant surgeon known for his invention of Modi’s—the only cure for the deadly disease, vaincre—has gone rogue with his experiments, and the Monarchy is desperate to shut him down. That’s where Aeva Storm comes in, a champion athlete with an ego to match. Aeva is the surgeon’s secret weapon against the Monarchy. And they’ll never know what hit them. After reconstructing her body to become a Modi unlike any he’s ever created, Aeva is forced into a fight against all odds. She’ll have to break loyalties, hurt family, and turn her back on newly awakened love. Thousands of lives hang in the balance in a battle that will set forth a new era.

Join Aeva on her quest to see whether she’s got what it takes to go up against the most powerful humans ever created.


GUEST POST
Top ten reasons to read SF
I tried really hard to come up with ten, but I only got up to nine. Hope that's okay! :)

1. Exploring the future. Sci-Fi novels offer some of the biggest "what if" scenarios and possibilities whether we're all living out in space, or living in a far more sustainable future/present on earth (or it could even be post-apocalyptic!).

2. Unique settings and landscapes - It's always amazing to explore new landscapes whether it be on other planets or our own. It's an opportunity to "see" and venture onto new worlds without ever having to actually travel.

3. Inspires Innovation - Sci-Fi created our first cyborgs, androids, laser blasters, 3D projected images, and walking, talking artificial intelligence. At least I think it did, and that's because I first learned about them in science fiction novels!

4. Humanity - Talk about expanding our cultural awareness. Science Fiction brings in new cultures, new worlds, and new people which means a whole new level of interaction. It brings awareness to bigotry and intolerance, and prejudices in the areas of race, gender, culture and even special needs. It also shows how our differences can work together to overcome challenges. Just think of Guardians of the Galaxy where a raccoon is best friends with a walking tree.

6. Expands our world and the universe - The universe is big. Really big. Sci-Fi novels take us to new worlds, exploring galaxies and other planets. We are introduced to new creatures and species that can be similar to ourselves or venture into the strange and incomprehensible.

7. Social Consequences - It allows us a chance to see the possible outcome of our choices and our innovations: artificial intelligence, advanced robots, nuclear weapons, unsustainable or sustainable living.

8. Different kind of heroes - In Sci-Fi, heroes can come in differences shapes and sizes. In Ender's Game, a young teenage boy is recruited to lead a fight against a genocidal alien race. And...who doesn't love Groot?

9. Conflict - with all the reasons above, Sci-Fi novels bring on a whole new set of conflicts and moral dilemma's. Whether it's with ourselves (Hunger Games), against robots (I, Robot), and other alien species (Ender's Game).

Anna Soliveres has always been a storyteller but it wasn’t until her early twenties when she began writing novel length works. The result was an enthusiasm to get better at the craft until her work could be shared with the world. Releasing in March 2014, VIOLET STORM is her debut novel. Anna is currently working on another young adult sci-fi series, titled SNOW DOLLS, set to release in late 2014. To learn more, please visit her at:

Thanks for being on the tour, Cremona! :)

This was so fun and challenging - loved it! :) Thank you for being on the tour, Cremona!

Thank you so much the prizes sound AWESOME :D

I am in LOVE with this cover. I think I want to read it JUST for the cover! ^_^

I haven't read anything yet by Anna but I can't wait to read this!

This sounds great but your Snow Dolls coming out sounds good too!

thanks for the giveaway!

I can't wait to read this it sounds amazing, and the cover rocks!! I just gota say from reading that excerpt I could so see this being turned into a movie, great story line.!!! And what a amazing giveaway a fit bit wow!! plus everything else amazing!!

This cover rocks! Purple is my fave color, and to have her eyes purple, too? Awesome! Want to reads this book super bad!

Beautiful cover! Thanks for the giveaway.

I love the cover of this book, it's stunning!

Just gota say, I love the show the 100 and Nikita and for some reason this reminds me of if the two of them merged and that is amazing, it sounds soooo gooooood!! I love that it is in the future I love to read a book that takes me from this world to another in some way, and this will do that!! I can't wait to read this, I bet it will be a super fast read for me, won't be able to put it down, I read at the gym while working out so what a great prize if i could get lucky to win a fit bit wow wow wow!!! Thank you so much for a amazing giveaway. thank you.

This has a great cover and interesting plot. Thanks for the chance to win!

thanks for the giveaway and congrats on your book!

thanks for the chance and congrats!