Interview and Giveaway: Scandal at Almack's by Gloria Gay 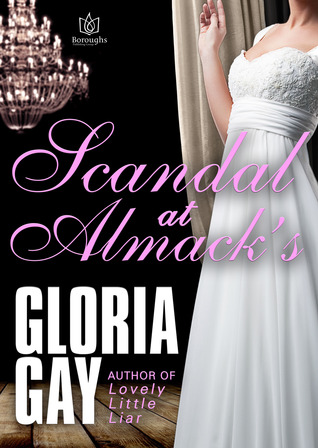 Beautiful Jenny Longtree was expected to do her duty and accept the marriage proposal of a man she abhorred, Calvin Hazeldeck, an old and rich mortician whose offer of a marriage settlement would save her family from destitution brought about by her father’s bad shipping investments.

Then unexpectedly, Jenny’s dear uncle, Sir Roger Addington, who had been informed of the family’s dilemma, offered his favorite niece a London social season as a last chance to find a husband on her own.

But in the whirl of the London season, Jenny realizes that without a dowry her chances of obtaining a marriage proposal are practically non-existent.

Then on the last ball of Almack’s, and when Jenny feels that time is slipping away, Lady Jersey, the head patroness of Almack’s, introduces her to Sebastian Billington, Lord Corville. As they dance the waltz, Jenny realizes she has fallen in love at first sight with a man she is likely never to see again.

And during the seductive dance with Lord Corville, something happens that has Jenny lying on the floor at Lord Corville’s feet, having momentarily passed out. When she comes to, she finds a sea of faces staring down at her and scandal exploding all around her.

MB's INTERVIEW
Thank you, Mrs.Gay
Why, in your opinion, the Regency/ Historical Romance is a loved genre?
All the ingredients for fairy tale romance are in a neat package in the English Regency period. For instance (1) there was a rigid class system that provided an endless supply of knights, lords: viscounts, barons, earls, marquesses, dukes. During the summer these lords had to participate in Parliament. The families of the aristocracy and gentry took their daughters to London because there was an abundance of eligible bachelors. (2) Anxious to marry their daughters, parents took their daughters to what became known as “the Season” in a merry-go-round of balls and soirees, picnics, house parties and masquerades. (3) There was a war against Napoleon going on, which gave forth an endless supply of romantic officers and possibilities for romantic plots. (4) The fashion, still coming from France, had become lighter, airier and had allowed women to discard the cumbersome bone frames for petticoats and girdles. (5) And it was an age where a middle class had become important with the beginning of the Industrial Revolution. Trade might be looked down on but mill and factory millionaires’ daughters must be allowed in society to refurbish aristocrats’ lost fortunes to card games and races. It was an exciting time with endless possibilities for romantic plots amid a lot of enjoyable activities apart from the balls and parties, such as the theater, the opera, musicales, Vauxhall Gardens, shopping on Bond Street and the daily ritual of the promenade in Hyde Park where people went to see and be seen afoot or in carriages and on horseback. (6) Last and not least there was Gretna Green, a town on the Scottish border where eloping couples could get married without parental consent, which gave endless possibilities for romantic escapes by couples.

What are the top 5 characteristics of a Regency/Historical Romance and are they compulsory?
(1) The hero and heroine that either belonged to the gentry (knights and baronets), the aristocracy (lords: viscounts, barons, earls, marquesses, dukes, princes) or had fallen from their place in any of the above, or a gentleman’s son or daughter (for instance a vicar or surgeon’s daughter) that had fallen on hard times and had to earn their living either as a governess, companion, music instructor etc.
(2) The period would be from 1811 to 1820 (strict Regency when the Prince Regent ruled in place of his father, who was blind and ill.) But these dates can be stretched back a little to the 18th century and forward beyond 1820 to the middle of the 19th Century, and before the beginning of the Victorian Period.
(3) There must be a romantic plot and a happy ending. All sorts of romantic entanglements make for an interesting romance and villains and villainesses abound to make the plot more interesting. A lot of the Regency historical novels are often based on the Cinderella story, a little or a lot. And many heroines have evil relatives or even evil parents.

What kind of characters do you love?
I, as most readers of Regency romances, love feisty heroines that have a kind heart and a good sense of humor. But I have sometimes written about a heroine who is mousy and put upon and rises above incredible odds. That kind of heroine is also a challenge.

Are there some special challenges to express the lust and love in a Regency/Historical Romance?
Romantic scenes have become harder to do because there is a pressure to make them sexier and more graphic, since most of the writers are now doing them that way. Not too long ago what is considered tame now was considered steamy then. Love scenes have become increasingly hotter and more graphic. That is the part that I take the greatest care with in my writing. I spend a lot of time on these scenes because I want to make the emotion and the love that has developed between the hero and the heroine shine through more than anything else.

You write and paint. How important is the visual in your books?
I have a very graphic mind as a result of the fact that I’ve been an artist since I was in Kindergarten. It helps me a lot in my writing because scenes pop up in my mind constantly when I’m writing a book and I start to give my characters qualities and unique features that I sort of “paint” on them as I start to form them. Really enjoyable!

Lord Corville was surprised that Lady Jersey had led him directly into a vision of lovely youth. Usually wallflower duty was how it sounded, giving an opportunity to dance a few sets to girls who were in their first season and not likely to obtain dancing partners on their own because they lacked pedigree or were pretty enough but lacked an attractive dowry. The Almack’s patronesses took their duty to young girls in their first or second season very seriously, and in every ball the two in charge could be seen walking about, matching young ladies to reluctant young men.

Sebastian seldom if ever glanced toward the wallflower area, but now he regretted it. The moment he gave his gloved hand to this girl and led her to the dance floor, it was all he could do to keep his balance until they began their waltz.

Her touch was so sensual, he felt her hand not on his but directly on his groin. A hot frisson coursed along his nerve endings, and his whole body shuddered in anticipation. If he felt so much with only the soft touch of her hand on his, what would he feel with her in his arms?

Suddenly realizing where his mind was going, he shook off such outlandish thoughts. He was a bit foxed and couldn’t even remember what Lady Jersey said the girl’s name was during the introduction. He should have skipped that stop at Rothyn’s townhouse, as they’d dipped into bottles of claret before coming here.

Of course, it was turning out amazingly easy to keep his promise to his sister Camie. One dance with a wallflower debutante? Why this beautiful girl lacked dance partners was beyond his understanding. She was as lovely and as rare as an orchid, and her scent intoxicated him even more than the claret.

He had never felt such jumping sensations as he was now feeling while waltzing with her. Her eyes as she looked at him were sparkling blue aquamarines, and the tingling ripple the mere touch of her hand had started now throbbed along his groin so that his hand tightened on hers even as his breeches tightened. He quickly forced his eyes away from her lithe form, for just a quick glance at her curves unhinged him.

They swayed around the vast ballroom, and the lights from a thousand candles and the twirling couples confused him. The lovely girl in his arms became three identical girls who twirled round and round like the racing dials of a mad clock. He heard the waning notes of the waltz as it was coming to its end and felt so dizzy that, had he not held her, he would have lost his balance. He looked into the girl’s beautiful eyes and his gaze drifted downward. Her breasts, the tops of them peeking alluringly from her filmy gown, were so fetching that he wondered when he had ever seen a better pair. There was a small dark mole on her left breast, and a tiny rosebud by it, and so compelling was the tiny beauty mark that he was hypnotized.

The music had stopped. He looked into the girl’s lovely blue eyes and wondered why they were wide with alarm, and her voice was loud and clear in the silence that followed the conclusion of the waltz.

Her hand on his shoulder slipped away as she fell to the floor, her crumpling body settling softly on his feet. Sebastian leaned down toward her prone body.

After a few seconds, the girl opened her eyes. A crowd had rushed forward, and there was a large circle of people around her and Sebastian, three or four deep, looking down with concern. And silence, as everyone just stared.

The girl was helped up by two gentlemen while Lord Corville continued to stare, speechless.

Lady Jersey broke the silence. “What happened to you, my dear?”

A twittering of exclamations rose like a deafening wave, and then sudden silence fell again as the crowd waited in suspense for the girl’s reply.

The girl spoke slowly but clearly, so that everyone heard her words. She looked directly into Lord Corville’s eyes and said, “Lord Corville touched me inappropriately.”

Goodreads ** Shelfari ** Smashwords ** Amazon ** Barnes&Noble ** iTunes
About the author:
Gloria Gay has lived in San Diego, California the greater part of her life, where she worked as a legal secretary for twenty-five years and as a stringer for a local newspaper. Her heart, though, has always been with art and literature and it was one of the happiest days of her life when she wrote her first book.

She lives with her husband, Enrique, an architect, in San Diego, California, and couldn’t be happier that their children and grand-children live nearby.

Gloria, I learned so much more about the Regency Period in your answer. Thanks for enlightening me.

Thanks for participating in the Tour. Victoria at My Family's Heart