Guest Post and Giveaway: What Happens in Venice by Diana Cachey 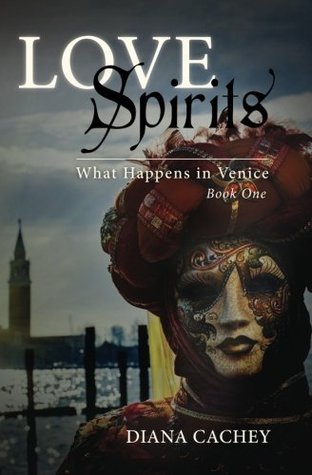 As Interpol expert Louisa Mangotti is learning, ghosts watch over Venice. Can she trust them—or her ex-lover—when spirits offer confusing clues to solve a double murder in this sexy paranormal mystery?

Still unnerved by the notion that Venetian ghosts are real, Louisa delves further into the deaths of two glassmakers while juggling the lustful manipulations of her ex-lover, Matteo, whose role in the murders grows murkier.

When Louisa's best friend, "Rouge," arrives for Carnival to sample its masked men, she complicates the situation further by encouraging the sisters to embrace the pleasures of Venice.

Paranormal clues and apparitions lead Louisa deeper into the lagoon and she is forced to reluctantly enlist Matteo’s support. Can she trust him, or will this ghostly lagoon lure prove deadly?


Venice has its ghosts. They haunt its byways and canals. They linger on its numerous bridges and waft through its beautiful architecture—and they've taken a definite interest in Interpol expert Louisa Mangotti.

In Lagoon Lure, Louisa continues investigating the murder of two glassmakers she began in Love Spirits. Guided by clues sent from otherworldly sources, she struggles to determine what role her seductive ex-lover Matteo played in the deaths, constantly tempted by his handsome looks, his charm, and the volatile chemistry between them.

While Louisa is led by the ghosts to a sunken ship in the murky lagoon, her sister, Barbara, and best friend, "Rouge," embark on their own carnal explorations of Venice, sampling the men who flock to Carnival.

Amid corruption, conspiracy, and Venice's legendary sexual energy, it's all Louisa can do to think straight, let alone untangle this web of mystery. The ghosts, however, want her to persevere.


Louisa Mangotti is a gorgeous American lawyer and Interpol expert who, after being offered a job working with the international crime unit in Venice, receives a mysterious postcard from the Venetian Ghosts, the ancient protectors of the Republic. But Louisa assumes her bad-boy ex, Matteo, sent it in a quixotic attempt to gain her attention.

Louisa may have dismissed the ghosts, but the ghosts aren't quite done with her. When the bodies of two glassmakers wash up on Murano Island, the cryptic messages persist. Reluctantly, Louisa calls upon Matteo to help decipher the clues. And before she knows it, a flame that was never fully extinguished is rekindled.

Sensing that her sister is in over her head, Barbara Mangotti rushes to the rescue, only to be lured away by two handsome Venetian men.

With time running out, can the two beauties solve a crime that could threaten the city of Venice itself?


I love travel, I love Italy and my favorite city in the world is Venice. The lagoon town’s romantic beauty inspired me to return again & again, just as it has inspired writers, composers and painters for centuries. So in my trinity of books, What Happens in Venice, the characters find mystery, love & allure in the shadowy mazes of haunted Venice, of course.

HOW IT ALL STARTED
I practiced law for years, but wanted to leave the rat race to earn money while traveling. In college and law school, I often took several jobs to support myself and pay tuition, so until I graduated. I couldn’t afford much travel. It didn’t take long before I was hooked.

I began this journey after I quit my job as a prosecutor and became a contract attorney for law firms, which allowed me flexibility to explore the world. I taught scuba diving during my travels to the tropics (by the way, I dove with sharks in the sea and in an aquarium shark tank and they never tried to bite) and I worked flexible hours as a lawyer, real estate investor and marketer of liquid vitamins.
But writing still held my heart. Before law school, I achieved a degree in English literature and wrote poems, plays, essays, stories, articles. During law school, I published scholarly articles, taught law students to write and became the first female Editor-in-Chief of law journal.

Yet I never followed my dream to write full-time. Until now.

FROM LAWYER TO WEBSITES, VIDEOS & NOVELS:
First I created a website where I published nonfiction pieces to discuss, and hopefully show you, how to follow your dreams too. I rant about what we all rant about -- the foibles of our modern society -- then offer solutions and methods for obtaining wealth and wellness.

With a growing Twitter community of over 100,000 people, I also launched HAUNTED-PALOOZA -- where online ghosts rule. During October, this online Halloween party features ghosts, ghouls, guest writers, recipes, photos, videos, Top Tens & GIVEAWAYS! (Don’t miss out this year! Be there to be scared!)

I decided to write a novel and everyone wanted to hear about my travels to Venice. So in my trinity novel, What Happens In Venice (Love Spirits, Lagoon Lure & Magic Island), the characters escape to Venice. Protagonist Louisa Mangotti (a lawyer) lands a dream assignment with Venetian police but life among historical palazzos and canals takes twists and turns because some self-proclaimed ghosts — whom she doesn’t believe in but can’t seem to get rid of – chart a meandering course with clues about an unsolved murder. She’s forced to seek help from a formerlover, Venetian bad-boy Matteo, a man who broke her heart many times but still holds it within his reach. The recipe doesn’t cook up a gourmet Mediterranean dish that’s easy for Louisa to digest.

With all the Venetian history, legend, scenery and language in the book, I visited Venice to do further research for the novel. During one trip, I created videos while wandering secret Venice, featuring sites not found in typical guide books. What Happens In Venice videos have half million views so far and reveal Venetian food, churches, maze-like streets, glistening canals, handsome men, fashion and travel tips from locals Venetians and lucky transients like me. These secret haunts may lure you to Venice or to write a book about your own travel journeys.

Do you dream of ditching stress? Who hasn’t fantasized an escape from traffic, the mundane and the grind to a serene, exotic spot — with the intent to never come back? You know the answer! Leave a comment below to let us know YOUR dreams. Or watch my free videos, to learn, share and explore Venice.
ENJOY!
TOUR SCHEDULE
Goodreads ** CreateSpace ** Amazon ** Barnes&Noble
About the author:
Diana Cachey is a licensed attorney, published academic, and former adjunct law professor. She also holds a BA in English, and while in law school, she was the first female editor-in-chief of her university's law review.

The author of the novels Love Spirits and Lagoon Lure, Cachey trained with several New York Times best-selling writers whose sales total more than 70 million books. She has built a social media platform with over one hundred thousand Twitter users, and her popular YouTube channel featuring secret Venice locations has received over five hundred thousand views.

For more than a decade, Cachey has traveled to Venice, the setting of her novels, on extended trips several times a year. The cafés, restaurants, and many other haunts of Venice play a prominent role in her sexy paranormal mystery-romance series about a beautiful American lawyer guided by the Ghosts of Venice in the investigation of a hushed-up crime.

Thanks so much for the opportunity for this awesome giveaway!

What an intriguing Series. Thanks for steering me to a new author. Always looking for more great reads and enjoyed the post!

What an interesting story. I envy you and your venetian adventures. Love the masks. Thank you for the giveaway.

Awesome just the name Venetian stirs your mind thanks for the giveaway.

Both books sound so good. I love the covers. Thanks for having the giveaway.

This is some really beautiful cover art, yes I am a total cover gal LOL. I am looking forward to the tales with the investigating and ghosts - sounds right up my alley.

Sounds like a great paranormal mystery! Love the covers.

Super excited to read this! Love adventures like this!

HI Everyone! I want to respond personally to each & everyone of you but I've got such slow internet here (back in Colorado, ciao Venezia). THANK YOU for your kind words & GOOD LUCK in the giveaways. The masks I brought back from Venice for you are amazing. Please go to my website & email me personally. I would love to have you ALL review my books (& WIN too!!) love, Diana

I love the sounds of your books, and I live in colorado too.. what a small world the masks sound amazing, and the cover of your book is outstanding... just wow on all of it. thanks a bunch