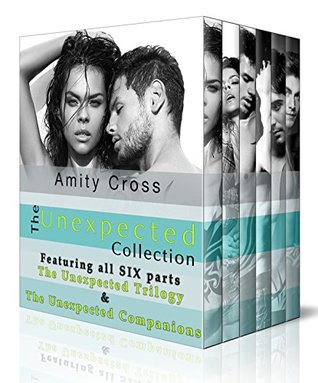 Unexpected (Unexpected #1) Blair and West's story - Part 1
One woman who’s given up on the world and a guy who’s desperate not to.
Sometimes you find the things you didn't even know you were looking for in the most unexpected places.

Unexplainable (Unexpected #2) Blair and West's story - Part 2
Jake West has kick started Blair's heart, but who will be the one to smash it apart?
Or will their unexplainable attraction be strong enough to save them both?

Unintended (Unexpected #3) Blair and West's story - Part 3
Blair believes she's broken beyond repair. West believes he's beyond redemption. All the biggest mistakes are unintended, but this time it might ruin them forever.

Undeniable (Unexpected #4) - Joe and Alexis' story
What would you do if you sat next to a smokin’ hot guy on a plane and he propositions you?

Unbearable (Unexpected #5) Sasha and Mick's story
One woman’s unrequited attraction to the hot as hell lead guitarist of the band, Affliction.

Unstoppable (Unexpected #6) Rob and Lilly's story
Rob saves a woman from being mugged and falls head-over-he doesn’t know what with her. Unfortunately, she’s got secrets of her own.

About the author:
Amity Cross isn't my real name. That's no secret.
I didn't want my Mum and my workplace to find out I wrote about doodles and tongue-in-cheek sexual innuendo.
I live in a leafy suburb of Melbourne writing about screwed up relationships and kick ass female leads that don't take s**t lying down.