Guest Post and Giveaway: The Emissary by Kristal Shaff 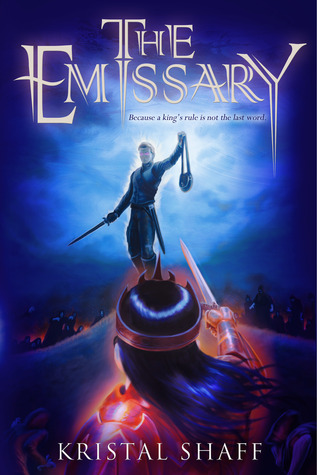 For hundreds of years, dark clouds covered the skies of Adamah, and an ageless king ruled. Those who emerged with one of six extraordinary Shay powers were forced into the king’s army, an unmatched force with inhuman Strength, Speed, Accuracy, Perception, Empathy, and Healing. With the army behind him, the king—a man who wields all six abilities—was invincible and unquestioned in his rule. To most, serving the king was an honor. But for others, it was a fate worse than death.

When seventeen-year-old Nolan Trividar witnesses the transformation of his brother from kind to cruel after entering the king’s army, he vows never to follow the same path.

So when his own power—the Shay of Accuracy—comes upon him at the Tournament of Awakening, Nolan conceals his emergence instead of joining the king’s ranks. For years, he traitorously hides his power, pretending to be only a gifted scribe. But when Nolan comes face -to-face with a deserter, the man discovers his secret.

To evade detection and a death sentence, Nolan escapes with the deserter and flees into a night filled with dark creatures who steal both powers and souls. He joins a resistance, a village hidden deep in the forest, filled with others who secretly wield a Shay. But his peace is short-lived when they discover that the dark clouds, undead creatures, their own decreasing powers, and even the king, are all connected.

Thanks so much to Mythical Books for having me stop by on my blog tour! I’m here today to talk about what makes a perfect main character in a fantasy novel.

It’s a great topic. Though, I can honestly say, there isn’t a list of “perfect features” because everyone’s concept of what is perfect depends on them. So I’m instead going to give you all a couple of examples of main characters I love, and another I didn’t love so much. Then I’ll tell you my opinion of what makes a great protagonist.

One of my favorite characters is from Brandon Sanderson’s new series, THE STORMLIGHT ARCHIVE. Kaladin is an awesome spearman, who comes into hard times and is sold into slavery. I don’t want to divulge too many details, but he is a man who fights against his own emotions and the circumstances pushed against him. He is flawed, but still strives to make his life, and others, better.

Another favorite character of mine is Harry Dresden from Jim Butcher’s series, THE DRESDEN FILES. He is witty, and powerful, and often nerdy, and he screws up frequently—and sometimes magnificently.

So to put it bluntly, a perfect main character is one who isn’t perfect.

Recently I tried to start reading a popular book. I won’t tell you the name, as I don’t like to talk badly of my fellow writers. But needless to say I tried—four times—to start the book, and I ended up putting it back down.

In this book, the main character is a skilled fighter/assassin. I’m sure the plot must be entertaining; a lot of people love it. But I honestly couldn’t get past the start because the author kept telling me how awesome her hero was. Every turn, she had to explain how the protagonist could kill this person or that, or her character could see, at a glance, how to wipe out a whole room full of enemies. She was soooo powerful and kick butt. But as I read, I saw nothing of her great, unmatched fighting abilities. I found it so incredibly unbelievable, because I didn’t see any proof of what she could do. And it made her too perfect.

It also annoyed me that the character had no self-doubt. How is so much confidence interesting at all? Isn’t it more fun to have a character struggle and rise above their fears and do it anyway. It makes them epic and grand and likeable. The assassin was just so arrogant and annoying. How can you be brave when you fear nothing?

Maybe it showed her flaws and doubts later in the book. I don’t know. I couldn’t get past the writer tooting her character’s horn, over and over again, at the beginning. It just didn’t feel believable, and therefore, I couldn’t stand the character and put the book away.
In fantasy, especially, when everything is so foreign and strange, when the world is so unfamiliar, where people can do things that we can only imagine, it is so very important for a character to be human enough for the reader to connect to.

A perfect main character is one that feel real.

Kristal Shaff grew up with books (and used to drive her mom crazy when she wouldn’t leave the library); her first job was even shelving books at the library. She loves anything creative, and you can often find her exploring strange and fantastical worlds in her choices of movies and fantasy fiction.

Kristal resides in Iowa with her farmer husband, numerous pets, and 3 awesome kids (plus one more on the way though the journey of adoption). When she isn’t writing, she is a professional face painter who enjoys making children smile.

Thanks so much for having me on your blog! :)

Awesome guest post! I know exactly what you mean about 'too perfect' characters that make me gag. ^_^