Two cops must go undercover at a local comicbook convention to stop Wil Wheaton’s murder.
Is this a buddy cop story or a crime-comedy? Neither. This is comic con... er, comicomedy? 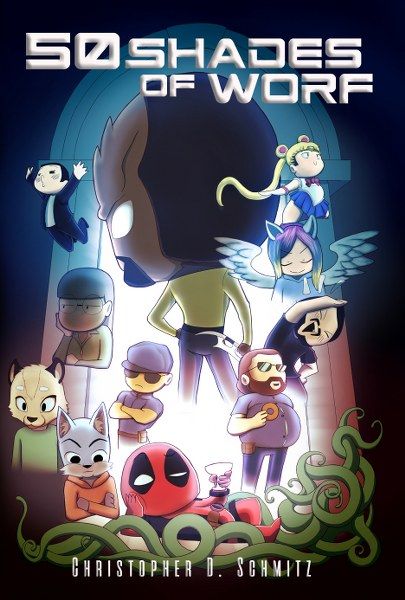 A back-alley brawl between the furries and the bronies.

Someone used a necronomicon to open a tentacle portal in the men’s room.

Is this a buddy cop story or a crime-comedy? Neither. This is comic con... er, comicomedy?

“I know where he went!” Jessica exclaimed. “There’s another lobby on the other side of the convention center—it’s the sixth street entrance.”
Diego nodded and sprinted forward to try and close the distance. Winded by the jog, Jessica tried to catch up.
The hallway suddenly erupted in pandemonium. Costumed denizens of the halls jumped out to bar his passage. Their brightly colored fabrics and masks whirled like a kaleidescope.
Jumping atop a chair a scrawny man dressed as a Pink Panther, except that he wore a leather thong, screamed, “Another intruder! The Bronies continue to violate the sacred truce and cross through the neutral zone!”
Diego barely slowed as he looked back at Jessica, she pushed and shoved at the costumers who clawed at her. “Furries! Run!”
The detective plowed through as the furries raised fists high, brandishing makeshift weapons and costume props like some kind of My Little Pony Mad Max hybrid.
Pink Panther yelled, “We must defend our honor and our borders!”
His minions screamed their support. “Justice for Jonah!”
Jonah, a turquoise leopard, leaned against a cement block wall with his mask off. He nursed a bloody nose—probably from Houdek—and mumbled, “I’m okay, you guys. Really.”
The cry for blood only intensified as Jessica caught up to Diego. Together, they burst through the line and fled with thirty angry furries chasing them like a faux-fur flood.
Directly ahead, a bare-chested, overweight man in a mullet and neon spandex crawled atop a stack of tables and howled. “The furries want to go to war with the Bronies? So be it; Bronies Assemble!”
The other side of the hallway suddenly filled with humanoid men and a few women wearing fake ears and brightly colored hair, tails, and wigs. Someone screamed from their rear, “Super magic friendship beat-down!”
Diego grabbed Jessica’s hand and led her through the oncoming horde. He lowered his shoulder and pushed through with relative ease. Bronies bounced off his tough exterior with whimpers and squeaks.
“Oh no!” Jessica said beneath her breath. “It’s a full-blown turf war beneath the Furries and the Bronies… the prophecy is finally coming true.”
Just as they emerged from the crowd of colorful, fluffy anarchy, the two forces collided. They wheezed and shrieked as they smashed against each other. “You were supposed to be one of us!” a furry screamed. “For Equestria!” several Bronies shouted as they curb-stomped a fox-girl. “We’re twenty percent cooler than you!”
Diego and Jessica finally crashed through the fire door and into the sixth street lobby. Immediately they spotted a long-haired man stepping into a group of non-Japanese Japanese schoolgirls. With his broad shoulders and dark suit he stuck out like a sore thumb, no matter how he tried to hide.
“There!” Jessica pointed.
Diego sprinted ahead and speared him from the back, tackling him like an eager linebacker. The man screamed with a feminine shriek as the detective took him down.
Pinning him to the ground, a brown wig fell from the costumed genderbender. She howled for help and the cosplaying schoolgirls rained down fists and feet upon detective Diego. They screamed their mantra. “Cosplay is not consent! Cosplay is not consent!”

About the author:
Christopher D. Schmitz is an author of fiction and nonfiction books. Before throwing himself into book writing he had published short fiction in more than twenty outlets. In addition to a day-job working with teenagers, he also writes for a local newspaper, speaks/sells books at comic-cons and other festivals, runs a blog for authors, and makes an insanely tiny amount of money playing the bagpipes.

He grew up as a product of the 1980s and thinks Stranger Things is "basically my biography." He lives in rural Minnesota where he drinks unsafe amounts of coffee with his family and three rambunctious dogs. The caffeine shakes keeps the cold from killing him. 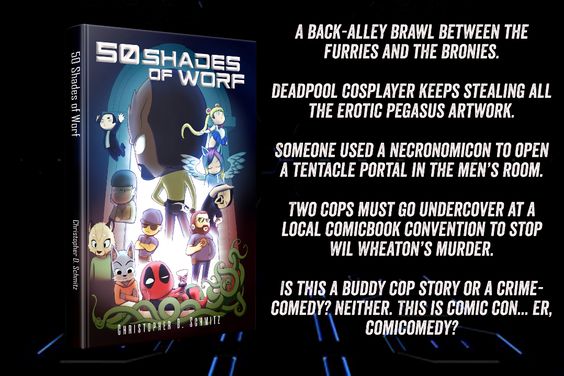 Sounds pretty cool, thanks for sharing!

thanks guys! I tried to really embrace my inner geek and my initial idea for the story was something like Brooklyn 99 or Hot Fuzz goes to comiccon

This sounds like a great read for Trekkies! Thanks so much for sharing the book details.

This sounds like a blast and I really enjoyed the excerpt. Love the cover for this too!

Love the cover.. sharing this with my grandson.. he would love it...

Love the cover! I enjoyed the excerpt and think this will be a fun read. Thanks for sharing. Best wishes to the author on the new release.