nowhere to flee... Much Ado About a Widow (The Widows' Club #4) by Jenna Jaxon

Lady Georgina Kirkpatrick defied her family, jilted her fiancé, and married the man she loved. But when her husband died at Waterloo, she was delivered right back into her father’s power . . . 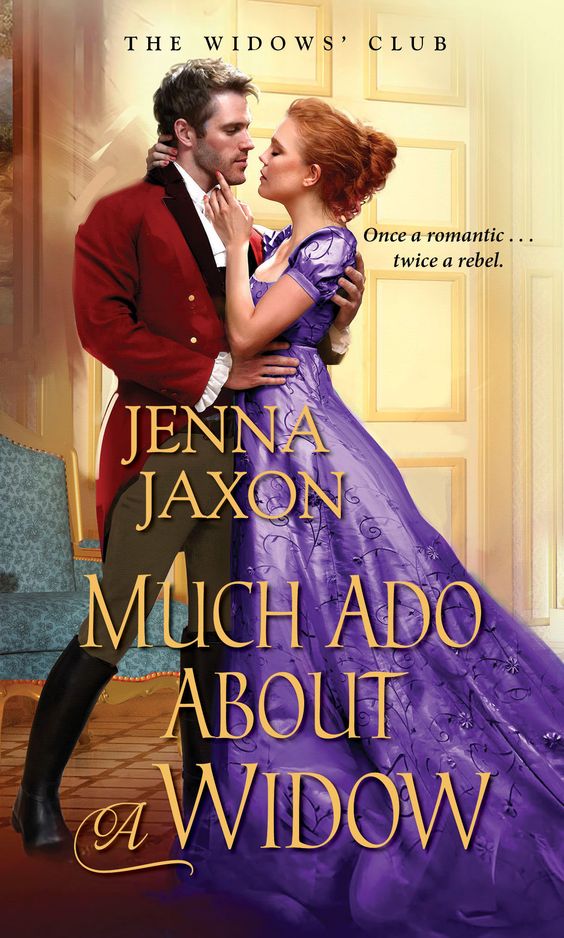 Lady Georgina Kirkpatrick defied her family, jilted her fiancé, and married the man she loved. But when her husband died at Waterloo, she was delivered right back into her father’s power . . .

Victory is sweet—but England’s triumph was Georgie’s rout. Now that she’s widowed, the loathsome marriage her father first arranged has simply been renegotiated. With neither money nor rights, and nowhere to flee, all she can do is cherish her last weeks of freedom. . . . Until a band of ruffians overtakes her carriage and kidnaps her. When she escapes in seaside Brighton and encounters her brother’s rather wild friend, Lord St. Just—whom she suspects aspires to be a pirate—she’s prepared to entertain more of his adventurous suggestions than usual . . .

St. Just knows his mind and his duty, and he loves a challenge. Helping a fair lady make her farewells to hoodlums suits his talents well. Within the hour he has Georgie, her lady’s maid—and her little dog too—sailing for his castle in Cornwall. Meanwhile, the lady’s entire family, her kidnappers, and her scheming intended are in pursuit. But as he and the indomitable Georgie grow closer, he begins to suspect that together they will prove a match for them all . . .

A key grated in the lock. Lulu growled and stalked toward it, the fur on her back rising straight up.

“Not yet, Lulu.” Georgie gathered the leash. “Don’t bite him quite yet.”

Her dog stopped advancing on the door; however, the growling did not abate. Better be safe. She gathered Lulu into her arms. “I’ll give you the signal.”

The cabin door swung open, revealing Lord St. Just, an impossibly broad grin on his face. “Wait until I tell you what my men and I just did.”

“You don’t have to tell me, my lord. I already know.” Georgie glared at him and held Lulu tighter. The little animal was shaking, and Georgie was sure if she loosened her grip Lulu would launch herself at the unwary marquess. Serve him right too.

“You do?” He frowned and cocked his head, which made him look like a puzzled puppy. Lulu looked just like that whenever she was unhappy. But what did he have to be unhappy about? He was the one who had kidnapped her.

“You have set sail, my lord, with me and my maid aboard against our wills. Many sensible people call that kidnapping.” She’d always known this man was a pirate. In fact, she’d told her brother so. She handed Lulu to Clara before the dog could leap out of her arms and tear at his lordship’s throat. If anyone was going to attack the marquess, it would be Georgie herself. Plant him a facer and see how he liked being set upon.

“Oh.” The impossible man was all smiles again. “Yes, we had to put out or miss the evening tide.” His grin had returned, showing many straight, white teeth. “But we did manage to steal your trunks, Lady Georgina. If you will consider yourself abducted again, at least rejoice in the fact that you will have clean linen throughout the ordeal.”

About the author:
Jenna Jaxon is a multi-published author of historical and contemporary romance. She has been reading and writing historical romance since she was a teenager. A romantic herself, she has always loved a dark side to the genre, a twist, suspense, a surprise. She tries to incorporate all of these elements into her own stories. She lives in Virginia with her family and a small menagerie of pets. When not reading or writing, she indulges her passion for the theatre, working with local theatres as a director. She often feels she is directing her characters on their own private stage.

She has equated her writing to an addiction to chocolate because once she starts she just can't stop.

the more you comment, the better your chances of winning
a Rafflecopter giveaway
Posted by CCAM at 4:30 PM

Love this romantic cover! What I have read about your book has peaked my interest! I cannot wait to read more!!

Thank you so much for hosting me on Release Day!

Thank you, Amy! I hope you enjoy the rest of Much Ado About A Widow!

And thanks for hopping to all the blogs today, Rita! I've seen you at a lot of stops and I really appreciate the support! :)

Lovely cover. She is wearing a beautiful gown.