on the run - Surrender (Surrender Series #1) by J.G. Sumner

"Kept me on the edge of my seat!
I loved this suspense romance. I am not a very big fan of stories narrated in third person. But this one got my attention from the very beginning and kept it all through the end. " - Viridiana, Goodreads 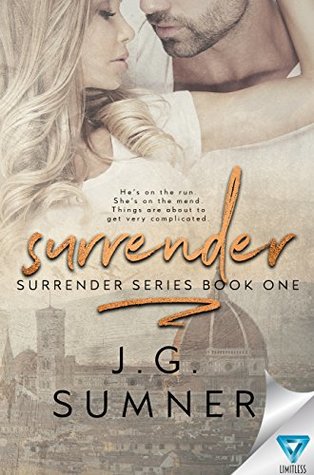 The cartel was certain they had wiped out the entire Bertalucci family…but they were wrong.

Tony Bertalucci is fighting to get the hell out of Italy before the cartel realizes their mistake, and one woman might be the key to his plan.

American Katherine Anderson is nursing a broken heart in Italy, but moving on becomes a whole lot easier when a handsome Italian man saunters into her life.

But Tony’s scheme goes south, and now they’re both on the run. As more clues start to surface, exposing the real reason Tony’s family was murdered, it leaves him facing an impossible situation…

Tony Bertalucci has left the witness protection program to reconnect with his beloved Kate. Unfortunately, danger still lurks. Tony has used his family fortune to provide security to keep them both safe.

Just when he thinks the threat is past and they can build a future together, the happiest day of their lives suddenly turns into a nightmare as Kate goes missing.

Matteo Bertalucci is scorned and looking for revenge. The only way to get back at his cousin for destroying his cartel and fortune is to take the one thing his cousin can’t live without…Kate.

Tony will stop at nothing to rescue Kate—and Kate won’t stop fighting until she’s free from the green-eyed monster forever.

About the author:
JG Sumner is a Registered Nurse who went rogue. As good as she was at starting IV's, she enjoys writing the down the stories in her head even more. Most of the time the characters won't stop pestering her until she has them down on paper.

JG can often be found with a glass of red wine or prosecco in front of her computer. When she's not creating, she enjoys the outdoors hiking, bike riding, snowboarding, and camping.

JG has a very dry sense of humor, and should never be taken too seriously. She loves to hear from her fans, and even those who aren't and would love to hear your opinion on her books.

JG writes romantic suspense/thrillers including: A Shot in the Dark, Into the Light, The Surrender Trilogy including Surrender, Shattered, and Saved which will be available through Limitless Publishing soon.