a dangerous intrigue - The Duchess and the Highwayman by Beverley Oakley

A duchess disguised as a lady’s maid; a gentleman parading as a highwayman.
She’s on the run from a murderer, he’s in pursuit of one… 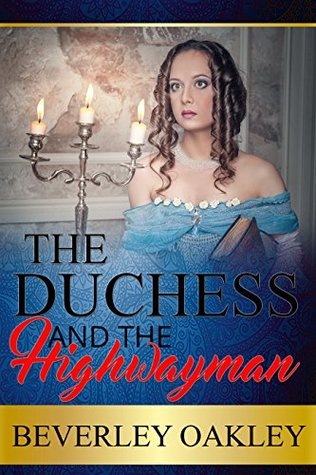 A duchess disguised as a lady’s maid; a gentleman parading as a highwayman.
She’s on the run from a murderer, he’s in pursuit of one…

In a remote Norfolk manor, Phoebe, Lady Cavanaugh is wrongfully accused by her servants of her brutal husband’s murder.

There’s little sympathy in the district for the duchess who’s taken a lover and made clear she despised her husband. The local magistrate has also vowed revenge since Lady Cavanaugh rebuffed his advances.

When Phoebe is discovered in the forest wearing only a chemise stained with the blood of her murdered husband, she persuades the noble ‘highwayman’ who rescues her that she is Lady Cavanaugh’s maidservant.

Hugh Redding has his own reasons for hunting down the man who would have Phoebe tried and hanged for murder. He plans to turn ‘the maidservant with aspirations above her station' into the 'lady' who might testify against the very villain who would see Phoebe dead.

But despite the fierce attraction between Phoebe and the 'highwayman', Phoebe is not in a position to admit she's the 'murderous duchess' hunted across the land.

Seizing an opportunity to strike at the social and financial standing of the man who has profited by her distress, Phoebe is drawn into a dangerous intrigue.

But when disaster strikes, she fears Hugh will lack the sympathy or understanding of her unusual predicament to even want to save her a second time.

Phoebe, Lady Cavanaugh, is on the run, fleeing evil Wentworth, the man who would frame her for the murder of her husband. Now she’s found temporary sanctuary with the highwayman who’s just held up the carriage she’d stolen from Wentworth.

Dipping the sponge into the water and wringing it out, Phoebe looked about her for the usual accoutrements that made bathing a pleasure. The bath salts? The scented oils? And that piece of rag… was that supposed to be the linen she dried herself with? It looked more like something the scullery maid would use to scour the bottom of the cooking pot.

She stood up, allowing the water to drip all over the floor while fear flooded her anew. What was she doing here? In a strange man’s house?

And why, oh why, had she used her christian name? She let the sea sponge fall into the water and put her hands to her face. There was little danger of Mr Redding associating her with the supposedly guilty Lady Cavanaugh but what were Phoebe options? Where could she go? She had nowhere but here.

The shock seemed to be abating but in its place came the familiar misery overlaid with panic. She balled her fists before bending to steady herself on the side of the tub as she closed her eyes. She could not let fear and despair get the better of her. She knew how to hold them at bay. Years of living with Ulrick and then suffering at the hands of Wentworth following the truth of her girlish delusions had forced her to develop ways to cope and survive. Now it was even more important to stay strong.

Her first priority would be to maintain the fiction of her identity and then flee to the safety of her aunt’s cottage in remote Norfolk. Of course, she couldn’t stay there. Her aunt would not welcome her for more than a duty visit and nor did she have the means to support another mouth to feed – or two. If Phoebe were with child – oh lord, it would buy her the time she needed to bring a case against Wentworth – she would be spared the hangman’s noose, for now. Wentworth would do all he could to condemn her but if she were seen to be carrying Ulrick’s heir she’d have time she might not otherwise have had to build up her own case regarding her innocence.

She clenched her hands at her sides and took a deep breath. By God but Wentworth would pay for his treachery. Ulrick had not been a kind husband and Phoebe would not pine in widow’s weeds, but he did not deserve to die at the hand of a dagger. No, not even a dagger. A paper knife wielded by his cousin.

She reached for the rough piece of linen as she stepped out of the bathtub and onto the hearthrug, soft and welcoming beneath her feet.

It was some consolation that this handsome gentleman hated Wentworth with a similar passion. Phoebe had no idea of the nature of Mr Redding’s grievance and while the gentleman upheld such a low opinion of Lady Cavanaugh she could not reveal her identity. But the realisation of how the common folk spoke of her made her sick to the stomach.

Still, this man offered her the greatest chance of escape from the rough justice that Wentworth no doubt had in mind for her.

She shuddered – this time in disgust rather than fear - as she picked up the voluminous garments she was lucky enough to be loaned to replace her blood-stained chemise. They were an abomination but nothing compared to the knowledge that Mr Redding thought the mistress of Blinley Hall a harlot and in all likelihood in collaboration with Wentworth. She’d have to tread a fine line to see how it were possible to save her neck through working the situation – and Hugh Redding – to her advantage.

Goodreads ** Amazon** All other buy links

About the author:
Beverley Oakley was seventeen when she bundled up her first her 500+ page romance and sent it to a publisher. Unfortunately drowning her heroine on the last page was apparently not in line with the expectations of romance readers so Beverley became a journalist.

Twenty-six years later Beverley was delighted to receive her first publishing contract from Robert Hale (UK) for a romance in which she ensured her heroine was saved from drowning in the icy North Sea.

Since 2009 Beverley has written more than thirteen historical romances, mostly set in England during the early nineteenth century. Mystery, intrigue and adventure spill from their pages and if she can pull off a thrilling race to save someone’s honour – or a worthy damsel from the noose – it’s time to celebrate with a good single malt Scotch.

Thank you so much for sharing The Duchess and the Highwayman :)