dark, gritty and too disturbing to put down - Escape (Lake of Sins #1) by L.S. O'Dea

“A dark, fantasy series with an OMG plot twist that you don’t see coming.” J. Urbanczyk 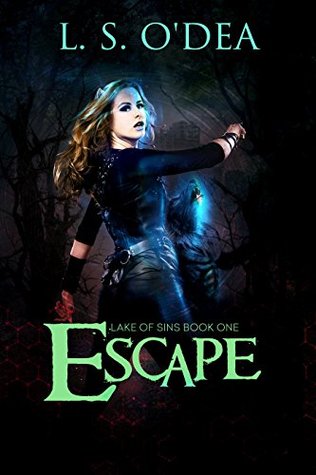 Only the best are chosen to breed.

The rest are loaded onto carts and taken away from the encampment. Never to be seen again.

Trinity has one week to escape into the forest and discover the fate of her kind.

Dive into the Lake of Sins and discover a world filled with human-animal hybrids where predators are friends and monsters aren't nearly as scary as those who create them.

The YA, dark fantasy series people are calling dark, gritty and too disturbing to put down.

Characters are not my problem; they are more my gift. If you read any of my books, you’ll understand what I mean. Most people, after reading my books, feel that they know my characters – really know them. I’ve had a few say that they expect them to show up in the real world—around a corner, in a store (this personally scares me a little because many of my characters are quite violent 😊).

So, developing characters is also not a problem for me. I just slip into their head (or they take over mine) and let them lead the way. Sometimes, it’s hard to believe that they come from me, my brain. I mean, I know they do, but then again, maybe not. Maybe, my brain is a portal to another world and the characters just pop in and take over for a while.

Who knows. I may be in the loony bin one day because of these beliefs – or it could be another story. I especially find it hard to believe they come from me when they do things that I’d never expect.

Take Christian the River-Man for example. He was born of necessity. I had Trinity wandering through the woods and something had to happen or it’d be boring. So, I create Christian. He was supposed to be just a glimpse into the creepy world that Trinity found herself in, but instead he became a very important secondary character (and the main character of his own novella, Conguise Chronicles: Rise of the River-Man).

Two more examples are Mirra and Gaar. They were originally a German Shephard (Mirra) and security guard (Gaar). How they became creatures that have never before existed in any genre I don’t really know.

Perhaps, I’ve had an issue with committing to the fact that I create the characters I don’t really create them any more than parents create a child. Biologically, the parents create the child and they help to form that kid into (hopefully) a valuable member of society, but they are not considered the child’s creator. Creator has a more controlling connotation as if the creator is in charge of every aspect of his/her creations.

I’m comfortable with saying that I create my characters in the same sense that parents create a child. I give them life and try to help guide them, but the life they choose to lead is up to them. Sometimes, I find that quite frightening.

About the author:
L. S. O’Dea grew up the youngest of seven in a family that uses teasing and tricks as an indication of love (or at least that’s what she tells herself). Being five years younger than her closest sibling often made her the unwilling entertainment for her brothers and sisters.

Before she started kindergarten her brothers taught her how to spell her first and middle name—Linda Sue. She was so proud she ran into the kitchen to tell her mother. She stood tall and recited the letters of her name: L-E-M-O-N H-E-A-D.

Perhaps, she has her siblings to thank for the demons that whisper through her mind and help to create these dark and demented stories.