a labyrinth of leads - Crime and Catnip (Nick and Nora Mysteries #3) by T.C. LoTempio

"I love this series and each new story quickly becomes my favorite. There is a cliffhanger at the end that leaves me so excited for the next story to be released. Should be out in November or December of 2017. A whole year…I don’t like it but I can make it because I know good things come to those who wait." - Lori, Goodreads 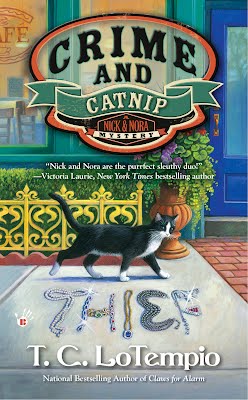 While catering a gala for the Cruz Museum, Nora Charles agrees to look into the disappearance of director Violet Crenshaw’s niece, a case previously undertaken by her frisky feline friend Nick’s former owner, a private eye whose whereabouts are also currently unknown.

As Nora and her curious cat Nick pull at the string of clues, they begin to unravel a twisted tale of coded messages, theft, false identities, murder, and international espionage. Nora dares to hope that the labyrinth of leads will not only help them locate the missing young woman, but also solve the disappearance of the detective. That’s if Nora can stay alive long enough to find him...

GUEST POST
The Book Market Today – What are they looking for?

Four years ago my fondest dream was realized: my cozy mystery, MEOW IF IT’S MURDER, was accepted for publication by Penguin. Since that happy day, however, the world of publishing has changed big time. Publishers are being undercut by e-books, self-published authors, and hundreds of newly minted small presses. Understandably, that’s meant a considerable amount of belt-tightening. Today’s editors no longer edit, but are tasked with finding new authors with new material. Which means what, exactly?

The answer is they’re on the hunt for the next big thing. That usually means a great story with memorable, dynamic characters, breakout books that are cutting edge and different. So what can an author do to increase their chances of getting their “baby” accepted for publication? Here are some tips:

#1: Look at the categories:
The mystery, thriller, and romance categories are holding strong. And a new sub-category – what publishers call “the domestic thriller,” is doing very well. If you’ve written a vampire or zombie book it’s going to be a tough sell, but editors are still looking for good Young Adult books and Children’s picture books.

#2: Good Representation:
Finding an agent – and a reputable one – has oft been compared to finding a needle in a haystack, but it isn’t impossible! The best thing to do is home in on three or four reputable agents that represent work in your category. Then you’ve got to submit a whiz-bang query letter that immediately nips at their interest. You can find good samples online.

#3: Submit a Finished Product
The days of winning a book contract on just a few chapters or an outline are gonzo, unless you’re a well established author. Today’s tougher, leaner market means authors must write and submit a Finished Manuscript. Also, you should look at how your story relates to what’s already out there in the marketplace. For example, if there are already forty-nine knitting mystery series and you're pitching the fiftieth, it could be a tough sell. You also need to make sure your novel’s plot, pacing, turning points, character development, dialogue, and suspense is spot-on.

#4: Hook your Reader!
In today’s on-demand climate, it’s critical to establish an opening story hook immediately. Agents and editors don’t want pages and pages of build-up, they want you to toss your reader directly into the action.

Of course, there is no tried and true formula and all of the above should be sprinkled with a dash of good luck!

About the author:
While Toni Lotempio does not commit – or solve – murders in real life, she has no trouble doing it on paper. Her lifelong love of mysteries began early on when she was introduced to her first Nancy Drew mystery at age 10 – The Secret in the Old Attic. She (and ROCCO, albeit he’s uncredited) pen the Nick and Nora mystery series from Berkley Prime Crime – and the just released Cat Rescue Mysteries from Crooked Lane! The first volume, Purr M for Murder is out now! She, Rocco and company make their home in Clifton, New Jersey, just twenty minutes from the Big Apple – New York. Catch up with them at: