"Fantasy and virtual reality and time travel, with a little twist of history and mythology, Kath Berryman’s novel, “Erinland”, is a compelling narrative of ninth century Norway and Ireland. The lush depiction of the Irish landscape and the detailed accounts of the powerful mythological beliefs that dominated the lives of the Irish and the Vikings, thread their own mysterious web of compassion, fear and riveting suspense." - Emily, Goodreads 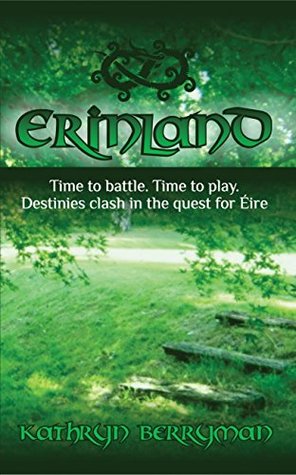 Two troubled young adults find themselves key players in a deadly game that spans the 21st century and the Viking Age.

Amy, finding it difficult to ‘fit in’, becomes increasingly obsessed with the virtual reality game Erinland.

The VR characters and the mist of Erin begin to invade Amy’s dreams and her waking moments. She finds herself drawn into Erinland in 9th century Ireland. Amy becomes part of this mystical world as she joins in the struggle to defeat the Viking raiders.

Richard has a complicated home life and feels he doesn’t belong anywhere. A series of events finds him desperate and living on the streets, where he finds himself dragged into 9th century Norway by a Viking warrior.

Richard finds acceptance with the Vikings and joins them on a colonisation raid to Ireland.


The druid looked steadily at Aidan. ‘I speak to you of this tale, I am sure you know why. The fish you have just eaten is the fabled Salmon of Knowledge. You are the chosen one. You are the Fionn of this generation. Whatever journey or burden you undertake will be lessened by the boundless knowledge you have absorbed. Just as Fionn gained his wisdom from the Salmon of Knowledge, so have you, holy man. So say the ancients, so it is.’

About the author:
Kathryn is a Sydney author whose interest in history and mythology was the catalyst for her debut novel Erinland to become a reality.

An adventure in the modern and ancient world, where the central characters seek acceptance and self-belief, the ‘players’ in Erinland find themselves in very different roles from their everyday life. Choices they make could mean the difference between life and death, with the consequences of these decisions reaching into their ‘real’ lives.

Written in the Fantasy genre, Book I bridges the ages, drawing on contemporary life and 9th Century history to create an authentic experience for the reader. A visual writer, she explores the mythologies of ancient Norway and Ireland, giving a tangible view of everyday life and the impact of the Gods in these two cultures.

Kathryn is married with three beautiful daughters. Amidst busy family life, she studied at University to become a Primary school teacher. When she is not teaching, she loves to write and dabble in other creative pursuits such as painting and drawing. She and her husband hope to realise their dream and move to the country one day – soon.

Congrats on the tour, the book sounds great, and thanks for the chance to win :)

This sounds like a very entertaining book! Can't wait to read it!

I live in a part of Ireland colonised by the Vikings so it'll be interesting to see how the fictional matches with the factual!

I always like time traveling books especially exciting times and places such as Ireland the the Vikings!

I like the book cover. I think that I will enjoy the characters and their story!