the kind of hometown they all need—but never knew they wanted…Slim Pickins' in Fat Chance, Texas by Celia Bonaduce

To win a cash bequest, each was required to spend six months in the ghost town to see if they could transform it—and themselves—into something extraordinary. But by the time pastry chef Fernando Cruz arrives, several members of the original gang have already skedaddled…


It’s been a year since an eccentric billionaire summoned seven strangers to the dilapidated, postage stamp-sized town of Fat Chance, Texas. To win a cash bequest, each was required to spend six months in the ghost town to see if they could transform it—and themselves—into something extraordinary. But by the time pastry chef Fernando Cruz arrives, several members of the original gang have already skedaddled…

Fernando’s hopes of starting a new life in Fat Chance are dashed when the town’s handful of ragtag residents—and a mysterious low-flying plane—show him just how weird the place actually is. His hopes of making over the town’s sole café into a BBQ restaurant for nearby ranchers threaten to turn to dust as a string of bizarre secrets are revealed.

But just when the pickins’ couldn’t get any slimmer, the citizens of Fat Chance realize they might be able to build exactly the kind of hometown they all need—but never knew they wanted… 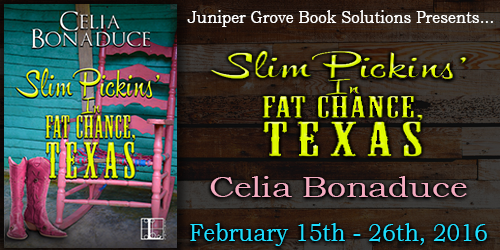 Dymphna didn’t want Suzanna – or Suzanna’s sister Erinn, or their mother Virginia – worrying about her, so she tended to embellish how well things were going in town when she spoke to them. No harm done, until Suzanna sent an email to Dymphna, letting her know that the fabulous Fernando had sold his share of the B&B to his partner and was looking for a new place. Suzanna thought Fat Chance sounded like a ground floor opportunity and Fernando was very excited about checking it out. Without admitting to a pack of white lies, Dymphna convinced herself that he might actually like the place.

Fernando, Dymphna and Pappy turned towards the door as Thud, the enormous bloodhound that shared Dymphna’s farm, bounded into the room. Thud sensed the new blood and raced to welcome Fernando to town. The dog reared back, then jumped. He put his front paws on Fernando’s shoulders, knocking the chair over. Fernando and Thud landed on the floor, the dog looming over the man. Drool ensued. Dymphna hoped Fernando found this charming, but suspected by Fernando’s involuntary yowling that he was not a dog person.

Dymphna pulled the dog off him and Pappy righted his chair. Fernando wiped the dog slobber from his face, this time stuffing his no longer white handkerchief into his jeans.

“Tell him how great this place is, Pappy,” Dymphna said as she lugged Thud back outside.

“I won’t lie to you,” Pappy said, looking Fernando right in the eye. “Fat Chance is an acquired taste.”

They all thought of the place as a ghost town, but it was actually a study in “arrested decay.”  The structures had been maintained, but only to the extent that they would not be allowed to fall over or otherwise deteriorate in a major way. That explained why the town was a mishmash of buildings from the turn of the twentieth century with electricity, running water, a few 1950’s appliances – and a faint internet signal.

“I have to get up to the farm,” Dymphna said to Fernando, as they all stood in front of the café. “I’ve got to shear my goats. Do you want to come up?”

“Less than anything on earth,” Fernando said.

Dymphna hesitated, but realized there was nothing she could say or do to make Fernando decide to stay. She and Thud headed up to the farm, the two men watching them until they were two small specks on the horizon. The speck that was Thud bounced all the way up the hill.

“Who maintained the buildings all these years?’ Fernando asked.

“I have,” Pappy said proudly. “Been here for more years than I can remember.”
“Why?” Fernando asked. “Why have you been here so long?”

“Oh, I doubt that,” Fernando said.

“You might not stay,” Pappy shrugged. “But you could have gone anywhere. Back to Napa or Los Angeles. You could have gone to Chicago or New York. But you decided to check out Fat Chance. Not business as usual, you got to admit that. You were looking for something different. And you found it.”

Celia Bonaduce is an award-winning producer whose credits cover a lot of ground – everything from field-producing ABC’s Extreme Makeover: Home Edition to writing for many of Nickelodeon’s animated series, including Hey, Arnold and Chalkzone. If Celia Bonaduce’s last name is any indication, she is proof that TV talent runs in the family.

Sounds like a great book, thank you for the chance to win