an agreement called: The Balance by Michael Selden

"There is a little something for everyone with science, suspense, and even a bit of romance. [...] The story is well put together with skillful writing and believable characters. The ending was so intense that I was on pins and needles with the imminent danger awaiting Phoebe. Kudos to the author for another well written captivating read." - Goodreads, Stacie

This is the first of a planned 3-volume story—one story spanning the 3 books. The remaining volumes are planned to be completed after I publish 2 other books over the next 2 years. They are plotted, but not written yet.

Phoebe lives in a harbor town with her adopted father, Daniel. It’s been 200 years since the apocalypse, and the Land is ruled by the Council of God: a heavy-handed theocracy.

Phoebe doesn’t know why she’s plagued by thoughts, images, and feelings from the people around her. For her, it’s a constant battle just to survive the chaos they bring, and to hide her strangeness from the Council. In fact she’s the unwitting product of a genetic engineering program run by the Order, an organization driven into hiding almost 18 years before the story begins.

The Balance is Phoebe’s story, and the first installment about the Order’s struggle to return from exile, to bring the technologies of the past, and to rekindle the agreement reached with the Council after the war’s destruction—an agreement called The Balance.

It was difficult to tell what color the walls might originally have been. Every available surface was covered with pictures— charcoal and pencil drawings, watercolor and oil paintings. They hung without apparent plan or order, and the pages were many layers deep in most places. Each morning her eyes sought out these familiar images—reminders of a thousand nights of terror.

But for Phoebe they were strangely comforting, a record of the many things she’d survived.

Her father, Daniel, was asleep in the old rocking chair near the window, his head rested on his chest, and he was snoring softly. The sound of his breathing had let her know he was there through the night, and helped her sleep again. Daniel had come when he’d heard her screaming—just as he always had.

The rocker stood sentry in a triangular niche attached to the east side of the room, where the walls came together in an unusual mixture of oblique and sharp angles. To Phoebe, the area had always seemed an afterthought, an eccentricity added to an otherwise normal space. She thought that it made for an odd room and was well suited for her—an odd room for an odd girl. 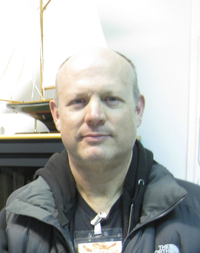 I've lived or worked all over the world at one time or another and spent almost 30 years as a physicist doing research and development, both for science and for specific applications. I wound up returning to the Pikes Peak region of Colorado, where I went to high school, to write books.

I live in Woodland Park, Colorado now, at an 8500 ft. elevation. My house is on the edge of Pike National Forest and all sorts of animals visit my house every day, from squirrels to deer, to bears, and foxes, and raccoons and -- well, there are animal reserves nearby.

I like to read about and to create new worlds, new stories and interesting characters. Now that I no longer spend all of my time on developing new technology, I get to do what I've always wanted to do.

Hello to Michael who lives in the same state as my grandparents lived. They lived in such a small town, I'm not sure you'd know it, lol My grandmother always complained about the deer eating her strawberries :) I liked the excerpt and would love to start this series. I'm glad to be starting at the beginning of it and hope to see more soon :)

Hi Michael! Your book looks great. Thanks for the giveaway and the post!