an endless struggle - Champions: At Fire's End by Charlotte Jain

Seventeen-year-old best friends, April and Kyle, are thrown into the final battle of the Titan and Olympian war. Locked into an endless struggle, the Immortals have finally reached a solution - bestow mortal Champions with control over the elements to wage their final campaign. 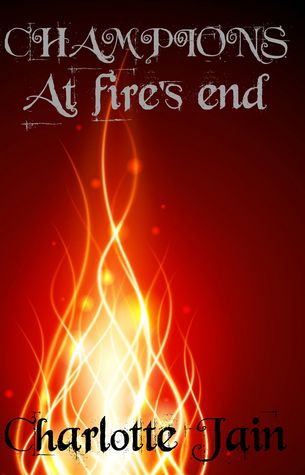 Seventeen-year-old best friends, April and Kyle, are thrown into the final battle of the Titan and Olympian war. Locked into an endless struggle, the Immortals have finally reached a solution - bestow mortal Champions with control over the elements to wage their final campaign.

Bestowed with control over fire and water, April and Kyle were raised by Immortals with a single purpose - win the war. After finally uncovering the remaining Champions' identities, April and Kyle must launch themselves into their final battle for survival. Winner takes all. But the Immortals are growing restless, and time is running out.

A shiver ran down my spine as sudden rustling reached my ears from the bushes behind me.
“Keep watching. The girl.”
Laughter broke out over the peaceful silence. A girl with rich tanned skin bounced through her home’s white front door, taking her bag and mobile phone as she went.
And then there it was. It happened so fast that if I’d blinked, I would have missed it. While skipping merrily through the bright morning sunlight across crisp pavement, her friend close at her heels, the girl clipped back her short brown hair. Delicate hairpins twinkled through the air, moving effortlessly to hold her fringe from her eyes. She didn’t glance to the hairpins. But she didn’t touch them, either. A twitch of her finger, that was all. And that was all I needed to see. Finally, we had found our adversary.
“I told you I’d found one of the Champions.” Kyle’s voice caught my thoughts. Compassion from earlier had vanished, replaced with the calculating, logical Kyle that I remembered.
“Looks like we might have it a bit easier than we thought.”
“I wouldn’t say seventeen years of hunting across the globe was easy,” he replied.
Kyle threw his half-eaten apple over one shoulder into the foliage from which he had appeared. After picking up on my indignant stare, he added with a shrug. “Apple tree.”
I felt a small grin cross my features, turning my focus onto reaching out to Kyle’s mind, ready to try a new trick. “Kyle,” my gaze locked on his. “Pick up the apple core, and plant it in your garden.”
His expression became washed with momentary vacancy. “Yeah, my bad,” he responded, monotone. Robotic, he turned and walked behind the bush, picked up the apple core and stuffed it into his pocket. “I’ll plant it in my garden.”
Clarity returned to his eyes, seemingly unaware of the catalyst for his noble actions, and the half eaten apple now residing in his pocket.
“We can do this,” I pressed. “Our entire lives, all our sacrifices, have led here. And we’re so close.”
“Yeah. Yeah we are…”
“I’m sorry it has to be her.”
A hint of desperation tinted Kyle’s response.
“I really like this girl, April.”


“I understand,” I didn’t, but sincerity masked my shock, unsure that Kyle was capable of caring for anyone but himself. “But it’s us or them. And I won’t let you disappear.”
TOUR SCHEDULE
Goodreads ** Amazon ** The Book Depository

About the author:
Charlotte Jain is an Arts graduate from Melbourne and the author of the Champions series. When not scrawling exciting YA tales filled with magic and adventure, Charlotte enjoys travelling the world and snuggling up on the couch watching movies.