an impossible journey through Hell - The Warrior Prophet by Lisa Voisin

She can see angels. She also sees demons. Everywhere.
The angels are preparing for war to get her fallen angel boyfriend, Michael, back. A war that could take years. 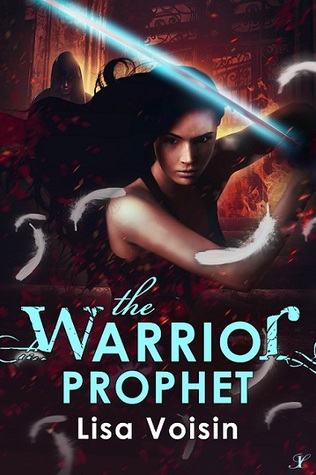 Mia Crawford is a prophet.

She can see angels. She also sees demons. Everywhere.

The angels are preparing for war to get her fallen angel boyfriend, Michael, back. A war that could take years.

Haunted by visions of Michael’s soul being tortured, Mia can’t rest until she knows he’s safe.

To save him, she must make an impossible journey through Hell with the one person she prayed she’d never see again.

While the angels battled outside, a ghoulish female demon pounded a crack in the protective structure around Michael’s hospital room with her fist. Her long, stringy black hair whipped over her face with each blow. She struck and struck until she hit the perfect angle. The structure cracked.

Her eyes glowed red and her skin was the color of black polished granite, wet with black slime. With a tearing sound, like ripping silk, the crevice grew. Her form as ragged and filmy as liquid smoke, she slipped into the crevice and poured herself through. I struggled to make a sigil of my own and managed to make the first cone. By the second, she was in my face. Her cold, dead stare mesmerized me and her shrieking pierced my eardrums. But when she reached a bony arm for Michael, I reconnected to the network and ignited the room, throwing her beyond my reach.

She picked herself up and circled the outer edges of my halo, inching closer to test it. I dropped Michael’s chart on the bedside table and flared my energy out further. My halo wasn’t as big or bright as when Michael and I had been connected, but I could hold her off. I had to.

A Canadian-born author, Lisa Voisin spent her childhood daydreaming and making up stories, but it was her love of reading and writing in her teens that drew her to Young Adult fiction.

Lisa is a technical writer, a meditation teacher, and the leader of the Lynn Valley Literary Society’s Young Writer’s Club, a writing group for teens. A self-proclaimed coffee lover, she can usually be found writing in a local café. When she's not writing, you'll find her meditating or hiking in the mountains.

Though she’s lived in several cities across Canada, she currently lives in Vancouver, B.C. with her fiancé and their two cats.
More about Lisa can be found on her:

I loved Lisa other two books!! I did not know about this one, im thrilled to pick it up :) Thanks for the post.

It would be great to win a $25 Amazon gift card.
The Warrior Prophet by Lisa Voisin
sounds like a book i would enjoy reading.
I hadn't heard of this series until now
but i am going to check out the other books.
Thank you for having this giveaway.

I guess demons come with the package, not that the angels sound like any prize necessarily.

Love this book cover! Thank you for the giveaway. :)

sounds like a great read, thanks for the chance