A monster roams the halls - The Requiem Red by Brynn Chapman

"Brynn Chapman's Boneseeker was the start of my love for all things Brynn Chapman. Then came The Violet Hour, and now The Requiem Red. Brynn's talent continues to grow, and each book leaves me more breathless. They are each so very different from one another, but one thing always shines through. This lady knows how to write an amazing story! I am hooked!" - Goodreads, Jaime

A monster roams the halls of Soothing Hills Asylum. Three girls dead. 29 is endowed with the curse…or gift of perception. She hears messages in music, sees lyrics in paintings. And the corn. A lifetime asylum resident, the orchestral corn music is the only constant in her life.

Mason, a new, kind orderly, sees 29 as a woman, not a lunatic. And as his belief in her grows, so does her self- confidence. That perhaps she might escape, might see the outside world.

But the monster has other plans. The missing girl's share one common thread...each was twenty-nine's cell mate.

Will she be next?
GUEST POST
Inspiration for The Requiem Red

As a YA history-fantasy novelist, typically a place or an incident which will spark an entire book, sometimes an entire series. This is what occurred as I toured and researched 19th century asylums.

As I am in medicine by day, my particular profession necessitated I do an internship rotation in psych, as well as a minor in college. I love neuroscience and the history of medicine, so they often appear rolled into one, in my books.

In its prime Weston State Hospital was 666 acres. Other Kirkbride Buildings have been large enough to warrant their own zip code. These establishments were designed to be self –sufficient—with their own dairy farms, ice plants, oil and gas wells, coal mines and even a morgue and cemetery. Many residents, once placed in a home, never saw family again, not even after notice of their deaths.

It was no great feat to create my character Jane’s desperation, loneliness and her fervent desire to escape—by any means necessary.

The Trans-Allegheny is vast—its walls were carved with the aid of Irish Immigrants, stone masons imported to help craft the colossal building. 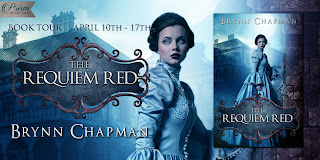 Born and raised in western Pennsylvania, Brynn Chapman is the daughter of two teachers. Her writing reflects her passions: science, history and love—not necessarily in that order. In real life, the geek gene runs strong in her family, as does the Asperger’s syndrome. Her writing reflects her experience as a pediatric therapist and her interactions with society’s downtrodden. In fiction, she’s a strong believer in underdogs and happily-ever-afters. She also writes non-fiction and lectures on the subjects of autism and sensory integration and is a medical contributor to online journal The Age of Autism.

Sounds awesome! Will plug this page, book, and giveaway on my blog on Fri 15th.

Thanks for the giveaway!!!

I found it interesting that you said you toured and researched 19th century asylums, then went on to say that Weston State Hospital was 666 acres. Ironic since 666 is a number associated with 'unnatural' spirits and occurrences :) My college degree is in Mental Health so I'm familiar with state hospitals. I am buying this book as soon as I can :)

sorry i missed these comments during the tour--lexa-thank you for the giveaway on your blog, beppe--waves!! youre a familiar face! and jan--it was a fascinating, sad place. Full of stories