Rebellious, Scandalous and Irredeemable - The Trouble With Seduction by Victoria Hanlen

Sarah, Lady Strathford is ready for a little harmless frivolity with a man of her own age and her own appetites…surely that’s not too much to ask! After the death of her beloved husband years before Sarah is ready for an adventure… Enter the dashing, roguish – and baffling – Mr Cornelius Ravenhill. 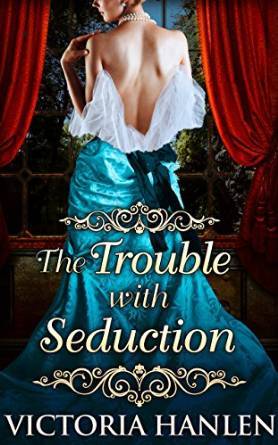 Sarah, Lady Strathford is ready for a little harmless frivolity with a man of her own age and her own appetites…surely that’s not too much to ask! After the death of her beloved husband years before Sarah is ready for an adventure… Enter the dashing, roguish – and baffling – Mr Cornelius Ravenhill.

Ravenhill, however, is not the gentleman he seems, and soon Sarah finds herself battling against the corrupt and harsh world around her as it threatens to destroy all she holds dear. The question is, will her seduction at the hands of Mr Ravenhill prove to be her saviour or her downfall?

EXCERPT
"This excerpt is from an unedited ARC and there may be small changes in the final book."

“I have a favor to ask, Amelia.” Sarah rolled her cigar between her fingers. “It has come to my attention that perhaps someone connected to Edward’s accident was at your party a few weeks ago. Would it be possible for you to make a list of all present? And could you please include the servants and anyone else who might have arrived late, guest or not.”

“I’m not sure. It’s for an acquaintance who thought they briefly saw someone there.”

Amelia’s face lit up. “This is all so mysterious. Who is this acquaintance?”

Sarah bit her lower lip and tasted rich Cuban tobacco. Yesterday’s image of Mr. Ravenhill in his revealing work smock appeared in her mind. She probably should have nothing more to do with him. Handsome males had always brought trouble. The very first boy she’d admired had teased her into breaking her leg. Its weakness would probably forever plague her.

She shouldn’t reveal he was the one who wanted the list, but she hated lying, and especially to her friends. “This acquaintance believes they have found a connection between the fire that killed Edward and the men who attacked…him.”

Calista’s dimple twitched, and she shoved her cigar into her mouth.

Sarah wanted to make herself very small and slink away. This was exactly what she’d been afraid of, and these were her friends. She and Ravenhill were such a chestnut – a wealthy widow befriending a handsome rake, the younger son of a peer. “You purposely misunderstand the situation. There is nothing between us and that is the way it will stay.”

Award winning, historical romance author, VICTORIA HANLEN, has worked at a wide range of jobs, from fashion, to corporate business, to treading the boards of stage and professional opera. A lifelong writer, she once put her skills to use in PR and advertising. But her favorite form of writing is stories with happily ever afters. Her first book, The Trouble With Misbehaving, was published in February 2016. Victoria and her husband live in rural New England surrounded by a host of wildlife.
She enjoys hearing from readers at:

Thank you for the chance .

Thank you for hosting!!
:) Victoria

You're welcome Esther! And best of Luck!! :)

thanks for the chance to win

I like the excerpt for the book! I hope that it is a big success!

You're welcome, Jolanda. Best of Luck to you.
:) Victoria

You're welcome, Gregory. Thank you for stopping by Mythical Books for my book blast. And best of luck!
:) Victoria

Thank you Bridgett. I hope Damen and Sarah entertain you!
:) Victoria

You're welcome, Tammy. Thanks for stopping by The Trouble With Seduction book blast and best of luck!
:) Victoria

You're welcome, Beppe! Thank you for stopping by Mythical Books for The Trouble With Seduction book blast and best of luck in the contest!
:) Victoria

You're welcome, Danielle. Thank you for stopping by The Trouble With Seduction Book Blast and good luck in the contest!!
:) Victoria

I'm so glad you like the excerpt, Dan, and I really appreciate the good wishes!
:) Victoria

Was it popular for women to have cigars back in the day of this book? Just curious, as in today's society, it's not popular but it's not as frowned upon as it used to be.:)