An Eye for an Eye by L.D. Beyer

"Here is an author that is defiantly on my “Looking out for the next book” list. [...] It’s one of those fast pacing books. Pure enjoyment. That’s what books are for. Isn’t it!?" - Goodreads, Jacob

A Powerful Drug Lord Threatens To Bring America To Its Knees.
Only One Man Can Stop Him.

Two years ago, Secret Service Agent Matthew Richter faced the most difficult decision of his life, knowing that by saving the former, the latter would die. In the aftermath, he fled Washington and the agency that failed him. With wounds he’s certain will never heal, he seeks refuge behind a gun as the commander of an FBI SWAT team in New York. After a raid turns sour and Richter is sidelined, possibly for good, he is reluctantly drawn back to Washington by the man he once saved.

When drug cartels threaten to topple the Mexican government and the violence begins to spill across the border, Richter tells President David Kendall it’s time to take off the gloves. One by one, cartel warehouses and tunnels are raided and their drug caches destroyed. One by one, their sprawling compounds and bank accounts are seized. One by one, drug lords are targeted and killed. One by one—all except, that is, for Pablo Guerrero, the ruthless head of the Sangre Negras cartel, who has only grown stronger as others have fallen.

When the hunt for Guerrero finally draws first blood, he unleashes a war no one is prepared for. Now Richter must stop him before it’s too late. 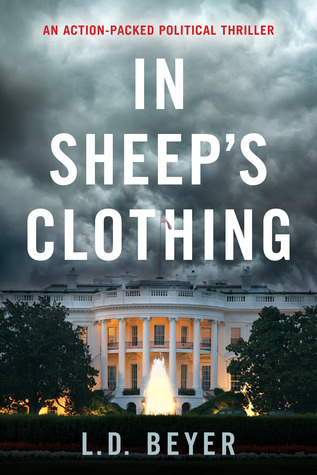 An Eye For An Eye is the action-packed sequel to In Sheep’s Clothing, L.D. Beyer’s gripping debut novel.

Caught in a game of chess he didn’t know he was playing until it was too late, the President makes the only move he can, plunging Washington and the nation into chaos. Stunned and reeling, Vice President David Kendall takes the oath of office and tries to heal a nation in mourning. But what the new president doesn’t realize is that things in the White House aren’t always what they appear to be, and sometimes what looks like the best option may turn out to be the worst. When one fatal decision triggers consequences he never envisioned, President Kendall finds himself caught up in the same game that cost his predecessor his life.

Although there was nothing he could have done, Secret Service Agent Matthew Richter is haunted by the death of the man he had vowed to protect. When his girlfriend dumps him and his boss tells him that his job is on the line, he thinks his life cannot get any worse. He soon realizes how wrong he is when he finds himself fighting to save another president from the deadly forces that he has unwittingly unleashed.

This new release by L.D. Beyer is a fast-paced, action-packed political thriller that will leave you on the edge of your seat.
TOUR SCHEDULE
Goodreads ** Amazon ** Barnes&Noble

L.D. Beyer spent over twenty-five years in the corporate world, climbing the proverbial corporate ladder. This meant a lot of time away from his family, extensive travel, a half dozen relocations, and the opportunity to live and work in Mexico for several years. In 2011 he decided it was time for a change—he was tired of moving every few years, he wanted to spend more time with his family and he wanted to chase his dream of being a writer. LD Beyer is an avid reader and although he primarily reads Thrillers, his reading list is somewhat eclectic. He believes a few hours with a good book beats a few hours in front of the TV any day. LD Beyer lives in Michigan with his wife, three children and a dog named Tope (pronounced Toe-Pay), which he adopted in Mexico. He enjoys cooking, hiking, biking, working out and fixing just about anything that breaks in the house. With 3 kids, a dog and an aging house, he always seems to be fixing something!