"There was so much packed into this one book. Drama, excitement, bad decisions..... I felt that all four characters developed at a good speed. The story played out well. This is so much more than a romance between the two lovers. [...] This is a very excellent read."- Goodreads, Fawn 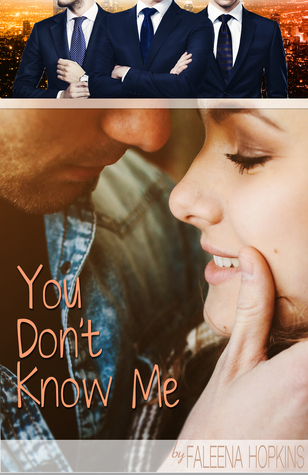 An orphan and aspiring dancer learns her father wasn’t who she thought, when she inherits $50 million dollars, and two difficult brothers she never knew she had. Can their rockstar best friend Alec stand up for her... and can he change her mind about wanting to be alone?

It’s funny, this book was inspired by a photo I found when I was searching for the new cover to one of my other books. I was scanning hundreds of images on Shutterstock.com and came across this redhead with three guys flocking her, all ready for a night on the town and all from an elite world…only she looked scared.

That gave birth to the idea of what it would be like to be thrust into an elite world you know nothing about, where cameras flash pictures of you soon to be displayed on the covers of magazines. Where money is not an object, and yet there is still a price to pay. And were you — as Rue has — to inherit money from a father you didn’t know you had, the spawn of an illicit affair, to have to face the “real children” he had with his wife. They’d be pissed. They’d wonder who the hell you are. And the world would, too. So I dove into the story as soon as the book I’d been working on was complete, and it unraveled into “Stand Close” which I’d written under my pen name, and have since republished it under my own now that I’ve come out of the steamy romance writing closet.

Funny story…the epilogue wasn’t what it is now until one of my read and review team of fans told me “This doesn’t sound like you.” I re-read what I’d sent out and agreed with her, and took another pass at it, coming up with what you read there now. I looooooove the epilogue, and it was all because of a fan helping me be true to my voice when I couldn’t see I wasn’t being. Inspiration comes from everywhere. You just have to listen when it whispers, or when it yells.

“I’ve written books since age five or six when I first sold a crayon-illustrated short story to my parents for a dollar.”

Faleena Hopkins is drawn to telling stories of love or redemption, and often both. Hiding behind the pen name “Sabrina Lacey” when she began writing, Faleena now publishes only under her own name.

She’s an actress and director, too, and currently lives in Atlanta, GA, with her crazy-cute dog, Pippin. Learn more about her filmmaking career at FaleenaHopkins

I really liked the book description and am looking forward to reading more about the book.

With $50 million I think you could arrange to be left alone if you REALLY wanted it...

Love the book art! So pretty. :) Thank you for the share.

Love the sound of the book. Will plug this page, book and giveaway on my blog on Fri 15th.

Nice to have a new contemporary romance to read :) Thank you!

So many Books so little Time to read! You guys have plenty of books. I appreciate the chance to win Amazon gift cards so thank you.

That's really interesting to know how you changed the epilogue after feedback from someone. You're right - you have to keep your ears open, you never know when inspiration will be calling your name.

I really like the Blurb sounds right up my alley, I love Friends to more kinda book

I enjoyed reading the guest post and learning about this book. This book sounds like such a fun, exciting, interesting, and intriguing read! Also, I really like the book cover! Very enticing and alluring! Totally can't wait to read this book!