How I Ruined My Life by T. L. Bainter

The two are fast friends, but Kyle isn’t sure if that’s a good thing or not. While some of the experiences resulting from their friendship are grand, many other experiences leave Kyle broken, angry, and depressed. 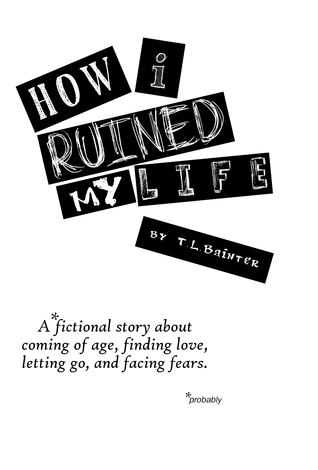 Kyle has gone unnoticed for the vast majority of his life and he’s always preferred it that way. Homeschooled, shy, and only attending church because he’s forced to, there’s not really anything outstanding or interesting about him. That changes, however, when he meets James Porter.

The two are fast friends, but Kyle isn’t sure if that’s a good thing or not. While some of the experiences resulting from their friendship are grand, many other experiences leave Kyle broken, angry, and depressed.

Is Kyle’s friendship with James really such a good thing, or would he have been better off if he’d simply remained the quiet, lonely boy that no one seemed to notice?

Death has become a cliche for storytellers and readers (or viewers!) everywhere. It no longer has the same punch that it used to have because character deaths have been reduced to shock value. They’re only good for the one or two paragraphs devoted to them and then they become meaningless. Some readers even cite being more annoyed than heartbroken at the deaths of some of their favorite characters.

While it has become a cliche, death is still a vital part of storytelling and always will be. Death is part of life, and while it doesn’t have a place in every story, there are times when it is necessary and potentially beneficial. So how can we as storytellers utilize death in a way that moves the story forward rather than reducing it to another cliche novel that goes unfinished? Here are three tips that I’ve found to be of great use in this area:

This might seem obvious, but many writers - including myself - have fallen short in this area. The death only matters while it’s happening, maybe for a few pages after. This is how you know that the death was only there to shock the audience rather than to advance the story. A character’s death should have a rippling effect that impacts the lives of your living characters for more than just a few paragraphs. You want your reader to think “how would this story be different if X were still alive” or “If X were still alive, he/she could get these characters out of this situation”. For a death to be more than just a brief moment of dismay, it needs to have a lasting effect on your story.

Tip #2: Lay the Groundwork
If you want your character death to have an impact, you need to lay the groundwork beforehand. This doesn’t always mean foreshadowing (although that can certainly help), but leans more toward maintaining and improving the relationships with the characters that will later be affected by the death. Maybe your disgruntled, soon-to-be-killed character softens a bit after establishing a father-son relationship with another character, or maybe your character has been developing from anti-hero to genuine hero, only to die before the character arc is complete. Whatever the case may be, you need to start setting up the impact of the death before the death actually happens.

Tip #3: This Character Can’t Die Because...
Have you ever found yourself reading a book and thinking “well this character can’t die because…”? It makes you complacent. The story seems to depend on that one character, and therefore the author won’t kill him/her off. Not only does the death of a character that seems vital to the story have genuine shock value, it completely changes the plot. The reader that had everything figured out is suddenly thrown into a tizzy, wondering how your story is going to end. Suddenly, Gandalf (for example) has vanished from their lives and there doesn’t seem to be a way to continue on. There’s no ending in sight without that character. That is the perfect death.

Those are my three tips for making an impactful, meaningful, emotional character death. Crafting the perfect death isn’t necessarily about the death itself, it’s about the groundwork and the aftermath; it’s about the characters that are impacted and the plot that’s upended. I hope that these tips will help you craft meaningful and powerful deaths in your writing - I know that they helped me with my novel, How I Ruined My Life.

T. L. Bainter was born in 1994 and began writing short stories not long after that. Since the age of six, he has been churning out short story after short story. After receiving an award from the renowned Writers of the Future competition for his short story Edwin, T. L. Bainter found the confidence and encouragement that he needed to write and publish his first novel: How I Ruined My Life.
Currently, he resides in Kansas City with his cat, Sooba.

Author's Giveaway
a Rafflecopter giveaway
Posted by CCAM at 9:37 PM