Their pick for Vince is sick of dancing to her mother’s tune, so she certainly won’t admit she finds her sensitive, playful neighbour sexy. However, she’d love to make him her pseudo-boyfriend to get MOM off her back.

Artist Vince Russo wants to advance his career but his devout mother, Diana, wants grandchildren. Vince lives in Niagara Falls, the Romance Capital of the World, and he doesn’t even date! Diana joins the Moms on Missions (“MOM”), who strive to better the lives of their clients’ kids. MOM installs Vince’s fantasy girl upstairs in the duplex where he lives.

Their pick for Vince is sick of dancing to her mother’s tune, so she certainly won’t admit she finds her sensitive, playful neighbour sexy. However, she’d love to make him her pseudo-boyfriend to get MOM off her back.

Will these young rebels come together organically, or is there no hope for their moms?

Vince stares open-mouthed at the door in front of him, then turns on the landing to find Paeng at the foot of the stairs, dressed for bed, with no glasses. Steaming, Vince tromps back down the stairs, in time to hear the drumming start again. “What a nerve this guy's got! Little shit.” Now Drum Boy is singing, too. Badly. Vince stops, wondering whether to turn around and march back up there to rattle his teeth.

Instead, he stomps back into his unit, Paeng at his back, and calls Damon.

“Vince, hey, how’s it hangin’?” Damon asks cheerfully. “Want to hit The Hill for a few beers? I’m dying to get out for a bit.” 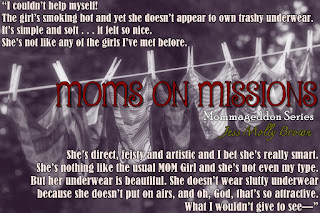 “No. Do you hear this?” Vince holds up his phone to the ceiling, hoping it picks up the noise.

“What is that?” Damon asks stupidly.

“It's your new tenant,” Vince growls. “He drums twenty-four seven. I have explained this to you, Damon. Twice. The last time Paeng and I had two minutes’ peace was the day before he moved in. I am losing it, man. I’m going to go postal soon. If I do, you are going to have to explain why to our mothers, and you are going to have to comfort them both while I’m getting corn-holed in Kingston Pen for capping the little bastard, capisce?”

“Whoa-ho-ho, there Vince! Did you say there's a guy living up there? It was supposed to be Mrs. Maggione’s friend Gloria’s daughter, Mary. She’s gor—” Damon checks himself, and Vince scowls. “Um, I mean uh . . . Trudy?” he calls to his wife. “Get me another beer!”

Vince counts to ten. “Did Moms on Missions set this up?” There is silence for a couple beats. From Damon, not Drum Boy. The noise from above is as obnoxious as ever.

Damon sighs. “Yeah, you know it. I didn't even meet the Chiclet.”

“No, no, it’s a guy! And the name on the mailbox says D. Darren, not M. diGiordano. Why didn’t you come to check out the tenant?”

“My mother wouldn't put a crackhead in there, ya know?”
“And a drummer makes a better tenant because . . .”


Goodreads
About the author:

Don’t be fooled by the seeming tranquility, Jess is scheming. There are a lot of characters in her head and all of them are yelling for attention.


She edits for professional authors and is always tutoring somebody. She got her start six years ago, in fan fiction, and is proud of it.

Four great kids, one husband *coughbiggestkidofallcough* and two dogs ensure that the house is always messy. The garden’s overflowing with blooms, but weedy. The grass always needs cutting, provided it’s not buried beneath snow. She lives in Canada, eh? The dogs are walked, the kids get fed, the hubbs hasn’t killed anybody yet, the books Jess reads she reviews, and somehow, the people in her head manage to make it into stories. Occasionally, she embarrasses her kids by doing Zumba in front of their friends. It’s just how she rolls.

Come join her quest for world domination at:

Thank you for blogging my book. <3