In summary, she is the perfect mercenary. A life in the shadows where she can stay in darkness is fine by her. That is until he tries to pull her into the light. 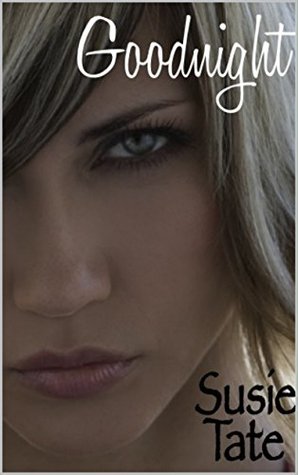 That is the reality Goodie has had to accept since she was nine years old. Even before the night her childhood shattered she was never normal: her mind can process people and situations at lightning speed, she has the ability to recall anything she sees or hears with perfect clarity, she can separate from herself if she needs to – making her difficult to torture, difficult to intimidate. In summary, she is the perfect mercenary. A life in the shadows where she can stay in darkness is fine by her. That is until he tries to pull her into the light.

Powerful, arrogant, filthy-rich men are, quite frankly, a pain in Goodie’s arse. She’d much rather take an extraction job in the depths of a Colombian jungle than have to deal with their bullshit. But sometimes the money is just too good to turn down, and this time someone important, who is actually doing something Goodie believes in, needs to be kept safe. Luckily, Goodie is an expert at maintaining an invisible presence, enabling her to keep any interaction with the egomaniacs she protects to a minimum … until she meets Nick Chambers.

Nick doesn’t seem to understand invisible presence, appropriate employer–employee protocol, security precautions, following instructions, or in fact just leaving her the fuck alone. Everything about him, from his ability to laugh at their situation to the perpetual smile on his gorgeous face complete with goddamn dimple, drives Goodie insane, and for some reason makes her feel threatened. Fear is weakness, and if Goodie’s life has taught her anything it’s that you never, ever show weakness.

But Nick is determined, and he’s used to getting what he wants. He’s been effortlessly charming the women in his life since he was five years old, so he knows it won’t be long before he has Goodie right where he wants her. Only some things are so dark, so horrific, they can’t be dragged into the light. Some people are beyond redemption, and Goodnight may be one of them.

This book is a full-length, stand-alone contemporary romance of approximately 85,000 words with no cliffhanger. 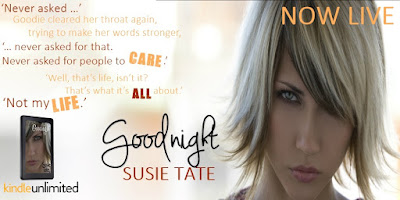 Nick watched as Goodie’s eyes opened again, and searched for the panic he could have sworn was there before she closed them, but her ice-blue gaze was now blank, all emotion wiped from her expression. She moved quickly, her mouth crashing down on his and her hands going up into his T-shirt.

‘I want you,’ she told him, her voice husky and unbearably sexy as her hands traced over his abs and the muscles of his chest. He sucked in a sharp breath – he could tell something was off, there was an unnatural desperation about her; but with the woman he had been obsessing over finally touching him, he became incapable of rational thought.

‘Christ,’ he rasped as one of her hands moved down to his crotch and all his ability to think was obliterated. He drove both his hands into her soft hair and took control of the kiss, pushing her back to lie on the duvet he had dumped on the floor. He pulled her hands from him and unzipped her hoody, revealing the black bra beneath. Her body was more amazing than he had imagined (and he had a good imagination and had invested a fair amount of time on this endeavour when it came to her, so that was saying something): she was all defined, toned muscle, combined with softer curves. She was magnificent. She rocked against him and her hands went to his belt, frantically pulling at the buckle. Something about her movements jolted Nick out of his lust-induced haze. He dragged his eyes from her breasts and stomach to her face and he almost flinched. Her expression was blank and her jaw was clenched.

‘Goodie?’ he whispered, and her gaze flew from his belt to his face briefly before focusing just over his shoulder. ‘Hey … hey,’ he muttered, grabbing her hands to still them in her frantic attempts to undo his belt.

‘What is problem?’ she asked sharply, her Russian accent thicker than normal and a frown marring her beautiful face.

‘Where did you go?’ Nick asked, his eyes roving her face. He gathered both her small hands in one of his and reached up to cup her cheek, stroking across her cheekbone and up to her crescent scar with his thumb.

‘I am here,’ she said, jerking her head to the side, away from his touch.

‘Scared?’ Goodie spat, wrenching away from him, and then scuttling back against the units next to Salem, who raised his head in surprise.
*****
Goodie was breathing hard, her exposed chest rising and falling. She desperately wanted to zip her top, but knew that would show yet more weakness. She had perfected the type of meditation that took her out of her own body many years ago. The fact was that there were times in her life that she needed to be able to separate from herself; torture situations being one example, any form of intimacy being another. But nobody, nobody had ever called her on it. Nick made a move forward and she flinched – fucking flinched. What was wrong with her? Salem could feel her tension and flattened his ears against his head, letting out a low growl. She stroked his head and muttered to him that everything was okay in Russian – Salem could smell fear and the only other times Goodie had been as tense as this was when they had been in mortal danger, so she didn’t exactly blame him for his reaction. Nick continued to move towards her, his palms up like he was approaching a terrified wild animal. When he was inches away he reached down to her zipper and surprised her by hooking it together and pulling it up, covering her to just under her chin.

‘Are … are you okay?’ he asked softly, and for the first time since Goodie was eight years old she felt her eyes sting with tears. She blinked rapidly and gritted her teeth. What the fuck was going on? Nick turned and sat next to her on the floor up against the units leaving just a little more space than before, which she was grateful for. They sat in silence for a few minutes.

Goodie sucked in a breath preparing to have to explain her reaction to him ‘– but … well, you don’t seem to have the full complement of toes.’ Goodie blinked, letting out a short bark of laughter in her relief (but unusually for her not noticing Nick’s body jolt at that rarity) and staring sightlessly down at her bare feet. Yes, she was two toes down – both her little toes were missing and part of her third toe on her left foot; ugly scars marked where they had once been.

‘I have never noticed this before,’ she deadpanned, curling the few toes she did have into Salem’s fur so that he would settle back down to go to sleep.

Nick sighed. ‘You won’t give anything away, will you. You are the most closed person I’ve ever met. It makes me crazy – do you know that?’ Goodie shrugged. ‘Can’t you just tell me this one small thing? Give me that at least – you know everything about me.’ Goodie rubbed her temple and closed her eyes slowly. After a few silent moments Nick puffed out a frustrated breath and she felt him start to push up to stand.

‘Frostbite,’ she blurted out. She had no idea why, as his questions annoyed her to death, but the idea that he would give up asking them made her stomach clench with actual pain. He eased back down and turned his body towards her. She could feel him watching her face closely.

‘How did you get frostbite badly enough to lose actual bloody toes?’ He sounded incredulous, and weirdly furious, about something Goodie considered relatively trivial. She had been lucky to come out of what happened that winter alive, leave alone largely intact.

‘I lay in the snow for a long time,’ she told him.

‘Why did you do that for God’s sake?’

‘Well, that’s just goddamn ridiculous. Whoever ordered you to –’ ‘Nobody orders me to do anything,’ she told him. ‘I had a job and I was going to complete it. I knew the risks.’ And she’d finished the job too. The cold had driven her nearly insane and she’d thought she would go blind if she had to stare down the sight of her rifle any longer. Even now she could still feel the surge of excitement as her target finally came into view after so many hours waiting, and the internal battle she had to fight to remain in control of her heartbeat and breathing. She’d resisted the urge to just fire immediately, taken three deep breaths, and on the respiratory pause at the end of the last breath she’d taken her shot. Adrenaline was pumping through her system but she still had to make sure that even after the shot had broken she maintained a slow steady squeeze on the trigger; follow through is everything. So despite the cold and the pain, when she did get her shot she took it; she finished it.

About the author:
Susie Tate is a general practitioner and when she's not working she's looking after her four yummy boys under six (okay one is actually over thirty-six but it's the mental age that counts!). This is the first of her books to be set totally outside the medical world and is a little darker than the others, but hopefully still funny at times.

Thank you so much for the giveaway!

What an unusual and sad life Goodie had. From the bit we learn of Nick it doesn't sound like he's going to make her life any better. Or will he? I'll be reading it to find out.

It's on my list to read! I'm really excited to read this book; I love "dark" books and stories :)

Sounds extremely interesting! Thanks for the giveaway!

I'm glad the author decided to go dark with some comedic undertones.

Books sounds really interesting lolol thanks for the giveaway

i really liked the cover.would be interesting to read this.thanks
(sachin )

A good mercenary is hard to find.

I really enjoyed reading the excerpt and learning more about this book. This book sounds like such an interesting and intriguing read! Can't wait to read this book!

This sounds great and can't wait to read. Keep up the great work.

Wow, prize amazon gc is fab. & splendid. 2 fingers snap. It is tight, fly & off the chain. Thank you for the awesomeness, the contest, and generosity. :) Pick me, pick me! Dear Santa: I’ve been nice. My X-Mas wish this year is to win this contest. Starving artist here desperately needs the gc to shop and eat. A life changing exp.

Beautiful cover! What was your inspiration for the story?

Great excerpt, this sounds like an interesting and intense story. I'm looking forward to reading it, thanks for bringing it to my attention.

Thank you for the chance at the giveaway! Added it to my to-read list.

I like the book cover. I like the main character and want to read the whole story.

Looks great, so what is your favorite book?