FBI profiler Jeff Crandall returned to Fiddler, Idaho, to work on new Bureau protocols in peace…and because he hasn't been able to stop thinking about Abby Quinn. Kind, beautiful and quietly sexy, the petite rancher next door is loved by the entire town but keeps fiercely to herself. She's a mystery that doesn't want to be solved, though he's desperate to try. 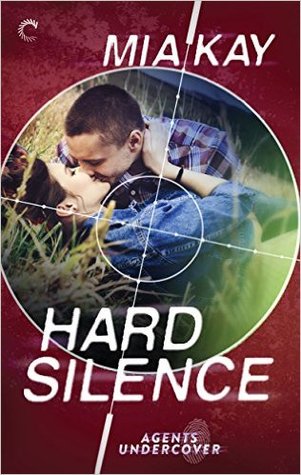 FBI profiler Jeff Crandall returned to Fiddler, Idaho, to work on new Bureau protocols in peace…and because he hasn't been able to stop thinking about Abby Quinn. Kind, beautiful and quietly sexy, the petite rancher next door is loved by the entire town but keeps fiercely to herself. She's a mystery that doesn't want to be solved, though he's desperate to try.

Whether that interest is professional or personal is a question he'll sort out later.

Abby knows sharing her secrets would bring death and destruction to Fiddler. She survived her childhood, barely, but a long list of stepfathers weren't nearly so lucky: their bodies are buried across the country, waiting to be discovered. The best protection is silence, anonymity and isolation, though the handsome agent next door seems hell-bent on destroying all three.

And he just keeps kissing her…

When Jeff is called in to investigate an interstate serial killer case spanning two decades, Abby knows it's only a matter of time before he connects the dots, sees her for who she really is and walks away. But it's when he's standing in the crosshairs of Abby's past that Jeff faces his biggest challenge yet: how to give the woman he loves the life she doesn't believe she deserves.

The Lewisville Clarion headline was brief, and the story wasn’t much longer. Beau Archer’s remains had been found in an old well on his property in Virginia. The man had gone missing twenty-eight years ago and, without family to keep it open, the investigation had gone cold.

Abby Quinn read the story three times, scrolling through the online version of the small-town paper in the hopes of finding more information. When she didn’t, she wavered between relief and regret.

Beau Archer, her first stepfather, had stumbled into her life when he’d married her mother in Atlantic City. He’d taught Abby to ride a bike. She could still hear his boots pounding on the hard-packed dirt of the country road in front of his house, his heavy breath in her ear. He’d whooped with laughter when she’d turned at the end of the lane and made her wobbly way back to him. Then he’d taken her for ice cream.

A month after that memorable bike ride, his loving wife Wallis had shoved his lifeless body down a well.

He deserved more than one paragraph in the newspaper, but at least now he’d get a headstone.

Toby—her third Toby in almost twenty years—whined through the screen door, reminding her of the time. She deleted the alert email, cleaned out her trash folder and cleared her browser history. It was time to get to work.

Walking out onto her front porch, Abby let the door slap closed behind her as she stood and enjoyed the brisk Idaho spring morning. Past the security light illuminating the yard, the still-early lavender sky met the dark hills on the horizon.

Stretching her muscles, she winced as pain lanced from her neck down her left side. Most days she could ignore it, but she’d pushed too hard yesterday. She’d felt the muscles cramp as she’d fixed fences and then stayed at the computer, perched in her chair squinting at code until late in the evening.

And then the nightmares, and the news about Beau.

Already halfway to the stables, Toby looked over his shoulder to see if she was following. Abby swore the border collie was smiling. She could always count on her dog.

“Work. Yeah, I know,” she grumbled good-naturedly as she tramped down the steps and toward the paddock. At the outer edge of the light, she faced the darkness beyond and hesitated.

Nineteen years, sixty-nine hundred mornings, and she still gritted her teeth and held her breath when she stepped into the shadows. But she did it.

She did it again when she swung the stable doors open. Reaching around the wall, she turned on the lights before she stepped inside.

On either side of the aisle, her horses poked their heads over the stall doors, blinking under the bright lights, chuffing and huffing hellos.

“Good morning, George,” Abby whispered as she put a calming hand on the palomino’s velvety nose. “I told you I’d be back this morning.” After a year of working to earn the animal’s trust, it was rewarding to look into eyes no longer hazy with disappointment. Still, the minute the gate opened, George trotted into the misty dawn, as though afraid someone would slam the door and trap her inside.

The other horse remained quiet in his stall. “Good morning, Hemingway,” Abby whispered as she stroked the giant black gelding’s nose and danced her fingers through his forelock. He was becoming such an elegant animal. “How are you, handsome? Ready to work this morning?” He dropped his head to her waiting hand. “I’ll take that as a yes.”

She forced her left arm up, ignoring the persistent pain, slipped the halter over his head and scratched his ears until he quieted. “No saddle today, I promise. Let’s get used to this first.” She opened the door but let the lead rope dangle as she walked away and let him follow. He needed to know she wouldn’t tug and pull. His clopping tread reminded her of Beau and her wobbly bike ride.

Shaking the memory free, she stood in the stable doorway. The pasture was cloaked in fog, and dew silvered the grasses not already trampled. It was like looking through a soft-focus lens. In this moment, right before sunrise, the world was fuzzy, tinted green, blue and gray. The birds chirped quiet, sleepy greetings. Hemingway froze when she picked up the rope.

“I won’t hurt you.” Abby took one step, keeping the lead slack, and waited. When the animal moved forward, she took another step. They inched through the paddock and the gate to the edge of the field.

“Good boy,” she murmured as she offered him a carrot and stroked his graceful neck. “See? No pain.”

Leaving him there, she went back into the stable only to run out when an equine scream ended in canine yelps and snarls. All that remained of Hemingway were his thundering hoof beats and the waving grass.

Abby knelt next to Toby and ran her hands over him, checking him for injuries. The dog’s shame gave way to a plea for a belly rub.

“I know you want to herd him,” she scolded as she gave in and scratched his chest, “but he hates to be crowded right now.” She stood and sighed. “Let’s go get him.”

Hem’s trail was marked in the dew, and easy to follow. The tall grass swallowed Toby in a gulp, and Abby waded through the swaying fescue to the river, her bag of carrots and apples bouncing against her hip. Stepping carefully on the slick rocks, she hopped to the Simons’ pasture and continued up the hill.

Off to her left, a covey of quail clattered clumsily into the sky, scaring her as much as she’d startled them. Toby shot off, intent on catching the slowest prey. Abby trudged on alone.

The giant gelding was stopped at the fence, munching on Deb Simon’s newly budded shrubs. He watched her approach with one dark, wild eye.

“Shh.” She touched his neck and pursued him when he flinched away. When he quieted, she rubbed his sweaty coat and stared down at the ragged plant. “I hope you haven’t killed that. I’ll never find a replacement.” At least the Simons were gone for the summer. It would be enough time to determine the damage and do some shopping, if necessary.

Comforting pats grew to long strokes as Abby ran her hands over the horse’s shoulder and then down his back. When she reached his ribs he stepped away and tossed his head. She kept a steady grip on the lead rope. “Quiet. I need to see if you’ve reinjured yourself. It won’t hurt. I promise.” She hoped she was right.

She got farther the second time. “Good boy, Hem.” He moved away again, and she started over.

It took four tries before she could run a light hand over his bones and feel the spots that were once jagged pieces. The horse shook beneath her, but he stayed still. “Good boy. I know it’s scary to trust someone, but you’re a brave man.” She pulled an apple from her bag. “You’re going to be good as new.”

The horse ignored the treat and stared over her shoulder, his nostrils flaring at a new scent. They weren’t alone.

Abby’s skin tingled as her muscles tightened. If she faced the intruder, she risked chasing Hem again. She tensed and moved her weight to the balls of her feet and whistled for backup. Toby came at a run. The dog was too well trained to bark, but his eyes stayed glued on their observer. Abby kept her focus on her dog.

Instead of growling, he wagged his tail. He’d seen whoever it was before. Convinced it was safe, Abby turned to face their audience.

Jeff Crandall stood on the Simons’ porch, barefooted, in a wrinkled T-shirt and faded jeans. Lounging against a newel post, he was sipping a cup of steaming coffee, holding it with one hand while the other was shoved into the front pocket of his jeans.

Goodreads ** AmazonUS ** AmazonUK ** AmazonCA ** Barnes&Noble ** Kobo ** iTunes ** GooglePlay ** AllRomance
About the author:
Mia Kay spent years writing legal documents and keeping people out of trouble. Now she spends her days looking for ways to get her characters into trouble. She lives in Arkansas with her husband, who doesn’t mind discussing (and sometimes causing) mayhem over breakfast.

Wish it was in print, would love to read it :)