The hunter in charge calls her: Bait (Order of the Spirit Realm #1) by Kasi Blake

After sixteen years on the run, Bay-Lee joins her emotionally distant father at his New Zealand school. On her first night there, he dumps her on the doorstep and walks away. Big surprise. Minutes later, a bag is thrown over her head, and she’s kidnapped for Orientation. The hunter in charge calls her Bait. According to him, that’s all she’s good for, to be used to draw out monsters for experienced hunters to kill. 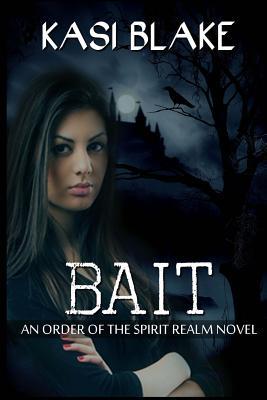 After sixteen years on the run, Bay-Lee joins her emotionally distant father at his New Zealand school. On her first night there, he dumps her on the doorstep and walks away. Big surprise. Minutes later, a bag is thrown over her head, and she’s kidnapped for Orientation. The hunter in charge calls her Bait. According to him, that’s all she’s good for, to be used to draw out monsters for experienced hunters to kill.

Before Bay-Lee can move up to the rank of Hunter, she will have to prove herself, battle wraiths, a reaper in disguise, and a stampeding border monster. With the addition of her classes, she’s going to be way too busy for a social life. Falling in love is not on the agenda.

Then, she meets Nick Gallos. With the intimidating rank of Warrior, Nick is gorgeous, arrogant, and just plain rude to her. It’s obvious from their first meeting that Nick is hiding a dark past overflowing with secrets, and her father is right smack in the middle of it. Nick seems to be using her to get even with her father, and she won’t tolerate that. What a jerk.

So, why can’t she stop thinking about him?

Bay-Lee shoved him back against the wall.  Her fingers twisted in his black shirt as she shouted, “I have had enough of your crap!  You are going to mentor me whether you like it or not.  Got it?”

Her dark eyes blazed with the fiery passion missing from his life.  This girl wasn’t afraid of anything.  He squelched his growing admiration for her and shook his head.  It would be better for everyone if he held tight to his anger instead of giving into his desire to kiss her.  He reminded himself that she was the cause of his problems.  “You are delusional.  I’m not doing anything I don’t want to do, and I don’t want to spend a single minute with you.  End of story.”
A few students snickered as they walked past them.  It was enough to convince Bay-Lee to release her hold on his shirt, but she didn’t give him any room to maneuver.  One of the new boys (Jonah) stood in the background, watching them.  As if realizing they weren’t going to get any privacy, Bay-Lee lowered her voice.  “Hey, I didn’t ask you to volunteer.  That was your brilliant idea.  If you hadn’t made a big deal over taking the job, maybe someone else would have.”
He wagged a finger in her face.  “Listen up, sweetheart.  I know you think you’re something special because you’re Van Helsing’s only child, but I am not impressed.  From the moment I saw you that first night I knew you were too soft to last a week here.  You are going to screw up royally and get your butt sent home, and you are not taking me down with you.  I worked too hard for my rank.”
He tried to push past her without knocking her down.
“You’re wrong.”  She stood her ground, not giving an inch.  “I was born for this.”
“Go then.  Go prove it.  Just leave me out of it.  I want less than nothing to do with you.  Now move out of my way.”
“You’re not going anywhere until you agree to do your job.”
He forced a grin while everything in him wanted to smash his fist through the wall behind him.  “Stop embarrassing yourself.  Flattering, really, but I am way too busy to train you.  Van might not know it yet, but he’s about to bring Tyler Beck back to life.  Then I’m out of here.  I don’t want to work with you.  Get that through your thick skull.”
“Too bad.”  Her hands went to her hips and she stared a hole through his face, unblinking and unflinching.
“Excuse me?”  He crossed his arms.
“You said you were going to mentor me and you are.  Deal with it.”
He pushed away from the wall and leaned forward until his face was a mere inch from hers.  Slowly he enunciated two words.  “Make me.”
Hands on her shoulders, he lifted her off the ground, turned, and deposited her on the other side of him.  The look of shock on her face melted into boiling rage.  He wouldn’t be surprised if she took a swing at him.
“You don’t think I can, but you are so wrong, Tyler.”
The name of his alter-ego slipped off her tongue, drenched in irony, and the sound of it stopped him from walking away.  She threw down an invisible gauntlet, daring him to pick it up.  No longer cute, the girl was getting on his last nerve.  He decided to meet her on the mental battlefield with guns blazing.  “I’d love to see you try to make me do anything, Michelle.”
Using her last alias, the name she’d been going by when they’d first met seemed to throw her off balance.  She blinked.  He had her on the ropes now.  Grinning with triumph because he was going to win this battle, he continued.
“No, wait.  Michelle is all wrong for you.  That’s the name of someone strong and capable of taking care of themselves.  You’re cute and cuddly like a harmless bunny.  I think I’ll call you Micki.  So what do you say, Micki?  How long before you wash out of the program?”
If anything, she stood taller and poked him in the chest with one finger.  “I’m not going anywhere, Tyler.  This is your last chance to give in without getting hurt.  Agree to mentor me or prepare to be sorry.”
He opened his mouth to tell her to go jump in Van’s lake and drown herself.  A bloodcurdling scream ripped through the hallway.  Fight forgotten, they raced down the empty corridor.  Nick moved faster, running ahead of Bay-Lee, but he could hear her feet pounding the floor behind him.  He didn’t have a weapon on him.  If it was something bad, a monster in the school, they were in trouble.


Bait is FREE!
Goodreads ** Smashwords ** Amazon ** Barnes&Noble ** iTunes
About the author:
Born and raised in California, I fell in love with writing while reading The Outsiders. Then I fell in love with Stephen King's writing style. I enjoy reading many types of books, but YA Paranormal is my favorite. I used to write for Harlequin under a different name. So that's my background. Exciting, no?

Yes, I want to read this, :) I like the combination of a strong female and a strong male battling wits and whatever else comes along, grins

It actually sounded interesting - so I went and got it on Amazon. :-)