Will it be too late? - Breaking Braydon by M.K. Harkins

"If you love a book that keeps you awake at night because you to need to know what happens next, then you should put Breaking Braydon on your TBR list. In fact, I think you should move it to the top.
I gave Breaking Braydon 5 stars, exploding ones." - Goodreads 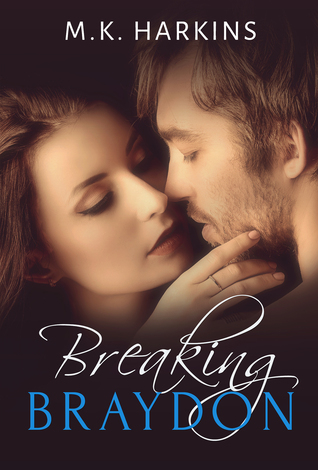 Playboy billionaire Braydon Decker changes women more often than designer ties. Scarred and humiliated as a teenager, he pledged long ago to never trust a beautiful woman again. But then he never imagined meeting one quite like Jain Parker.

Jain, a dedicated medical research scientist, learned early in college that her good looks were a hindrance and she’d have to tone down her beauty to be taken seriously, thus, Plain Jain was born, and men were no longer an issue. Of course, she didn’t count on running into Braydon Decker.

A successful venture capitalist, Braydon holds the key to whether Jain’s research company sinks or swims. When the two are forced to work together on a fundraising campaign, they’re instantly drawn to one another, despite their individual vows to remain unattached. As they navigate unchartered waters, their inability to trust wages war with their desire to love.

Hearts are broken and trust is shattered when betrayal and lies are revealed. Will the truth bring them healing and forgiveness, or will it be too late?

MK has always been a voracious reader. After hitting a dry spell of reading material, she decided to write the kind of book she'd like to read. This resulted in the creation of her debut novel, Intentional. (Award for Best Sweet Romance - eFestival of Words- August 2014) Unintentional, her second book, is based on the life of one of the characters in Intentional. Unintentional was written as a stand-alone book. Breaking Braydon is MK's newest work. It will be published early 2015. When she's not writing novels, she likes to spend her free time traveling the world, splashing in mud puddles (She lives in Seattle, what can she say?), watching movies and reading (!) MK also runs her own business in her current hometown of Mercer Island, Washington. She LOVES to hear from her readers!

a Rafflecopter giveaway
Posted by CCAM at 11:00 AM