Their motives are far from innocent - False Finder by Mia Hoddell

"False Finder is a fast-paced, action-packed thriller that never ceases to keep the reader guessing. Loaded with twists and turns, the plot is well written and the characters are so lifelike that it feels like you truly get to know them." - Goodreads 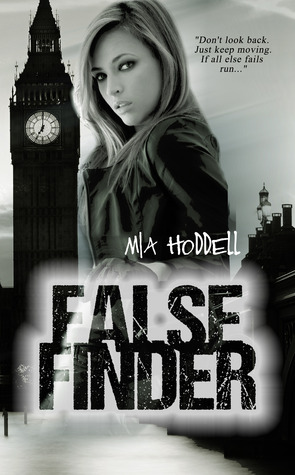 Cora has been able to detect lies since she was born, she’s…a False Finder.

However when blackmail, betrayal, and lying are all the population has to protect themselves, it makes her dangerous. It also makes her a target.

Because of Cora’s ability, Rogan Carvelli—London’s biggest criminal leader—has been trying to acquire her for years.

Cora has learned to survive and remain undetected—at least until one careless mistake causes her friends to betray her.

Sold to Carvelli, Cora is only left with the help of a secret organisation to escape. She knows nothing about them, but they have saved her too many times to ignore.

However, the closer she gets, the clearer it becomes…
Their motives are far from innocent.


“Not my fight? How did you come to that conclusion? You made it my fight when you sold me, Cora. This is your fault not mine, and you only have yourself to blame!” Nick roared, his grip tightening to a new painful intensity.

“I did not sell you. I cut a deal with Rogan and you were collateral damage. I couldn’t help it.”

Even Cora flinched at her words. What she had done to Nick was awful, but it was a necessity if she was going to survive.

“You signed my life away. You ruined my life by forcing me into a god-damned contract that has no loop holes. Not only that, but then you had the audacity to attack me when you escaped Rogan’s mansion last time. That is not collateral damage!”

He didn’t realise he was shaking her fragile body until she let out another low groan.

“You weren’t meant to be a part of the deal. I couldn’t help it. I tried to get you out of it, but there was no way. It was me or you.”

“Don’t bullshit me. You know there was a way out. I did nothing to you but be there and you sold me out, just like your friends have done to you.” His words cut Cora like a knife, slitting her deep.

“You knew too much…you knew my secret…you weren’t meant to survive.” Cora muttered the last line, her jaw tight with anger as she finally admitted the truth she had kept bottled up. He wasn’t meant to hear it, but he did.

“What did you just say?” He was shaking her once more, anger flowing out of him as he was finally enlightened as to why Cora had betrayed him.

“Well unluckily for you I manned up. Not only did I pass every test Rogan threw at me but I worked my way up. I’m now his second in command. How’s that for irony?”

“Screw you,” Cora spat, tired of the conversation.

“You wish. For now though, I think I’ll return the favour you so kindly granted me all those years ago.”

“Let me go, Nick, for old time’s sake. I thought we were friends?” It was a lousy defence and Cora knew it, but it was all she had left.

“We stopped being friends years ago when you shafted me, Cora. I couldn’t care less what happens to you anymore. Now shut up and move.”
“Well? Are you going to take me to her or not?” Cora asked, getting frustrated as she cocked her hip out in annoyance.

“What’s your plan if I say no?” Rogan looked at his watch casually, which only irritated Cora more.

Rogan shrugged nonchalantly in response, neither denying nor confirming her comment.

“You believe what you choose to believe.”

Before Cora could think it through, she snapped. Her fist went flying towards Rogan’s face quicker than she expected and she could do nothing to retract it.

Rogan lifted his arm to block her a split-second before the punch was about to land. Deflecting her blow, he diverted her fist to the side and using the momentum she had built up he gripped her wrist, spinning her around and pinning it behind her back. Leaning on the space between her shoulder blades, he shoved her body against the door, his six foot three frame towering over her.

“Don’t you ever try something like that again,” he said, his tone lowering to a dangerous level, his head close to hers.

“Why not? What are you going to do? It’s not like you can afford to lose me so I don’t have to worry about being disposed of like normal employees,” Cora shot back, trying to act more confident than she felt which wasn’t easy when she could smell the wood her face was pressed against.

There was a controlled power to the grip he had around her wrist. She could sense that he would only have to make a slight adjustment to his hold to be able to snap it like a twig.

“You may be of more use to me than the others but that doesn’t mean you’re untouchable. I only need you coherent and that leaves a lot of options, regarding pain, open to me. It’s in your best interest not to test me.”

Mia Hoddell lives in the UK with her family and two cats. She spends most of her time writing or reading, loves anything paranormal or romantic, and has an overactive imagination that keeps her up until the early hours of the morning.

By the age of nineteen, Mia had published nine books, including the Elemental Killers series and the Seasons of Change series. Since then, her books have charted on numerous Amazon Bestseller Lists, and she has also had poems published in a many anthologies. With an ever growing list of ideas, Mia continues to create fictional worlds through her writing, and is trying to keep up with the speed at which her imagination generates them.