If they don’t work together, they may be torn apart... - Savage Bytes (Hacked Investigations #2) by Sarah Mäkelä

"The clientele so far had kept them busy, with common requests that involved backtracking various network intrusions to their point of origin and leaving the rest to the customers. Others required mundane tasks such as verifying the authenticity of gray-market implants and other upgrades not sold in broad daylight." 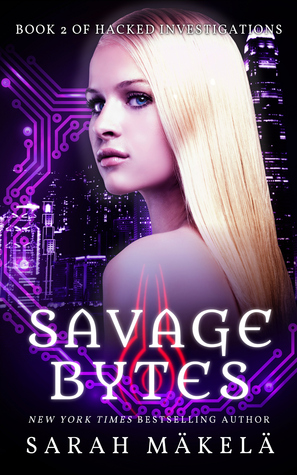 If they don’t work together, they may be torn apart...

Private investigator Hannah Franklin has a new partner, her lover and technomage, Ian Bradley. But they may be in over their heads when brought in by their friend from the hospital to quietly solve a case that baffles even the police. The victims are being murdered in a ritualistic fashion with their blood drained and organs removed.

When Ian's attention narrows solely to their work, he'll need to keep their relationship strong, or he could find himself repeating a painful past.


About Book #1 - Techno Crazed is a fantastic beginning to the series. The story is full of diverse, engaging characters and fun twists along the way. There's comedic relief from the life-threatening story line, as well as sweet moments between the couple. I can't wait to read more about Hannah and Ian. I love the balance between intrigue and the development of the relationship. - Goodreads

Hannah Franklin froze in the doorway of Ian Bradley's weight room. Ian lay shirtless on the bench as he pressed the bar into the air over his muscular chest. With each rep he did, the muscles in his chest rippled deliciously. She licked her suddenly dry lips and cleared her throat.

His gaze caught hers, and he smiled. He rested the weight on the stand. "Hey, is everything okay?" He sat up and wiped his palms on his khaki cargo shorts.

"Yeah, we just received a call about a new case." She still found it hard to believe how many people had wanted to hire them after going against MAX Home Security. Sometimes, they actually had to turn people away. What a feeling.

Ian raised an eyebrow at her. "Tell me more. What is it about?"

"It's Leon. He wants to meet with us at St. Gregory's hospital in a little over an hour. He seemed pretty stressed." She leaned her shoulder against the doorframe, and a frown tugged at the corners of her lips.

Ian stood and then crossed the room to her. His hands cradled her neck, and he pulled her in for a warm kiss. His lips brushed hers, and she opened her mouth to him, allowing his tongue to stroke hers and fan the burning flames within her body.

Hannah gently pushed away after a moment. "I said we would be on our way." She raked her gaze over his firm, sweat-slick torso. "Besides, I think you need a break from working out."

Ian grinned and reached for his white towel. "I'll go hop in the shower real quick." He wiped off his face and hung the towel around his shoulders as he sauntered away.

Hannah's life had been a roller coaster after reuniting with Ian, her once ex-boyfriend. Now he was her partner in their private investigation company, Hacked Investigations, which specialized in technology-related crimes. The clientele so far had kept them busy, with common requests that involved backtracking various network intrusions to their point of origin and leaving the rest to the customers. Others required mundane tasks such as verifying the authenticity of gray-market implants and other upgrades not sold in broad daylight.

Up until recently, they'd been financially stable. The last two weeks had been slower, and their bills this month were a lot higher than expected. It didn't help that the silly gnome was as ravenous as ever.

She sighed and returned to Ian's small home office to retrieve her jacket. The weather outside was fine, but it could change so quickly, especially this time of year.

"Hey, if you're going out anyway, bring me back a bag of those chocolates I like! We can't all live on coffee, pasta, and CONDOMS, you know?" An obnoxious voice came from the kitchen before she had an opportunity to see the loud-mouthed gnome it belonged to.

"Nice to see you too, Bernard. Finished with the garden so soon?" Hannah forced a smile. "We're heading out to interview a client. Leon called, and we're going to see if we can help him," she said.

Bernard wore classic lederhosen and had a maniacal grin on his face. "Well, the garden can take care of itself for a while. So, why are you heading out to see that flamboyant rainbow-licking nurse? Unless, of course, he wants to trade make-up tips," Bernard said. A devious glint lit his eyes.

Hannah sighed. She could only take so much from the gnome today. Ignoring the other foul comments, she shrugged into her jacket and walked by him. Water sounded from the shower behind the bathroom door. She'd love to join Ian, but they'd be going nowhere fast if she did.

Instead, she sat in Ian's favorite recliner. A quick glance proved the gnome had vanished, giving her a moment's peace.

During their struggle against MAX Home Security, Leon had played a crucial role in getting past security guards and helping them talk with Senator Kendall, who cleared their names after the police had suspected them of attacking the senator. Leon lost his boyfriend, Rich Granger, due to MAX's overeager employee termination program, and he'd been more than willing to help them take MAX Home Security down.

The lack of background noise alerted her to the fact Ian was done in the shower and would be ready to go soon. She glanced in the mirror to reassure herself that she looked professional enough, and then she crossed the room to her safety box for her gun and a clip of ammo. The streets were more dangerous than ever now that MAX Home Security had restrictions placed on them by the legal system. Despite their corruption, MAX held low-level criminals under better control than what the police were capable of.

Ian entered the doorway, dressed in jeans and a polo shirt that revealed enough of his build to make her gaze linger over his toned body.

A life-long paranormal fan, she still sleeps with a night-light. In her spare time, she reads sexy books, watches scary movies (and Ghost Adventures), and plays computer games with her husband. When she gets the chance, she loves traveling the world too.