A twisting, panic-filled journey through the secretive corridors of power - Nothing Left Sacred by Daniel Diehl

"NOTHING LEFT SACRED was an interesting, thoughtful read. The title was written by Daniel Diehl and his accomplishments and awards are outlined in the book. He is known as an author, writer and investigative historian. [...]
I liked the writing style of Mr. Diehl. Reading period literature (fiction or nonfiction) can often be quite an uphill slog, but NOTHING LEFT SACRED was extremely readable without digressing to a lower quality level." - Amazon 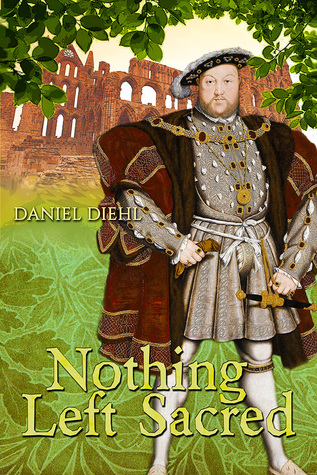 
Nothing Left Sacred takes the reader on a twisting, panic-filled journey through the secretive corridors of power surrounding Henry VII and the glittering Tudor court. This taught political thriller carries us from the grandeur of the royal palaces to the seldom-glimpsed resistance network that rose in opposition to Henry's radical religious reforms which would create the Church of England.

When the mounting panic created by the King’s emotional instability combines with the twisted machinations of a corrupt justice system, they collide head-on with the leaders of England’s fantastically wealthy, yet tragically naïve, monastic community. The struggle between these opposing forces creates an atmosphere of claustrophobia and dark political paranoia not found in an historical novel since Umberto Ecco's 'The Name of the Rose'.

I must say when I first took this book on to review, I knew I was stepping way out of my normal reads. But with saying that, I must admit, I was glad I took this one on. It intrigued me right from the start. I was turning the pages and having a little bit of a hard time putting my reader down. My attention was kept and my curiosity filled. This to me was a twist on history and mystery! Great read! - Goodreads

Daniel Diehl has been an author, writer and investigative historian for thirty-five years. For nearly twenty years Diehl has been involved in writing for publication and documentary television production. Mr. Diehl’s work has won awards from the Houston (Texas) Film Festival, the National Trust for Historic Preservation (US) and the City of Pittsburgh, Pennsylvania Arts Foundation. Working alone and as a part of the multi-award winning team of Daniel Diehl and Mark Donnelly, Diehl has produced work in two main categories; trade publication and television documentary scripts. His canon of work includes twenty non-fiction books (which have been translated into ten foreign languages), one previous work of fiction and scripts for more than one hundred and seventy hours of documentary television primarily for A&E Network, The History Channel, History International, Biography Channel and Discovery Network.