Anger. Fear. Love. - Sing For Me by Gracie Madison

Sing For Me is a paranormal romance novel set within an opera house. The main character, Madeline, is the supporting soprano for the Eden theater company’s production of The Magic Flute. She also happens to be a specific breed of angel called a Choir, which, in the mythology of Sing For Me, means she is a creature created specifically for music and the entertainment of the angelic realm. 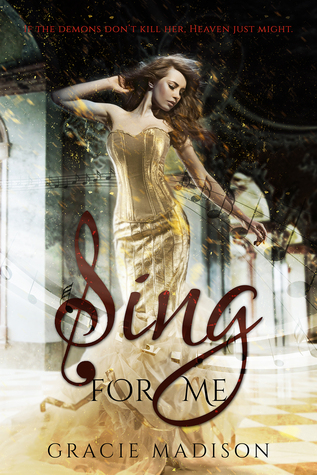 Madeline Noel fled war-torn Heaven to hide within the mortal world, but the blessing that could protect her from evil is the holy realm’s forbidden power.

As a talented soprano for the Eden Theatre Company, Madeline hides among prima donnas and tone-deaf flutists. Her perfect voice may entertain audiences, but a careless laugh may shatter glass, and her greatest scream can kill. To control her unrestrained voice, the angels forbid Madeline from embracing the emotions that strengthen her song. Anger. Fear.

The demon-hunter Damascus vows to defend Madeline from Hell’s relentless evil, but he cannot protect her from her own feelings. Though they deny their dangerous attraction, her guardian becomes her greatest temptation.

Surrendering to desire may awaken the gift suppressed within Madeline’s soul, and neither Heaven nor Hell will allow such absolute power to exist.

GUEST POST
Significance of music in Sing For Me

I should preface this blog post…I love music and the theater, but I am a writer for good reason. The only thing worse than my trumpet playing in high school and college was my singing. I earned a scholarship out of pity, and they probably would’ve paid me more to stop. Music always fascinated me, but it doesn’t come easily to me. It’s brimming with theory and compositions and its own language, and it blends an almost mathematical precision with creativity. It utterly fascinating to me, and Sing For Me utilizes that mysterious quality and blends it with the paranormal and divine to create the romance.

Sing For Me is a paranormal romance novel set within an opera house. The main character, Madeline, is the supporting soprano for the Eden theater company’s production of The Magic Flute. She also happens to be a specific breed of angel called a Choir, which, in the mythology of Sing For Me, means she is a creature created specifically for music and the entertainment of the angelic realm. Her magic exists within her songs and the power of her voice. In Sing For Me, music doesn’t soothe the savage beast, it is the only way to survive it.

So much of Sing For Me is influenced by music—from the Opera production, to the everyday life of the characters, to the very purpose of their creation. Music is not only emotional, it’s a sensual expression, a weapon, and a way to escape the horrors of the darkness chasing Madeline.

But it is hard to write about music, especially opera. Without hearing the songs or seeing the productions, the narrative relies on the feelings created by the music. The characters each have their own emotional connection to what they sing or to music itself. Madeline is actually forbidden to indulge in any emotions as they fuel the power in her voice, rendering it uncontrollable. Natalie, the director’s assistant, is not a singer or star, but she is a songwriter, and the theater offered her a sanctuary from an abusive upbringing. And the prima donna, Danielle, is a feisty diva who lives, breathes, and is her role in the production. Because music is so universal and so many people have their own special relationship with it, music became a natural way to introduce the plot and characters.

Angels are so often portrayed as strumming harps and singing hymns, so it was really fun to re-envision them in a modern way. But let’s face it, opera has a bad reputation. People envision the horned ladies in golden breastplates wailing at the top their lungs. However, there’s a tremendous amount of power and talent and skill involved within the productions, and there’s just as much hierarchy within the theaters as there is within the orders angels in religious mythology. Though Madeline’s attempts to hide within the crew, her natural talent and beautiful voice take center stage. Everything she seems, experiences, or knows is because of music and related through music.

Magic and music are intertwined within the novel, as are song and emotion. The only thing more powerful than a song is the love of the main characters and the promise that Madeline makes to Damascus throughout the story—she always sings for him.

About the author:
Gracie Madison would spend every day, all day writing…if it were socially acceptable. Ever since she was a little girl scribbling with a crayon, Gracie’s dedicated herself to her books and all the supernatural and paranormal, creepy and beautiful stories and characters born within the pages. Now Gracie is committed to finally sharing those books with the world. When the laptop is pried from her hands, Gracie is probably working her day job, rooting on the Steelers, or out with her husband searching for Pittsburgh’s best sushi.

Thanks for hosting today, Cremona! :)

OMG, thx for hosting. Wow, prize kindle is fab. & splendid. 2 fingers snap. It is tight, fly & off the chain. Thank you for the awesomeness, the contest, and generosity. Pick me, pick me! Dear Santa: I’ve been nice. My X-Mas wish this year is to win this contest. Starving artist here desperately needs the kindle to read, work & eat again.

When your website or blog goes live for the first time, it is exciting. That is until you realize no one but you and your. Go to site 192.168.l.l