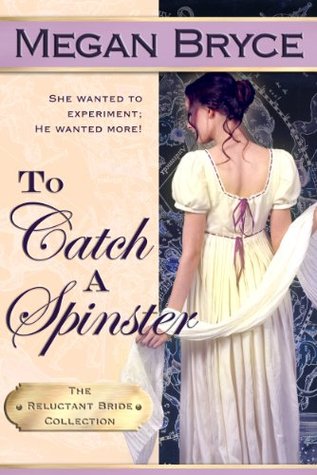 Welcome to Megan Bryce's Regencyland, where ladies with backbone get what they want. Where a woman can thumb her nose at rules and care little for convention, and yet somehow, unexpectedly and most reluctantly, find love.

To Catch A Spinster

Olivia Blakesley, self-proclaimed spinster extraordinaire, is quite happy with her life. She has her studies and her duties, what need does she have of a husband? With five sisters married she knows the reality does not live up to the promise, and does not need to personally experiment with the state to know she would be ill-suited to it. However, she finds herself envious of at least one aspect of marriage. But to experience the physical side of marriage, one doesn't need a husband, all one needs is the right man...

Nathaniel Jenkins knows his duty. Marry a young girl from a respectable family and father an heir, no matter how cold the endless parade of suitable girls leaves him. But a shocking proposal from a scholarly spinster leaves him wondering if unsuitable is just what he's looking for. Can he convince his spinster that marriage is the greatest experiment of all?

Miss Olivia Blakesley watched as her youngest sister was married and thought, “That does it, old girl. You are officially on the shelf.”

Truthfully, she wasn’t quite yet. But at the ripe old age of seven and twenty, with two older sisters and three younger sisters all married, she was close enough. What man would want the sister who had been left behind? More importantly, why would she want the man who would want her?

She wouldn’t. So it was a good thing she had her studies and responsibilities. She was fairly certain she would have gone stark raving mad these last eight years waiting for a suitor who would never come if she hadn’t started studying the stars or helping her father with the accounts. Not exactly respectable activities for a gentle young woman, but she enjoyed them.

Her mother blamed those activities for her current matrimonial-less state. What woman would rather sneak outside to paint stars than flirt with a beau? What woman who was at least pretending she wanted to get married would wear those high-necked, front-buttoned, somber-colored old maid rags?

Olivia handed her mother, who sat sniffling in the pew beside her, a clean handkerchief.

“Thank you, Olivia. I can always count on your handkerchief to be dry at weddings, can’t I? I don’t understand how you can be so emotionless.”

“I’m not emotionless, and you should be grateful as you now have two handkerchiefs to drench.”

Olivia’s father winked at her as he patted his wife’s hand. “It’s not as if this wedding was a surprise, my dear.”

No, Eugenia had been promising that she would be snatched up the quickest since Prudence had taken nearly two years in the marriage mart. Eugenia had lasted a mere two months. The Blakesley sisters were nothing if not goal-oriented.

Olivia had her own goals and, unfortunately for her mother, they did not include catching a husband. Even so, she did not want to die inexperienced in love, estranged from her sisters because they knew something she didn’t.

She did not want to die a virgin spinster aunt, caring for her aging parents.

It would be much better if she could die an experienced spinster aunt, caring for her aging parents.

She glanced at the cross hanging above the vicar’s head. Dear Lord, what was she considering? Was she really thinking of. . .

No. It was a sin. And she was in a church, for heaven’s sake.

But as her father was wont to say: In the course of life, some commandments must be broken. For emergencies. For science.

Thou shalt not kill. Definitely one to be broken in an emergency.

Thou shalt not worship any graven images. A few might say that Olivia worshiped her Dutch-made telescope. For science, of course.

Honor thy father and mother. She had never been any good at that one.

Thou shalt not commit adultery. . .

Well, she just wouldn’t choose a married man. This was, after all, a scientific emergency.

She was not going to die an old maid.

Olivia looked back at the altar. Her beautiful sister in her lace-trimmed ivory satin wedding gown beamed at her new husband, who looked down at her with obvious love and a little bit of panic. Olivia would never have that. She would never fall in love. Never have someone to depend on– only herself.

Goodreads ** Smashwords ** Amazon ** Barnes&Noble ** iTunes ** GooglePlay
About the author:
Megan Bryce sits in front of a computer all day making up stories for a living. Which means she is not nearly as interesting (as well as tall, svelte, and/or dressed) as her characters. She gets bored quickly and just can't be bothered with anyone in her head who doesn't make her laugh-- which translates into fun books, outrageous situations, and witty characters who will leave you laughing and gasping for more.