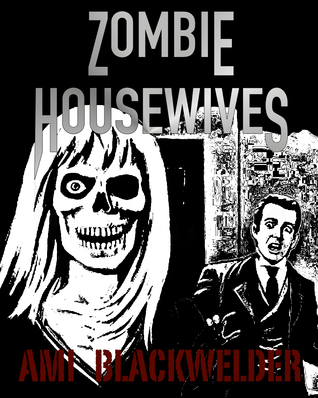 Can Zombies be used as part of an allegory? How appropriate and easily digestible would be such an apologue for the readers who usually fall into two distinct categories: those who read stories about zombies and those that are looking only for, let’s say, the message... Amy Blackwelder had the courage of such approach of the zombie phenomenon and, in my opinion, Zombie Housewives should please both categories. The writer succeeded an excellent balance: there is enough gore, enough suspense and enough “zombie character” for the first category and for the second one there is a disguised social analysis and a disguised message for those that are "trapped" in an unhappy marriage.

History and happiness (more correctly lack thereof) of three neighboring couples, each with its own different problems are not the cause that generated the plague - because this cause is one terrifying by how absurdly banal it is, but the mandatory and contributory factor that triggers the "disease". Frustration, the feeling of incompleteness and finally ... the misery of married life may make us monsters and this time, to sound the alarm, the transformation takes place literally.

Another author’s success is the way in which the minds of Crystal, Jennifer and Carrie apprehend and how they think. The passing from one state to another occurs in limits that are… logical, normal, possible, the eventual exaggeration being used on purpose having the role of emphasizing an idea or another.

I also liked the fact that Zombie Hosewives meets the criteria required to be a truly short story, featuring a small cast of named characters, and being focused on a self-contained incident with the intent of evoking a single effect.

I could even say that it is a good anecdote. Anecdote that is defined as "„a short and amusing but serious account, which may depict a real/fake incident or character” even if in our case the funny part is not in the frontline, but only in the substrate, in the absurd of the story.

TOUR SCHEDULE
Get it free for your Kindle April 22, 23, 24
Goodreads ** Amazon
About the author:

Ami Blackwelder is a Paranormal and SciFi author. Her stories range from Tween & YA to Adult. Growing up in Florida, she graduated UCF and in 1997 received her BA in English and additional teaching credentials. Then she packed her bags and travelled overseas to teach in Thailand, Nepal, Tibet, China and Korea. She has always loved writing and wrote poems and short stores since childhood; however, her novels began when she was in Thailand in her thirties.

Having won the Best Fiction Award from the University of Central Florida (Yes, The Blair Witch Project University), her short fiction From Joy We Come, Unto Joy We Return was published in the on campus literary magazine: Cypress Dome and remains to this day in University libraries around the USA. Later, she achieved the semi-finals in a Laurel Hemingway contest and published a few poems in the Thailand’s Expat magazine, and an article in the Thailand’s People newspaper. Additionally, she has published poetry in the Korea’s AIM magazine, the American Poetic Monthly magazine and Twisted Dreams Magazine.

I love zombies the walking dead is my favorite

Thanks so much for having me on, and readers please stop by my blog and check out my books:) If you sign up for the newsletter you get free books and swag, so give it a go!

It's not your typical zombie book... sounds great!